END_OF_DOCUMENT_TOKEN_TO_BE_REPLACED

Seeking refuge from the storm...

First, lower US rates led America's housing boom and consumer credit/spending boom. This increase in consumption created demand for goods from China. China made things and Americans bought them and the world basked in the glow of a two-piston engine of growth.

The second way low US rates and Chinese investment are inseparable is China's currency peg to the US Dollar. This requires China to inflate when the US inflates. And the trouble with inflation is that it never goes where you want it to. In the US, the Fed's policies have led to a new all-time high on the major stock indexes.

In China, the corresponding credit boom from low rates led to a building and real estate boom. In 2003, Australia found itself in the slipstream of a resource-hungry industrial economy rapidly expanding. It's been there ever since. But now there's turbulence.

Martin Wolf of the Financial Times has even gone so far as to pen an article titled, 'Why China's economy might topple'. Wolf generally speaks on behalf of conventional and institutional thinking. A contrarian would be tempted to view his bearish comments on China quite bullishly. But his main point is that after 35 years of double-digit GDP growth, China will grow more like the advanced economies of Japan in the 1970s and South Korea in the 1990s, at about 6.5% a year.

'First, the potential for infrastructure investment has 'contracted conspicuously', with its share in fixed asset investment down from 30 per cent to 20 per cent over the past decade. Second, returns on assets have fallen and overcapacity has soared. The 'incremental capital output ratio' – a measure of the growth generated by a given level of investment – reached 4.6 in 2011, the highest since 1992. China is getting less growth bang for its investment buck. Third, growth of the labour supply has fallen sharply. Fourth, urbanisation is still rising, but at a decelerating rate. Finally, risks are growing in the finance of local governments and real estate.'

The recovery of iron ore prices after their big dip last August caused a lot of people to brush off Australia's China worries. But between Wolf's five points and Stockman's point about the end of the infrastructure boom, it is impossible to ignore the fact that China can't keep spending money it doesn't have on infrastructure and development projects that generate no real return on capital.

The laws of economics, to the extent that they exist, apply across all borders and all oceans. Money borrowed must be put to productive use. If it's not, assets have to be written down in value or losses have to be taken. The whole of the last five years have been a central bank exercise in making sure the losses don't destroy the world's banking system.

Is there any refuge? Well, for years we've advocated physical gold and silver as a way to extract wealth from the financial system and store it in tangible form. After the confiscation of bank deposits in Cyprus, this seems more prudent than ever. But what's this? Gold is getting absolutely pounded too.

Our favorite yellow metal fell over 1% in New York trading. The Aussie Dollar gold price has dipped below $1400. Sentiment is bearish. Is it time to sell your gold?

If you were a trader, the time to sell gold would have been when it reached $1900. But if you're not a trader, if you're a wealth accumulator, then you'll relish the chance to buy gold at these prices. You should also be prepared for it to go lower still. Have a look at the chart below. 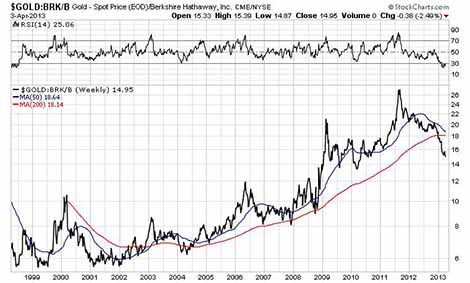 The chart shows how many Berkshire Hathaway 'B' shares it takes to buy an ounce of gold. It's a 15-year chart with weekly prices. Berkshire is a basket of productive enterprises that trades as a stock. You can view it as a proxy for the Fed's efforts to reflate financial asset prices. Gold is gold.

As we've written before, if the ratio goes back to 14 (it's currently at 14.95) it will represent a bottom in gold and a top in stocks. You'd have to assume this would coincide with a big shift in market sentiment. Investors would be back to 'risk off'. You'd see heavy selling of stocks in the second quarter. And after a merciless liquidation of the gold bulls, a bottom in the gold price.

It's all proceeding as planned. The fall in the gold price, and the carnage in gold stocks, will no doubt make many investors and speculators nervous. But that's exactly what has to happen for the bull market to resume its long-term upward trend. If it were a certain trade, everyone would be in it on the same side. The time to hold your nose and buy is approaching.

Open an account with BullionVault today and get access to 24/7 live prices to buy and sell gold and silver...