END_OF_DOCUMENT_TOKEN_TO_BE_REPLACED

A great week in store for those obsessed with the price of money...

THIS LOOKS like being a great week for interest rate fetishists, writes Dan Denning for the Daily Reckoning Australia.

The Reserve Bank of Australia meets on Tuesday to decide what to fix the price of money at in Australia. The consensus view among economists, according to Bloomberg, is that the RBA will cut the cash rate from 4.25% to 4.00%. A lot of keystrokes will be wasted on keyboards explaining how this rate cut will 'boost' the economy and stock prices.

Two more notes about credit in the Australian economy. First, the RBA can cut rates all it wants, but it can't make businesses borrow. This is a lesson learned by the Bank of Japan and the Federal Reserve over the last twenty years. Non-financial businesses (businesses other than banks, in other words) only borrow money if they're confident they can use it to grow earnings and generate a return for shareholders. If they're not confident about business conditions, they don't borrow.

The Australian Bureau of Statistics (ABS) reported last week that businesses borrowed $29 billion in February. That was down from $36 billion in October. It was the fourth consecutive monthly decline in business borrowing. And on a month-over-month basis, commercial lending was down 8.4%.

There are only two ways to look at this. Either banks are being stingier with loans or businesses are more cautious with borrowing. It's probably a bit of both. But our main point is that artificially lowering the price of credit doesn't improve underlying business conditions. True, it might make a project easier to finance. But if your quarterly sales figures are telling you that the economy isn't so hot, why would you borrow?

The final point about credit in the economy is more of a point about consumer price inflation (CPI). The hue and cry for a rate cut increased last week when the ABS reported that CPI rose just 0.1% in the first quarter of the year. On an annual basis, that's just 1.6%.

If you're a fan of higher prices, this is apparently bad news. Prices are not rising fast enough! They may even been falling! How do you know the RBA is in the business of undermining purchasing power? The bank targets annual inflation of 2-3%. That's a true story. The Bank WANTS prices to rise a little bit each year.

In the end, the official CPI figures almost certainly bear no relation to the real world. Does your cost of living seem to be going down? The 'trimmed mean' method of calculating consumer price inflation routinely excludes items deemed volatile. This is a way of calculating inflation that excludes everything rising in price, which tells you pretty much everything you need to know about the calculation.

By the way, the volatile items usually include food and fuel. Though volatile, those items aren't exactly discretionary. Excluding them because they 'distort' the picture of 'real' inflation doesn't really measure 'real inflation'.

What it DOES do is allow you to make the case that the RBA should cut interest rates. And THAT is exactly what people in the financial industry want. More free money to change your life! The more they can borrow, the more they can speculate with.

If you want an example of a market that's on the life-support of low interest rates, take Japan. Over the weekend, the Bank of Japan (BoJ) announced it was expanding its government-bond buying program by ¥5 trillion, or $62 billion. The total budget for buying government bonds was also expanded to ¥40 trillion.

This is the kind of monetary stimulus only a drug dealer could love. It keeps the addict alive and delays his return to health, without provoking his actual death. Better an addicted borrower than a dead one. Central banks have turned investors into a bunch of junkies.

Both the Aussie and Kiwi Dollars rallied on the Japanese news. Even if the RBA lowers the interest rate differential between the Yen and the Aussie tomorrow, official Japanese interest rates will remain low and the BoJ will keep pumping money into the financial system. This policy doesn't promote 'growth'. It prevents a further collapse in financial asset values, which is erroneously being called 'deflation'. 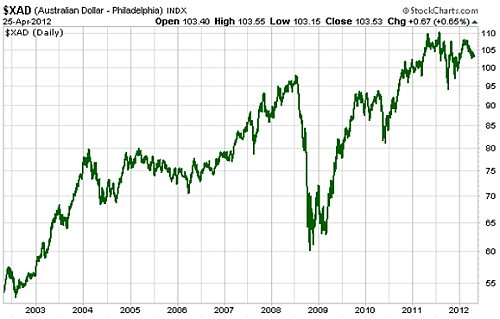 A weaker Aussie Dollar would be welcome news to exporters and manufacturers. But a weaker Aussie would most likely be the result of another major episode in this rolling global debt crisis. More on that possible episode tomorrow.

In the meantime, investors have plenty of evidence to review. All of the evidence points to slower credit expansion in the Australian economy. Businesses that profited the most from double-digit credit rates aren't going to like the new world. And businesses that rely on credit expansion to increase earnings won't much like it either.

What does that leave? It leaves businesses that are able to generate consistently high returns on capital without leverage. To do THAT you need to be in a business where demand is fairly reliable and where your cost of capital and of goods sold is stable.