END_OF_DOCUMENT_TOKEN_TO_BE_REPLACED

More spending maybe hit by bond slump...
EVERY four years the American Society of Civil Engineers (ASCE) releases its report card on the condition of America's infrastructure, writes Frank Holmes at US Global Investors.
In 2017, the group gave the US a dismal D+, writing that crumbling infrastructure "is impeding our ability to compete in the thriving global economy."
The 2021 report demonstrates slight progress from four years ago. America's infrastructure scored a C-minus, the first time in 20 years that our "GPA" is out of the D range.
But as those of you with kids and grandkids know, a C- is nothing to celebrate. Much work still remains to bring our roads, bridges, sea ports, electric grids and more up to satisfactory standards.
That means there may be some incredible opportunities for investors in companies that produce the metals, minerals and other raw materials that will be needed with an increase in spending.
According to the ASCE, the US faces a $2.6 trillion investment gap over the next 10 years. Among the most critical is the nation's 4 million miles of public roadways, 40% of which is now considered to be in "poor" or "mediocre" condition. Deteriorating, congested roads and highways cost US motorists a combined $130 billion every year in wasted time and fuel, not to mention vehicle repair.
The US has been underfunding its roadways for years, resulting in a $786 billion backlog of road and bridge capital needs, the ASCE says.
Not all roads are made equal, though. I'm pleased to report that our home state of Texas topped the list of best states to drive in, based on four factors including traffic and infrastructure, according to WalletHub. Indiana, North Carolina, Iowa and Tennessee rounded out the top five. Hawaii was found to be the state with the worst commuting conditions, followed by California, Washington, Maryland and Delaware. 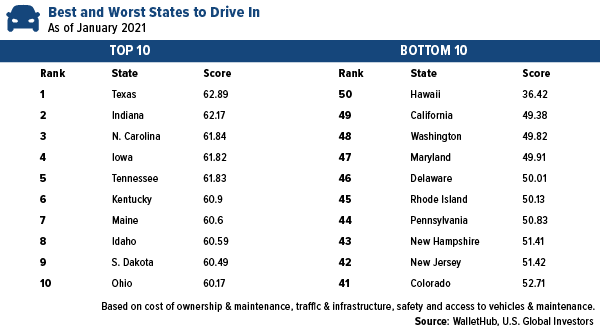 The quality of Texas roads was one of the 11 reasons why I think people enjoy living in the Lone Star State.
The state's power grid, on the other hand, needs some serious attention. As you know, an unusual winter storm last month caused days-long power outages throughout most of the state, leaving millions without electricity, water and heating.
Last month, top energy "experts" recommended that Texas either winterize its electric generation plants – including not just wind turbines but also coal and natural gas plants – or consider connecting its grid with neighboring states, according to reporting by Reuters. Texas is the only US state to operate its own power grid, which is managed by the dubiously named Electric Reliability Council of Texas (ERCOT).
ERCOT's President and CEO, Bill Magness, was fired last week after as many as seven board members resigned in the wake of the power failures. Magness reportedly turned down an $800,000 severance package.
As I pointed out a couple of weeks ago, Texas is the ninth largest economy in the world. Winterizing its aging power grid will be a massive undertaking, requiring biblical amounts of raw materials. Investors take note.
Like his last two predecessors, President Joe Biden has put infrastructure at the top of his list of priorities. Can he succeed where former Presidents Barack Obama and Donald Trump failed?
Reuters reports that the White House has added transportation and manufacturing specialists to its ranks of advisors as the Biden administration prepares to lobby Congress for an infrastructure bill, possibly once the pandemic relief bill is signed. The President and Transportation Secretary Pete Buttigieg also met with House lawmakers to discuss such a plan.
The commitment is there, but rising borrowing costs could put a hamper on things.
The bond selloff continued last week after a mostly positive jobs report, sending the yield on the 10-year Treasury as high as 1.6% on Friday. Bond yields rise when prices fall. To put this in perspective, the yield was trading below 1% in December.
This represents a significant 3 standard deviation (or sigma) move for the 60-day trading period, suggesting the selloff is overdone.

When we look at the 365-day trading period for the past 10 years, the move is even more dramatic.
The probability for mean reversion is very high, but in the meantime, this vertical surge in yields will likely cause unexpected consequences in both equity and debt markets

Watch my video on how to trade gold using standard deviation by clicking here.
The rise in borrowing costs could very well check some lawmakers' appetite for a large infrastructure spending bill at a time when the deficit is already at or near record levels as a percent of GDP. In its just-released budget outlook, the Congressional Budget Office (CBO) expects the US deficit to improve following the pandemic, but then sharply expand as interest payments eventually overtake all other forms of government spending, leaving less for investment in necessities like infrastructure. 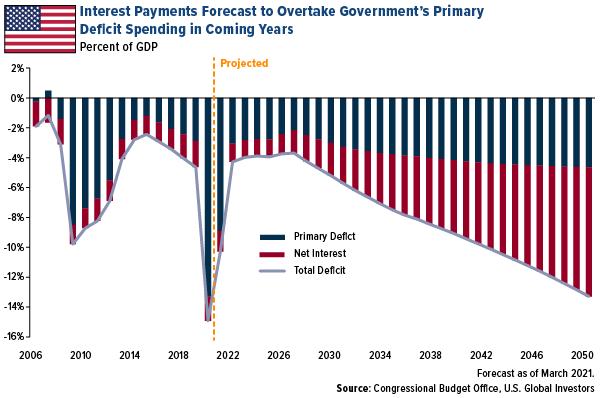 An expected consequence of higher yields? Gold prices are under pressure, having recorded their fourth straight week of losses.
Gold and bond yields share an inverse relationship, as you can see below, but again, it's real yields you want to be paying attention to. When adjusted for inflation, yields remain below zero, making the yellow metal all the more attractive. 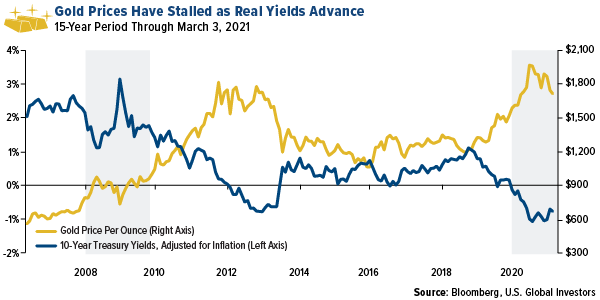 Rising expectations for inflation are also strengthening gold's investment case. Early March saw Federal Reserve Chair Jerome Powell rattle markets by saying inflation could pick up temporarily as the economy reopens from pandemic lockdowns.
Indeed, prices for industrial metals and materials have been climbing as manufacturers around the world expand operations and the number of new orders rises.
Of the 29 nations IHS Markit monitors, 23 of them, or 80%, had manufacturing PMIs above the magic 50.0 mark in February, indicating a synchronized economic recovery. The country with the lowest PMI, at 27.7, was Myanmar (Burma), which is currently mired in a violent coup.
On the service industry side, the US led the world with a blistering PMI of 59.8 in February, the highest reading since July 2014.