END_OF_DOCUMENT_TOKEN_TO_BE_REPLACED

NOT that I have proof, but inflationist gold bugs have driven this 2016 rally in bullion prices so far, writes Gary Tanashian in his Notes from the Rabbit Hole.

I have some charts below to help make the point that people who bought gold and gold stocks due to inflation fears have been driving the gold sector higher since March.

Back in January and February, the HUI index of gold and silver miner stocks rammed upward amid much doubt and skepticism, because the general market backdrop was bearish and even more importantly, the commodity focused 'inflation trade' was nowhere to be found. But at that time, we were calling the deflation story "long in the tooth".

Then silver made a higher low vs. gold in early April, took off and the formerly over sold indicator became very, even dangerously over bought by late April. 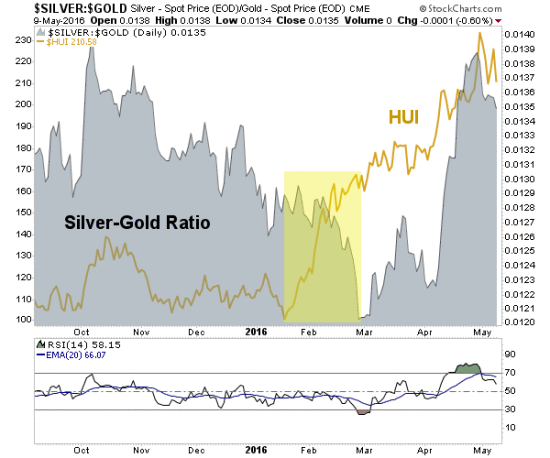 A rise in silver prices vs. gold (ie, a falling Gold/Silver Ratio) is a signal we had long awaited in order to call an 'inflation trade', which is another way of saying an anti-USD trade, a Greenspan-era type situation, after the global deflation and US Goldilocks environment of the last few years.

Gold, silver, commodities, emerging markets, etc. would benefit (with developed stock markets likely remaining aloft), and so they have. The inflation-sensitive items were good for a bounce at least and maybe more out in the months ahead.

But commodities, emerging markets, etc. were due to weaken when silver began to weaken vs. gold (silver having more commodity-like characteristics than gold). The interplay between silver and gold is a sensitive indicator on several conditions, but one of them is definitely the market's ability or willingness to perceive and act upon inflation. So far, the downside in silver-gold has just been a modest reaction, not a correction.

The Commitments of Traders report for gold and silver Comex futures is indicating, and has indicated for weeks now, that speculators are driving a precious metals 'launch' phase and driving a bull market into existence. One point (among others, like ignoring conspiracy theories) I tried to make in this post about the CoT is that while speculation has been driving the metals, it is also going to flame out at some point.

As much as we writers, pundits and know-it-alls complain about the Fed and its long-standing inflation operations, we can admit that almost everyone loves a party and an inflationary backdrop is conducive to the financial market equivalent of partying, deploying capital and making money. Hell, the nature of inflation is to push capital into appreciating asset markets (and away from depreciating currency).

But then there is gold again, which in its counter-cyclical role would say "not so fast"in its ratio to silver. Gold is not primarily about inflation and the Gold/Silver ratio indicates a risk 'off' capital preservation mode when it is rising. While by no means a perfect match, the Gold/Silver Ratio and the US Dollar often ride together and that is why I call them the Two Horsemen. 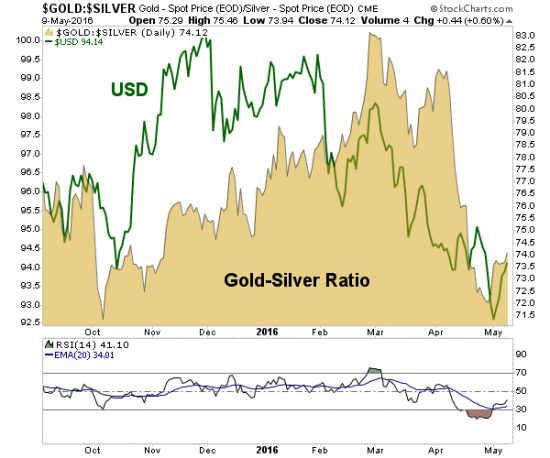 Gold and the US Dollar are receivers of risk 'off' liquidity. But psst, gold has lately been running with the inflation crowd after having been the first mover to the whole enchilada when it bottomed in December. Gold is unique in its asset characteristics, but for 2 months it has not been acting that way.

That distortion is the speculative inflation traders in the gold market and at some point that will matter, and not in a good way.

It could be tomorrow or it could be next year, but at some point inflationist speculators will need to be cleaned out of the market or the gold miners would, over time, become seen as over valued also rans within the 'trade'. That is exactly what happened during the 2003-2007 Greenspan era inflation as gold was an under performer among commodities.

The good news is that this inflation trade can self-correct at any time and clean up the fundamentals once again. It can bounce up and down in the short-term, but we should continue to watch the Gold/Silver ratio for further decline out ahead.

The bottom line is that gold mining fundamentals are actually fed when silver declines vs. gold and by extension, commodities (representing some mining cost inputs) also decline vs. gold. Ironically, when inflationist gold bugs get on the soap box ("buy resources...gold is silver is copper is oil is hogs is corn, the US Dollar will crash!") imploring we protect ourselves vs. inflation, gold stocks can rise strongly but such a rise is usually against the sector's own fundamentals. This can happen in microcosm like it is currently or in a larger phase, like 2003-2007.

For proof look no further than the Gold/Oil ratio (GOR) and HUI. Fuel-intensive mining operations benefited from the huge leg up in GOR's continuing bull market. But what has happened since early February? Why, a mini crash in GOR. It is actually a higher low in an ongoing long-term bullish indicator, but work with me here.

Gold mining financial results have benefited from the impact of rising sector fundamentals. This really kicked into gear in January and February before sagging into the quarter's end in March. The result was a smoothed out general rise in gold mining fundamentals right through Q1 reporting (currently winding down). Not just by the GOR view, but by a host of sector and macro fundamentals, including gold's performance vs. stock markets and currencies. 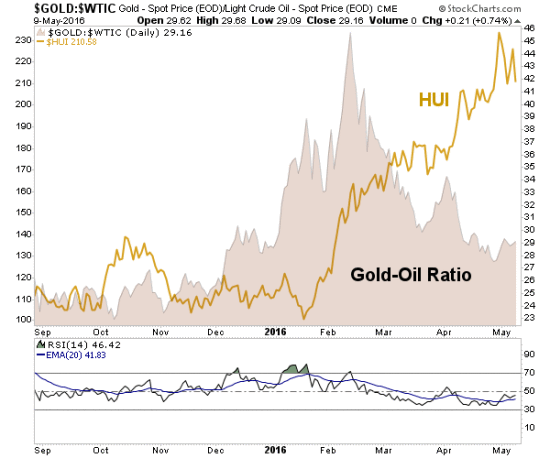 The point is that it has been a good ride, with silver and a bounce in inflation expectations out front leading the charge for the last couple of months. But the gold miners were the early leader and are different. If inflation bulls begin to see silver fade vs. gold and the commodity complex sell off they will barf up the gold miners too. The US Dollar could be firm against all of this as it pulls in risk 'off' liquidity (USD has been bouncing but remains bearish in its intermediate trend).

But then the cycle starts over again. I am not going to let one day's hard drop get me micro managing whether or not a real correction is starting because this rally has eaten alive anyone who has tried to forecast its demise (and there are still valid targets open that yesterday's downside did not negate). But it will end and indeed it needs to end sooner or later so that a cycle can start again.