END_OF_DOCUMENT_TOKEN_TO_BE_REPLACED

The Gold Price may be the most durable price of any commodity as inflation hits...

2011 is the year when inflation will act as a wrecking ball, writes Chris Mayer in The Daily Reckoning.

Inflation seems to threaten everything – from emerging market stocks to the pretty earnings narrative of the global equity market as a whole.

I use the term "inflation" here as the man on the street does. It means prices for most everything goes up. It is not the best definition, because it obscures the reason why prices go up in the first place – the fact that governments can't help but print lots of money. But let us not wander off course. Inflation is what it is.

Think about the big emerging markets for a moment. They have been so important to the investment story of the last decade, for sure. Yet rising food and energy prices pose a big risk. In India, food price inflation is at its highest level in more than a year, rising 18%. The dabbawalla, when he is done delivering lunchboxes, trots off to the market and finds that the price of onions has doubled in only a few months. Even the basics, like potatoes, have become expensive to the average Indian.

One 54-year-old cloth trader in Mumbai complained: "It seems everything is going up in price, from vegetable and meat to diesel and household cooking gas. We are always worried as to what is next."

Food prices are again becoming a serious issue, as they did in 2008 when the last global food crisis brought riots in 30 countries worldwide. The UN tracks an index of 55 food commodities, and that index rose for the sixth straight month in January and is, in fact, above the previous high set in June 2008.

Across in China, the typical Chinese also faces rising prices for nearly everything. The official inflation rate recently hit a 28-month high. But it's the surging price of coal that may prove to be China's Achilles' heel, at least in the short term. Coal is what powers the great boom in China. And coal is at two-year highs.

The basics like food and energy are like brakes on these economies. I think it would be surprising to see China continue to grow 8% a year in a world of $100 oil – at least initially. Solutions are found, in time. But the US and the more mature economies are not immune to rising food and energy prices either.

The thing is it is early in this story yet. Inflation will likely get much worse, if history is any guide. Everyone seems to know the US inflationary story of the 1970s. The official inflation rate hit nearly 14% by 1980. In other countries, it was worse. In the UK, inflation topped out at 27%. In Japan, it was 30%.

Now, the 1970s' inflation was not that long ago. Who is to say how bad things could get today? We will see, and we will watch things closely. Because in the stock market, inflation poses its own challenge to earnings. Thus far, out of the March 2009 bottom, earnings have exceeded expectations. The market has danced accordingly.

But rising prices for commodities now mean that many companies will face cost pressures. Whether they are able to pass on those increases to consumers and maintain their profit margins (and sales) is the challenge. What's more, expectations of corporate earnings have shifted. The market has risen to date on the back of a skeptical and pessimistic earnings view. As all bull markets do, it has successfully climbed that wall of worry. Yet cheerful forecasts make for a market vulnerable to near-term disappointment. The consensus forecast is $96 in earnings for the S&P 500, which would top its record mark in 2006. For the upcoming quarter, the consensus calls for a 29% increase in earnings from a year ago.

We won't have to wait long to see some early indications if that forecast is likely or not, as latest earnings reports start to roll in this week. Regardless, I'm convinced inflation is going to become the story in the markets this year. There are a number of investment consequences of the above.

Since we are still early in the inflation curve, I think commodity businesses ought to do okay, for the simple reason that what they sell adjusts almost instantly to the effects of inflation. Oil companies, coal miners and farmers don't apologize for the prices of their goods. A barrel of oil is a barrel of oil, and you either pay the price or you don't get it. It's not a bag of Doritos, for which you can switch to a knock-off brand if they raise the price on you.

But not all commodities will be on such footing. Take US lumber prices. I found this next chart very curious: 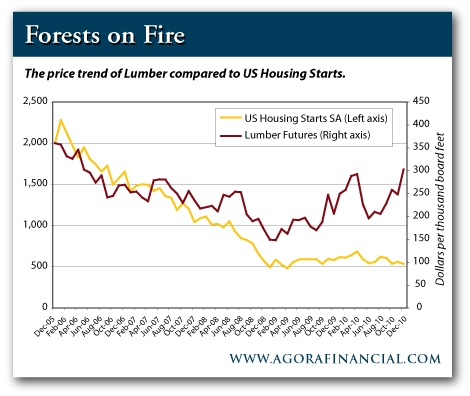 As David Wilson of Bloomberg points out:

"Lumber has bounced back to prices seen during last decade's boom in US housing even though the homebuilding industry, one of the biggest sources of demand, is still in a bust."

How so? Chinese demand. But the increase is from a temporary surge. China is trying to reduce its dependence on Russia, which is China's largest timber supplier. Perhaps it is a long-term shift. Or perhaps the Russians will sweeten the deal to get back their market share. If so, then the earnings of Plum Creek, Rayonier, Weyerhaeuser and other US log producers may enjoy only a brief day in the sun.

In the commodity realm, I prefer longer-lasting advantages. Oil, for example, has held up well, and we know how difficult and expensive it is to find new sources of supply. The Gold Price may be the most durable price of any commodity, especially as the inflation thesis plays out. For equity investment, I'd stick with the smaller miners, because I think inflation will make it more attractive for big Gold Mining producers to buy smaller ones than to create such production from scratch.

Despite this big-picture guesswork, I think it will be important to be choosy in equity investment. First, the recent stock market rally has lifted all boats, even the leaky ones. But over the long haul, the leaky ships will still sink. It will pay to be in the right names. Second, you always have to consider the consequences of being wrong. You'll fare better in such cases with a quality name, well financed, led by talented people and acquired at a cheap price. Such investments will likely make you money over time, even if you get the big picture wrong. This is what smart investing is all about.

Buy Gold at the lowest prices, and store it – securely – in the world's safest vaults for as little as $4 per month using the award-winning, mining-industry backed BullionVault...