END_OF_DOCUMENT_TOKEN_TO_BE_REPLACED

Everything is up. Where is the value...?
VIOLENT protests have erupted in the streets of Bogota, Cali and other cities in Colombia, writes Frank Holmes at US Global Investors.
The immediate cause? Proposed reforms to the South American country's tax system, which would have lifted taxes on everything from salaries and dividends to fossil fuels, single-use plastic items and more.
According to reports, the protests have involved citizens of all walks of life, including truckers, taxi drivers and health care workers. Overworked doctors, nurses and paramedics have walked off the job to bring attention to salary delays.
In response to the unrest, Colombian President Ivan Duque announced on Sunday that he was withdrawing the tax reform proposal. The country's finance minister resigned the following day.
But the protests continue, just as they did in Hong Kong in 2019 and 2020 after a controversial extradition bill was canceled. At least 24 Colombians are believed to have lost their lives so far during clashes with police.
It's against this incendiary backdrop that US lawmakers are having their own tax reform debate.
President Joe Biden seeks to make a number of adjustments to the tax code, including raising the top income rate to 39.6%. The tax on capital gains, currently at 20%, would be doubled. And corporate taxes, which were lowered to 21% in the Tax Cuts and Jobs Act of 2017, would increase to between 25% and 28%. 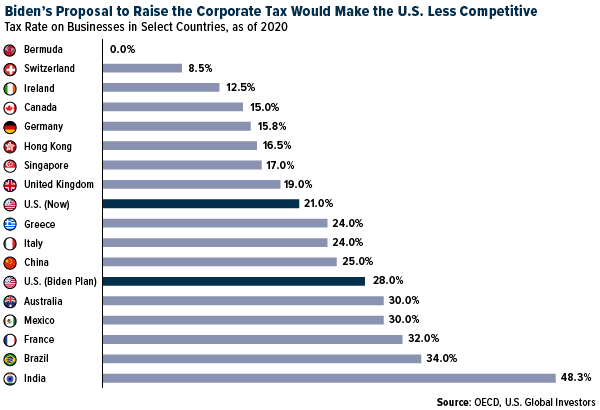 Before 2017, the top US rate on corporate income was 35%, making it one of the highest rates in the world – higher, even, than Mexico, France and Brazil.
I and most other executives celebrated the change because it made the US far more competitive as a place to do business in. As I've said many times before, money flows where it's respected most. Around the time of the tax bill's signing, private business investment in the US came rushing back, before stalling in late 2019 as the global economy slowed and articles of impeachment against President Donald Trump looked more and more likely.
Now, as domestic investment is finally starting to trickle back following the worst of the pandemic, the US risks scaring money away again by raising corporate taxes.

To make matters worse, Treasury Secretary Janet Yellen said last week that she and a number of other finance ministers are actively negotiating a global minimum tax on corporate income. If implemented, the decision would stand as yet another example of unelected bureaucrats imposing anti-capital, anti-competition policies on the rest of us.
Obviously I don't condone the violence we're seeing in Colombia right now, but I view it as a cautionary tale of what could happen when people are faced with the real possibility of having even more of their hard-earned money withheld from them.
One of my all-time favorite quotes comes from Winston Churchill, who was just as witty as he was a great leader: "We contend that for a nation to try to tax itself into prosperity is like a man standing in a bucket and trying to lift himself up by the handle."
On the contrary, countries have found prosperity by eliminating taxes. Take China. In 1978, Deng Xiaoping created special economic zones (SEZs) along the coastline, in cities such as Shenzhen, which invited millions of Dollars in foreign investment to pour in. It's hard to imagine China becoming the second largest economy had this decision not been made.
It may be no coincidence that the value of the US Dollar decreased more than a full percent against a basket of international currencies. This comes as hedge funds and other speculative investors have increased their net short positions against the greenback in recent weeks.
What's more, the International Monetary Fund (IMF) reported that the share of US Dollar reserves held by global central banks fell to 59% in the fourth quarter of 2020, a 25-year low that's down from 71% since the Euro made its debut in 1999.
What does this mean for assets that are priced in US Dollars such as gold? As you might have expected, the yellow metal jumped back above $1800 an ounce for the first time since late February. Gold rose more than 3.5% for the week, beating its digital counterpart Bitcoin, which remained mostly flat.
The US Dollar Index is currently at 90.2. I believe if it traded below 90, it could trigger some technical gold buying as inflation concerns mount.
That's precisely the reason why legendary investor Sam Zell finds gold attractive right now. The Equity Group Investments founder told Bloomberg Television last week that he was seeing inflation "all over the place."
"You read about lumber prices, but we're seeing it in all of our businesses," Zell said. "The obvious bottlenecks in the supply chain arena are pushing up prices. It's very reminiscent of the '70s."
Indeed, one of the most obvious signs of inflation is rapidly expanding commodity prices, which rose to their highest since 2011 last week. For the 12-month period, the Bloomberg Commodity Index has returned close to 70%, one of the best runs for raw materials in recent memory. Meanwhile, copper, a bellwether of economic growth, touched a new record high of over $10,400 a metric ton. 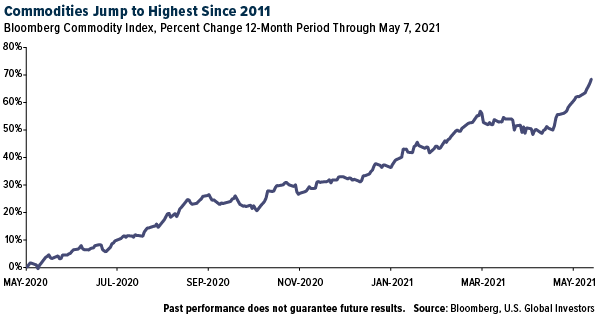 I don't see asset prices pulling back in the short term, given the ongoing risk of inflation and debasement of the US Dollar. Copper could very well be headed for $13,000 or more, so it may be worth staying long if you already are.