END_OF_DOCUMENT_TOKEN_TO_BE_REPLACED

Gold/silver ratio says same as US bond yields...
WE ANTICIPATED well ahead of time that the summer inflation cool-down would continue, says Gary Tanashian in his Notes from the Rabbit Hole.
Using the monthly chart of the 30-year US Treasury bond yield as a visual guide, the idea was that the inflation uproar of Q1... 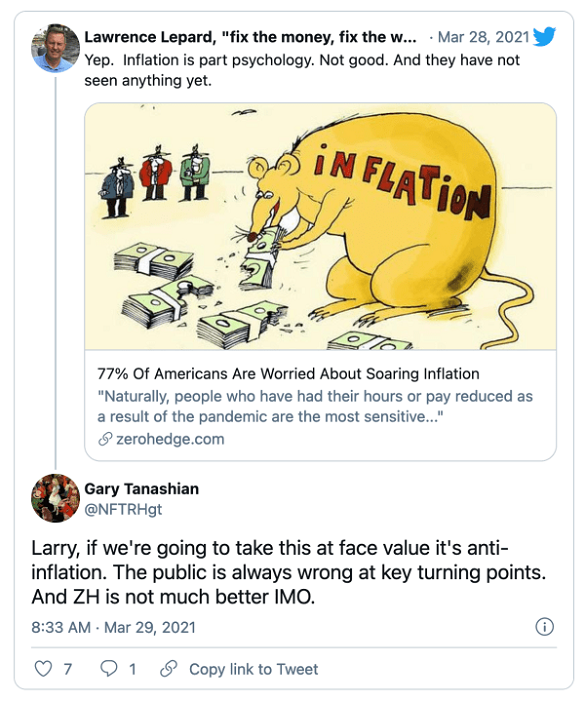 ...needed to be tamped down, preferably to a roughly symmetrical right side shoulder to the one on the left side of a would-be inverted H&S. 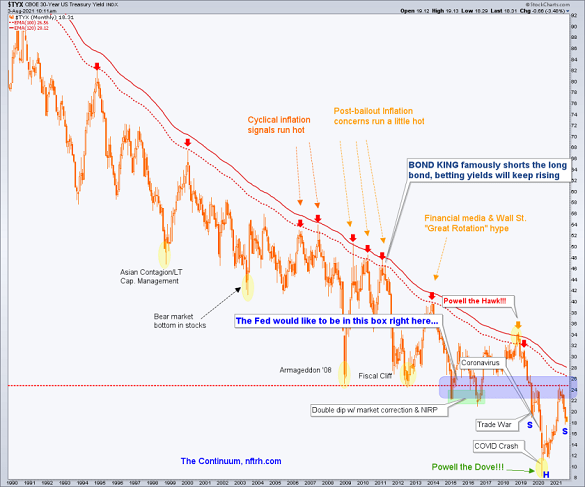 While the macro is still in that process, other macro signals are also in decline along with the right side shoulder above.
Let's dial in and look closer.
The yield curve had been steepening under inflationary pressure and now it is flattening due to dis-inflation or at least a moderation of that pressure. When it steepens again folks, there is no assurance whatsoever that the steepener will be inflation-driven as before. It's important to remember that inflation or deflation can drive a curve steepener (with very different implications, obviously).
Credit spreads (eg, junk/investment grade shown here) are bailing out of the speculative mindset driven by...oh yeah, the Fed's inflationary operations of 2020. Inflation expectations are also certainly not inspiring at the moment.
My personal Canadian credit spread (of sorts) – the speculative TSX-V vs. the senior TSX – abdicated the inflationary view about the same time the yield curve (above) did. It is and has been a negative macro warning on the fly.
Finally, the daddy of all indicators (well, along with the Continuum) in my world, the Gold/Silver ratio has been flashing a potential base from which it could turn up.
Let's flip it over to its Silver/Gold ratio version and see a picture that could turn nasty. If it does and the US Dollar regains its composure after the roads & bridges (etc.) bailout last week the macro could abort not only the cyclical inflation, it could get flat out nasty. 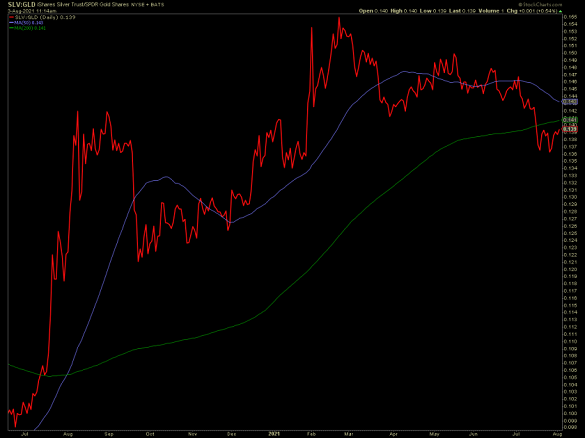 I am not presenting this stuff to be some kind of doom-saying blogger. I am presenting it because whether you subscribe to NFTRH or not, if you visit this website you see presented some of what NFTRH works on consistently.
At important junctures like this I think it is appropriate to have the site be of value to those who are not one-way casino patrons trying to always make coin.
The above danger signals may also act as levers. After all, when beginning the summer cool down thesis, we presented it as just that, a cool down, a temporary way station from the inflationary hysteria. These levers could jerk the Fed out of its stance of fretting audibly about inflation (that was soooo July) and into a new inflationary production mode. We just don't know.
The Fed needs permission, after all. The Vampire needs to be invited into your (macro) house. There's nothing like a deflating macro to do that trick. Then the question becomes, will they be effective at renewing the inflation in any sort of an orderly way if the massive thing they built in 2020 starts cascading down?