END_OF_DOCUMENT_TOKEN_TO_BE_REPLACED

Inflation in energy, that's the cost...
POLICYMAKERS can't keep inflation at 2%, but they think they can keep the world's temperature from rising 2° Celsius, writes Frank Holme at US Global Investors.
That's how CLSA's equity strategist Damian Kestel describes the goings-on at COP26, the United Nations' climate change conference taking place now in Glasgow, Scotland.
The attending leaders and policymakers may look like they're in control, Kestel said in a note to clients, but "a quick look at debt levels, inflation and yield movements suggest they are increasingly now mere passengers along for the ride and painted into a corner."
Indeed, global debt is fast approaching a head-spinning $300 trillion. Here in the US, national debt will soon top $30 trillion, while debt-to-GDP currently stands at 126%.
Inflation is looking less and less "transitory", and make no mistake: Transitioning to a zero-carbon energy mix as quickly as climate scientists are urging will be highly inflationary.
Investment in fossil fuels is rapidly falling, which is driving up energy prices, and yet most economies are nowhere near ready to move to 100% renewables. That includes the US, which was one of a few large countries – the others being China, India, Japan and Australia – that did not sign the pledge last week to phase out the use of coal.
Europe is already feeling the pain of soaring energy costs. Under the European Union's Emissions Trading System (ETS), companies must pay a tax to emit carbon. This tax has gone up sixfold over the past 10 years, and it's doubled in the past year alone.
The bloc is now proposing so-called carbon border adjustment mechanisms (CBAMs), which are taxes on imported goods, such as steel and cement, that are produced in countries that lack tough climate laws. 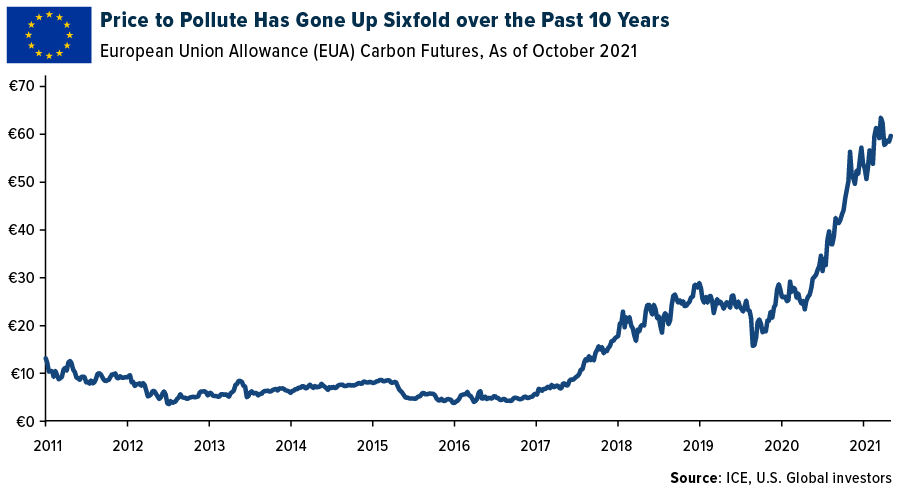 These higher expenses on businesses will then be passed on to customers, and those that will suffer the most are poor households. Winter is right around the corner, and European governments fear that many families, who are still reeling from the economic impact of the pandemic, may be left in the cold.
Nevertheless, a growing number of countries are now committed to net-zero carbon emissions. This is the reality, ready or not. Activists and policymakers say climate change is the number one threat of our time, and that doing nothing is not an option.

That may be the case, but we must acknowledge the impact this historic transition will have on inflation and debt levels. Whereas the former is a hidden tax on current economic growth, the latter is a tax on future growth.
Guess what percent of a typical wind turbine is steel.
Depending on the source, the answer is between 70% and 80%.
As Wood Mackenzie's Ed Crooks put it in a blog post last week, "Steel is one of the great paradoxes of the energy transition." Although it's essential for renewables technologies, the material "accounts for about 7% of total carbon dioxide emissions from energy use," Crooks says.
And yet, for now, we need the stuff.
The same goes for copper, the global demand for which is expected to double this decade, from 2.1 million tonnes in 2020 to 4.3 million in 2030.
Copper is off its all-time high set in May, but it's still going for double its price in March 2020. Many people expect the metal to continue increasing in value, which is why we've seen an increasing number of copper wire thefts lately.
The smart money also appears to be preparing for higher inflation by loading up on Bitcoin. According to blockchain data provider Chainalysis, Bitcoin "whales" – or those that hold more than 1,000 BTC – added 185,000 BTC in the week ended October 25. This was enough to bring total holdings up to their highest levels so far in 2021.
Meanwhile, Bitcoin supply isn't keeping up with demand, an imbalance that will only accelerate as more and more people participate and the mining difficulty increases. 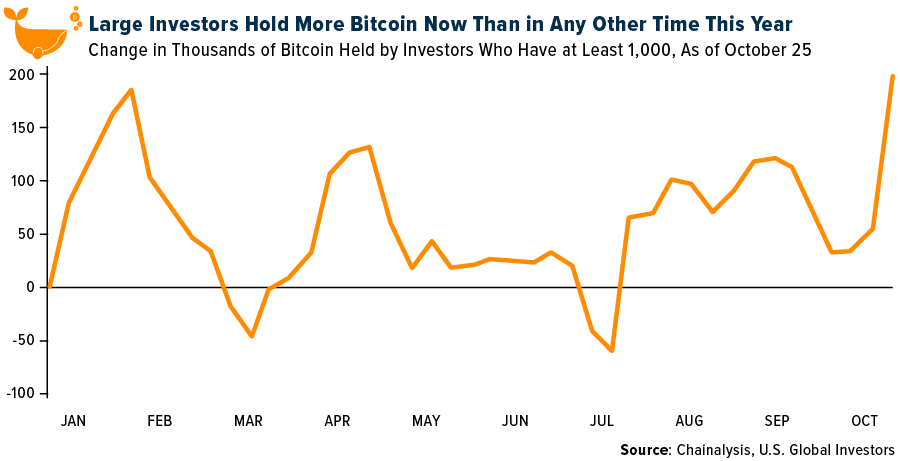 Remember, Bitcoin supply is capped at 21 million coins, and there are 7.8 billion people. You do the math.
Bitcoin may look overvalued at today's prices, but I believe we're still very early.