END_OF_DOCUMENT_TOKEN_TO_BE_REPLACED

A VAMPIRE needs to be invited in order to enter your house. So the story goes, writes Gary Tanashian in his Notes from the Rabbit Hole.

But in this case, we are talking about the Macro house, with its nexus in the USA and its central bank in Washington.

You see, the Federal Reserve inflates money supplies as a matter of doing business, which is why I noted so strenuously in Q4 2018 that Jerome Powell's then-hawkish stance in the face of a declining stock market made perfect sense...

...because the 30-year Treasury bond price was not bullish; it was bearish and getting more so under the pressure of rising inflation expectations.

But now the inflation gauges are losing pressure. As we noted before, Goldilocks is being threatened.

Back in Q4 the Fed had a threat if its own to deal with, as the repercussions of its previous inflationary operations could be exposed to the light of day by the breakout through the Continuum's limiter if it were not arrested promptly.

The orange arrow on the chart below shows the point of concern for the Fed. 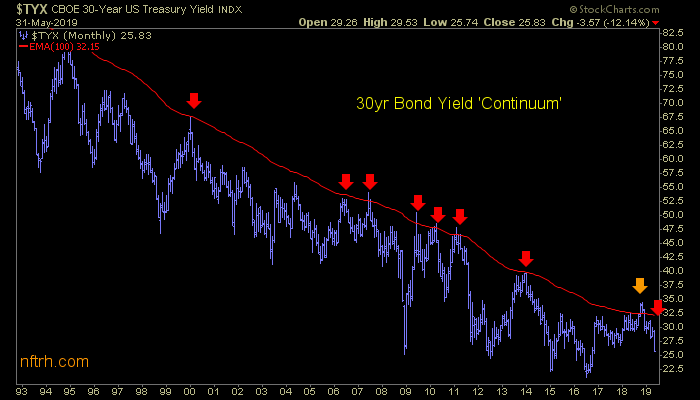 And what do you know...the Continuum's limiter held yet again.

Our thesis of the time was that an impulsive breakout in long-term bond yields would end the Fed's inflationary racket and thus, end the Fed itself (as we know it). Our view was that given the choice between an imploding stock market and a fatal breakdown in the long bond (break up in the yield) the choice for the Fed would be a no-brainer.

Starting 2015, the Fed had countered cost-push inflationary pressures – injected through fiscal (politically) stimulative policy – by withdrawing liquidity until something breaks. As we wrote in December:

"Ironically that has involved raising the Fed Funds interest rate and withdrawing QE, which theoretically would raise long-term yields. But when something breaks, the risk 'off' herd buy the bond, driving yields down."

And as to the last sentence above, the herd buys the bond and invites the damn vampire into the house!

You see, the current Continuum looks a lot different now than it did in Q4 2018, doesn't it? Inflation is absolutely not an issue right now and if it is an issue, the issue is that it is not high enough to sustain bloated bubble markets that depend on more inflation to come.

What is happening now is that the Fed's inflation gun is being re-loaded, gold is breaking out again, and of course the CME Fed Funds futures boyz have been predicting increasing odds of a rate cut in 2019 as the year moves along.

By piling into the long bond, market players (man, machine, casino patron, Ma & Pa) are inviting the Fed's next inflationary action. Unlike in Q4 2018 when Trump was haranguing the Fed chief relentlessly, the table is set and the vampire is coming to dinner. 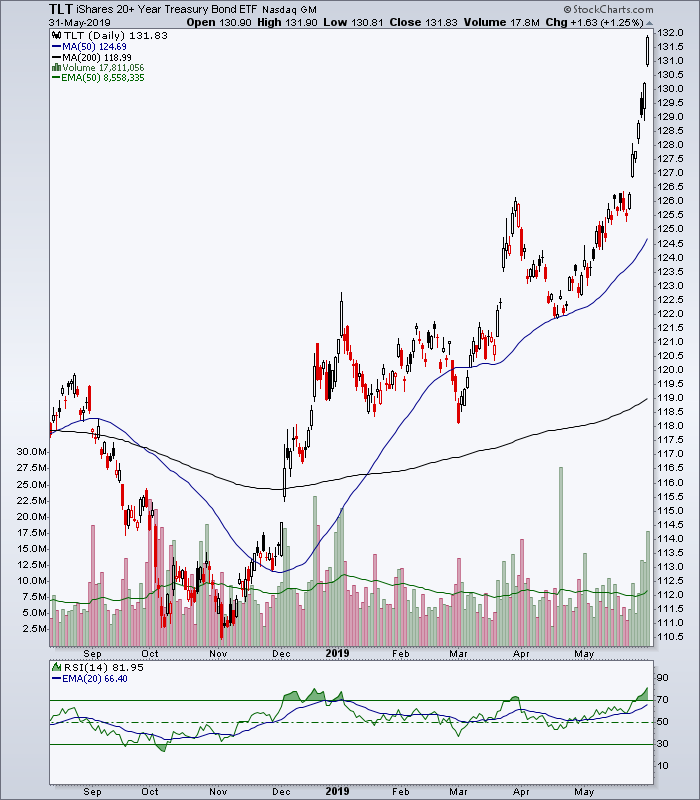 Aside from T bonds, the gold sector is the first and best mover in pre-inflationary cycles like this. The move usually comes amid destruction in the cyclical world. We noted some of the improving macro fundamentals for the gold sector last week. Some markets you would not expect are out-performing the US.

It all makes (macro) sense and so it is recommended that casino patrons shift from a US-centric view and also start taking precious metals more seriously now. After all, that sector was under revolt from its own patrons just a couple days ago.

The Golden Bull Horns sounded back in February, the sector was appropriately punished and lessons were learned (yet again). But as with the cleaner backdrop that the Fed operates against today vs. Q4 2018, gold bug sentiment is much cleaner than it was in February – and as a bonus, the inflationists are all gone.