END_OF_DOCUMENT_TOKEN_TO_BE_REPLACED

That's your inflation fears fixed...
JUST imagine, says Dan Denning, co-author of The Bonner-Denning Letter.
You run up a $28 trillion national debt ($15.7 trillion of it since 2009)...
...you increase the assets at the Federal Reserve by $3.4 trillion in just over a year...
...and you lower interest rates so that total debt in America goes from $54.6 trillion in 2008 to nearly $82 trillion today...
And then you're surprised when people start to worry about inflation?
Ten-year bond yields spiked after Federal Reserve Chairman Jerome Powell said the opening up of the economy could "create upward pressure on prices."
Remember, the 10-year yield was just 0.508% in August of last year. It's up over 100 basis points since then. The bond market thinks inflation is coming.
It has to come, with M2 – a broad measure of the money supply – growing at more than 25% on a year-over-year basis, due to the feds' money-printing.
But an economy with so much debt can't afford higher interest rates.
And now you know why the Nasdaq "corrected" by more than 10% from its all-time high of 14,095 in early February. Or why, at writing, Tesla is down over 20% from its all-time high. Higher interest rates are coinciding with high stock valuations to cause a sell-off in tech.
Don't get me wrong. Recent Tesla "investors" may be out of the money at the moment. But it's still been a spectacular run over the last 12 months. Even after the recent 20%+ drop, Tesla shares are still up roughly 840% since last March.
Likewise, one bad day in the bond market doesn't mean the bull market in Treasuries is over.
Or does it?
That's the question investors are wrestling with. Higher interest rates are death for bonds. They're death for an economy saddled by debt. And without more debt-fueled growth, it's hard to justify higher valuations on stocks that are already expensive.
Where can you hide?
Energy was the standout performer in this month's selloff. West Texas Intermediate (WTI) crude oil futures went up almost 6% to $64.79. The Organization of the Petroleum Exporting Countries (OPEC), which cut oil production by 7.7 million barrels per day, is being advised by Saudi Arabia not to raise production until May. (Saudi Arabia has cut its own production by 1 million barrels per day.)
You also have a new report out from the Dallas branch of the Federal Reserve. It concludes that a federal ban on new leases in federal land in the Permian Basin (Texas and New Mexico) will lower US oil and gas production. Lower production coupled with higher demand from the "opening" of the economy results in...wait for it...higher prices!
The logic of our new "Trade of the Decade", which we unveiled to our Bonner-Denning Letter subscribers in January, was that after 10 years of dismal performance for the entire sector, energy couldn't possibly do any worse. (That is, unless fossil fuels go away altogether, which is not going to happen.)
The so-called Energy Transition, where we all drive electric cars powered by windmills and solar, is a nice dream. But to get there, we're still going to need oil and gas.
What you have now is the confluence of a natural, cyclical mean-reversion in the energy sector...PLUS a huge amount of fiscal and monetary stimulus, resulting in higher inflation (and higher inflation expectations, which is an important part of the psychology of inflation).
The chart below shows that personal consumption has nearly recovered to pre-pandemic levels of over $14 trillion (annualized). 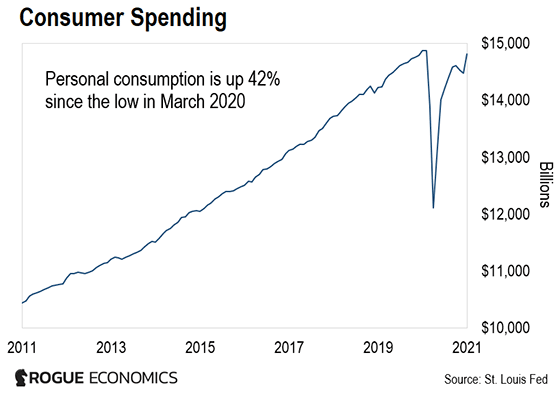 And if that was not enough to get you worried about inflation, there's more stimulus coming!
Earlier this month, Congress passed the Democrats' $1.9 trillion stimulus package, with plenty of fat and pork for New York, California, New Jersey, and Illinois. On Thursday afternoon, President Biden signed it into law.
Also, keep in mind the Federal Reserve is STILL pumping $120 billion a month into the financial system. It's doing so through $80 billion a month in purchases of US Treasury bonds and $40 billion a month in mortgage-backed securities (MBS). The Fed's balance sheet has grown by $3.35 trillion in the last 12 months – from $4.24 trillion to $7.59 trillion.
It's all adding up to an economy that's on the verge of "running hot." Economies are not machines. But they do require energy. The post-pandemic recovery, plus easy money policies, plus the dearth of capital investment in the energy sector over the last 10 years are ALL providing a nice tailwind for our Trade of the Decade.
It's early days. And the Fed is bound to say something about yield curve control and its plans to control inflation. The next meeting of the Federal Open Market Committee (FOMC) is March 16-17. If rates go higher and stocks go lower before then, the market will be hanging on every word of the FOMC.
Don't make it more complicated than it has to be. The financial system and the economy never fully recovered from the 2008 crisis. Since then, rates have gone lower and stock and bond prices higher.
Now, we have a giant equity bubble, a giant bond bubble, and a financial culture engaged in historic speculation on entirely new types of assets (cryptos, for example).
Land, gold, and guns may not be terribly liquid. But I suspect that in the long run, they will be better stores of value than stocks, bonds, or cryptos.
At The Bonner-Denning Letter, what we're aiming for is the preservation of our savings, and "functional wealth" that can be used to improve our quality of life while things fall apart in Washington DC.
The inevitable crisis of this system will take years to play out. But we're at a particularly sensitive stage right now – where it begins to dawn on investors that at a certain point, inflation destroys real wealth.
Plan accordingly.
By the way, the New York Times recently predicted that $4/gallon gas is coming this summer. Here's why...
Producers either can't or won't increase production as demand rises. Plus, the Biden Administration slapped a "temporary" ban on new drilling and exploration licenses on federal lands in its first week.
What do you think happens when a boom in demand hits limited supply?
For us, it means our Trade of the Decade is starting off very nicely indeed.