END_OF_DOCUMENT_TOKEN_TO_BE_REPLACED

Sure, you need some. But that much? Really...?
NEARLY all savings accounts at US banks are insured by the Federal Deposit Insurance Corporation (FDIC) up to $250,000, writes Frank Holmes at US Global Investors.
But beyond that, it makes less and less sense for savers and investors to use them.
Households that continue to keep a significant portion of their wealth in the bank should be aware that inflation is eating their lunch at a rate I've personally never seen.
Take a look at the chart below, which comes from J.P.Morgan's September quarter Guide to the Markets report. In particular, I want you to look at the bars, which represent average annual income earned on $100,000 in a savings account. The blue lines, meanwhile, represent the income that's needed to beat inflation. 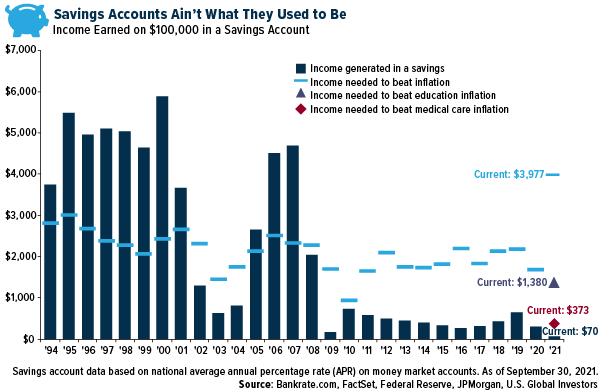 In the 1990s, households generally did well by using savings accounts. Inflation rarely ran above 2% year-over-year, and interest rates were above 5%.
Ever since the financial crisis, though, savings income hasn't kept pace with inflation. The Federal Reserve slashed rates to near 0%, where they've more or less remained. Savers fell underwater.
But then 2021 happened. Due in large part to massive global supply chain disruptions, inflation has jumped to levels unseen in decades. (And this doesn't even take into consideration so-called shadow inflation.)
As a result, the spread between the average income generated in a savings account and the income needed to beat inflation has never been wider. We're talking about a difference of $3,907, based on a savings account holding $100,000. What could have been a mortgage payment, a weekend vacation or down payment on a new car instead went poof due to the invisible tax known as inflation.
Most savvy investors are familiar with tax efficiency. They may structure their investments and use certain instruments, including tax-free municipal bonds, to pay the least amount of taxes allowable.
Inflation is a hidden tax that I don't think enough people account for. They feel the pain at the pump and grocery store, but seldom do they see it with their wealth. If they did, the personal saving rate for the US wouldn't be as high as it is right now. Although it's fallen from all-time highs, the share of disposable personal income (DPI) that's still sitting in bank accounts remains elevated. 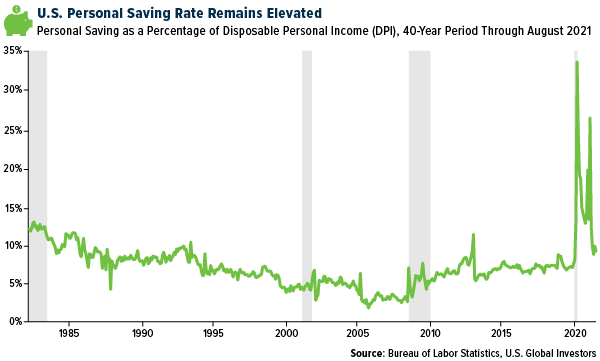 But as Warren Buffett famously said, "If you don't find a way to make money while you sleep, you will work until you die."
(Leave aside for a moment the fact that Buffett, at age 91, is still working fulltime as CEO of Berkshire Hathaway.)
Many investors diversify using a number of alternative assets, including art and real estate, but my favorite ways include gold and Bitcoin.
Right now, gold is extremely unloved. The metal is down some 6.5% for the 12-month period and down more than 14% from its all-time high set in August 2020. I believe this makes it the ultimate contrarian investment.
What's more, a number of gold mining stocks look very attractive right now, with many of them generating remarkably higher free cash flow yields than the industry as a whole and the S&P 500. 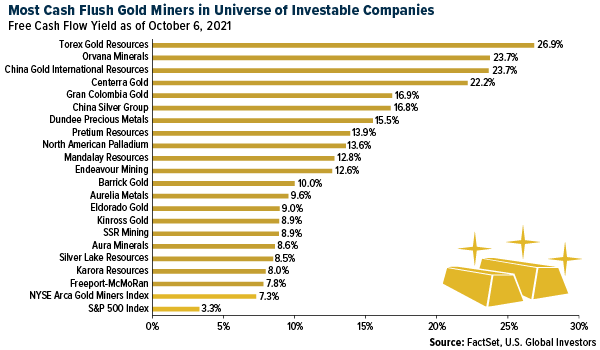 As you can see, there are quite a few companies that have very strong cash positions at a time when investor sentiment for gold miners is very low.
Again, when sentiment has been this low, returns have historically been attractive six months later. The companies above, I think, would be a good place for investors to start hunting for opportunities in anticipation of the next bull run. We invest in several of the names here at US Global Investors.
And then there's Bitcoin. The crypto is up more than 430% for the 12-month period. Inflation has certainly been a demand driver, as has this week's launch of the first US-based Bitcoin-linked ETF, the ProShares Bitcoin Strategy ETF, ticker BITO, which now holds the record for reaching $1 billion in assets in the fewest days, according to Bloomberg's Eric Balchunas.
Appropriately enough, the former recordholder was State Street's SPDR Gold Shares ETF (GLD), which made its debut way back in 2004.
Clearly BITO has found a market, but keep in mind that it does not invest in Bitcoin directly; instead, it holds Bitcoin futures contracts, which some investors may not prefer. A spot Bitcoin ETF is not available at the moment, but it probably won't take long for one or more to be issued.