END_OF_DOCUMENT_TOKEN_TO_BE_REPLACED

The idea of rising prices, and a falling US Dollar, is beaten down and oversold...
FIRST, for all you right minded wording detectives out there, you are absolutely right, writes Gary Tanashian in his Notes from the Rabbit Hole.
Inflation is not rising prices and deflation is not dropping prices. Also, deflation is not two measures of a heavily manipulated bond market (chart 1) dropping impulsively. But for the sake of argument, let's realize that Main Street does indeed call $4 regular at the pump "inflation" and every several years when a scare crops up they call dropping stocks and house prices "deflation".
Here are some pictures of an over sold 'inflation' story, which put another way, is an over bought 'deflation' story... 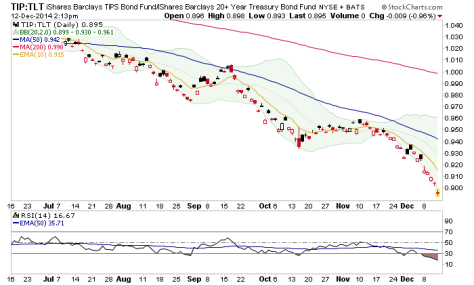 TIP vs. TLT (inflation protected vs. regular long-term Treasuries), the indicator that did indeed give us the heads up on a coming implosion of inflation expectations long ago, is burrowing southward in what looks like a Waterfall decline (the opposite of a parabolic blow off ala Silver 2011, at the height of the last inflationary blow out). 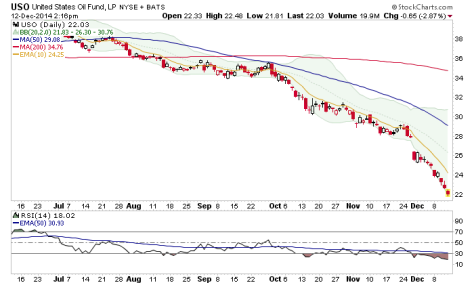 Today's headline grabber, Crude Oil (USO) is tanking big time. Pun not intended, and buy reco not intended either (yet). Still, we appear to be in extremis on the dying inflation story. Commodities of all kinds (DBC) are going to hell in a hand basket. 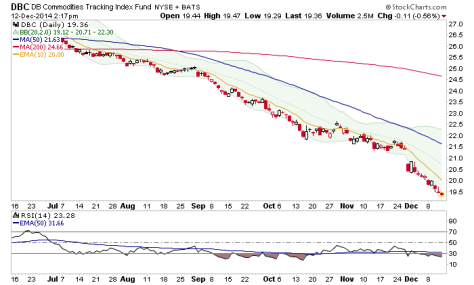 Dialing out to weekly charts, commodity currencies from Canada and Australia have kept us away from commodities because aside from the big technical breakdowns in CCI and CRB, these two have been the most bearish things I have seen over the last year. NFTRH updates them every week and every week they have flat out stunk.
Still a point of support could be upcoming for the Canada Dollar before too long. Indeed, our measured target is and has been 85 off of the massive topping pattern. The Aussie Dollar is also coming to a support point that should be watched.
Finally, there continues to be an initial inkling in play over in the precious metals, which usually spawn the first moves, amidst pervasive deflation anxiety. Both gold and silver have firmed despite the destruction in commodities and the inflation story.
With silver leading gold for the last few weeks and the Silver-Gold ratio sneaking above the 50-day moving average, the first hint is still in play. Silver is more inflation dependent than gold. Here's the daily view... 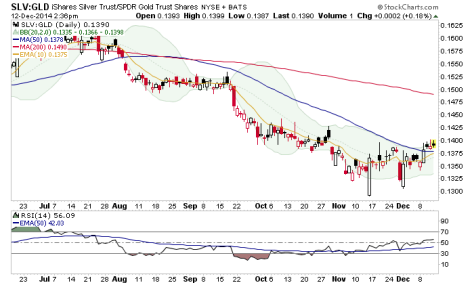 We have expected and protected against a hard decline in commodities and the inflation story in general. While the 'inflation' markets most people watch are water falling southward, we can combine coming target measurements (to support) in commodity currencies with the hint in silver vs. gold to cobble together a plan for a counter trend rally in the 'inflatables' and a counter trend correction in the US Dollar.
With the FOMC meeting this week, one wonders if they will be the next mole to pop up in our macro game of Whack-a-Mole. The last time the Yen (another anti-market, like the US Dollar) tried to bounce, out popped the BoJ. Is it the Fed's turn, with perhaps the ECB out in early 2015 after a Euro rebound?
Or maybe the trigger will just be exhaustion of the current extreme trends prior to a counter trend bounce. Regardless, 'inflation' is getting over sold.