END_OF_DOCUMENT_TOKEN_TO_BE_REPLACED

The chips are down...

As IAN FLEMING Fleming put it, once is happenstance. Twice is coincidence. Three times is enemy action, writes Tim Price on his ThePriceOfEverything blog.

Well, not to put too fine a point on it, 'Inflation is Coming' from Harris Kupperman was the first, recent, entirely credible inflation jeremiad we stumbled upon.

'Debt, Austrians and Investment Strategy' was the second – by Sir Steven Wilkinson (incidentally one of the best guests we've ever had on the State of the Markets podcast). Sir Steven's original piece is worth the reading, but here's a taster:

"I am currently unsure of whether I have manoeuvred myself into an echo chamber of a clique of like-minded value investors who can see clearly that we are in 'Fergie time' and thus close to a cataclysmic popping of the Everything Bubble (including money) or whether the current narrative (dangerously close to the end of the Everything Bubble, so man the life-boats) is now the popular view and therefore discounted? My view is coloured strongly by a moral conviction that what we have now (broken money, punishment of savers, risk free reward for insiders, etc.) is simply wrong and possibly even evil at a societal level, so what I think will happen and what I believe should happen (to purge the system of moral turpitude) are conflated at the margin. The technocratic disregard of the concerns and values of the saving classes personified in the ghastly Ms.Lagarde's most recent comments disgust me personally."

And Henry Maxey's 'Dismantling the Deflation Machine' is now the third (hat-tip, en passant, to Duncan MacInnes). Mr.Maxey's piece will feature in the Ruffer Review 2020, but here is the synopsis:

"Seeking to escape the inflation of the 1970s, policymakers have inadvertently engineered an equally powerful deflation machine. Over the past 30 years, this has been mightily reinforced by the transformation of China's economy and the impact of technology.

"Today, a financial system that is structurally intolerant of inflation faces a changing political-economy regime that makes inflation inevitable. The markets have wired themselves to the wrong inevitabilities.

"Asset and wealth managers – and their clients – need to be prepared for some of the most important changes for a generation."

There are a few problems here. One of them is that some of us have been expecting a rather messy outbreak of inflation since the first desperate Basil Fawltyish QE experiments began roughly a decade ago.

Turns out we were simply looking in the wrong place (there's been no shortage of inflation in the prices of financial assets – someone should perhaps have told the likes of Mark Carney or Mario Draghi). Another problem is the perennial boy-crying-wolf scenario.

We console ourselves there with the linguistic solace of Grant Williams in that "hasn't" is not the same as "won't". Yet another problem is that a generation of investors don't remember the 1970s. These people are dangerous enough to vote for Jeremy Corbyn.

Little do they appreciate that any remote kind of rerun of the 1970s will be more dangerous for their wealth even than Jeremy Corbyn.

There will be little comfort to come from conventional asset diversity in the event of a rather messy outbreak of inflation. As Henry Maxey points out, the traditional 60/40 Equity / Bond portfolio did not exactly pass the 1970s stagflation test with flying colours. 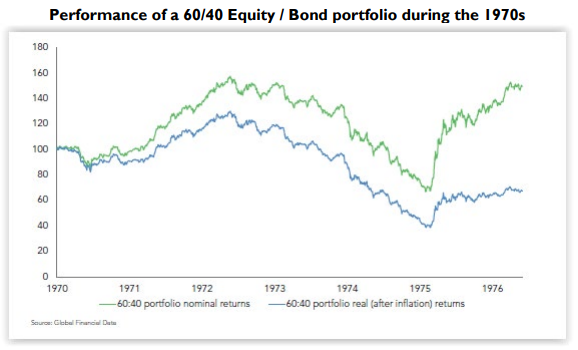 Then look at the two main asset classes in isolation. Stocks didn't fare that well. In real terms, equity investors during the stagflationary 1970s endured a drawdown of over 70%. Worse yet, they had to wait 11 years to get their money back.

Then there were bonds.. How did they fare?

Not exactly peachy. The drawdown for Gilt investors was "only" 35% – but they still had to
wait 12 years to get their money back.

Given that stock market multiples are far higher today and bond yields are already dismally lower, it is difficult to envisage today's 60/40 portfolio blithely sailing through the squalls of a rather messy outbreak of inflation.

By way of investment policy, here is our approach:

On this last point, two further questions naturally arise. 1) Got gold? 2) If you do "got gold", do you really have enough?

Of course, we may not get that (long anticipated) rather messy outbreak of inflation. How confident are you of that?