END_OF_DOCUMENT_TOKEN_TO_BE_REPLACED

Bullish on bullion as protests spread...

WHAT do Hong Kong, Chile, Ecuador and Lebanon all have in common with one another? asks Frank Holmes at US Global Investors.

The answer I happen to be looking for is that these countries, among others, are seeing mass protests at the moment.

Hong Kong's appears to be the longest-running at five straight months now. With so many of them happening around the world all at once, it raises the question: Are they related?

That depends on who you ask.

If you get your news from the "mainstream" media, you're probably being led to believe that the protests are all about income inequality, and that protesters are laying their grievances solely at the feet of the wealthy.

Although this may be part of it, the inequality narrative completely ignores the fact that the demonstrations are, at the end of the day, in response to government incompetence and failed socialist policies. If you look across the spectrum of global unrest, you'll find that the common denominator is not billionaires and other successful people but corrupt, power-hungry bureaucrats and politicians.

In Hong Kong, for instance, residents are demanding democratic reforms and greater autonomy. In Lebanon, it's corruption, a lack of accountability and bank secrecy laws that allow officials to steal tens of billions of Dollars in public funds. The protests in Chile were sparked by a hike in subway fare in Santiago, the nation's capital.

Sadly, but not surprisingly, all of this is downplayed in the media. Corruption and mismanagement don't get the blame for the unrest. Instead, it's the rich who are cast as the villains suppressing the masses.

Why? Because it reinforces some people's confirmation bias against millionaires and billionaires.
Without the inequality narrative, far-left lawmakers in the US have no other grounds to raise taxes and push for more government control and socialist policies – all in an effort to "solve" inequality.

But this is faulty thinking. What's more, it adds fuel to the anti-business, anti-wealth sentiment that's destroyed otherwise thriving economies such as Cuba, Venezuela and others.

In some cases, the bias only seems to be getting nastier. Last week, progressive presidential candidate Elizabeth Warren's website began selling $25 mugs that have "BILLIONAIRE TEARS" written in bold text on them.

"Savor a warm, slightly salty beverage of your choice in this union-made mug as you contemplate all the good a wealth tax could do," the website reads.

Such disdain for the most successful among us is a slippery slope that leads only to economic and financial stagnation, not to mention mediocrity.

Socialist policies that punish entrepreneurialism and innovation have created additional uncertainty for explorers and producers of metals and other materials that all of us depend on.

A couple of weeks ago, I was in Lima, Peru, attending the Mining & Investment Latin America Summit. I heard from a number of industry leaders that mining in South America has become more challenging in recent years.

One of the biggest reasons why is that the burden for taking care of local communities has, in many cases, fallen on the miners' shoulders. Venezuela's corrupt socialist President Nicolas Maduro continues to destabilize and finance radicalism throughout the continent using revenue from narcotics, and mining companies often end up having to pay the price.

Chilean lawmakers, for instance, are considering a new tax on mining and mineral extraction to address the country's social unrest I described earlier.

As you can imagine, this could discourage speculation in the junior mining area. Think of it this way: What if your gambling or lottery winnings were taxed at 50% or higher? I suspect there would be fewer people headed to Las Vegas or buying lotto tickets.

But Latin America isn't the only region causing uncertainty for miners. Late last month, British Columbia (BC) became the first Canadian province to pass legislation based on the United Nation's Declaration on the Rights of Indigenous Peoples, or UNDRIP. Intended to end "discrimination and conflict" and ensure "more economic justice and fairness," UNDRIP has some BC-based mining companies wondering if their rights to extract minerals on lands once inhabited by Native peoples could be undermined.

Be that as it may, I'm still extremely bullish on metals and minerals. Every year, some 140 million people are born, and each one of them will need a fresh supply of commodities for their homes, automobiles, appliances, smartphones and more. It's been estimated that each American requires an average 38,449 pounds of various minerals every year.

Also driving my bullishness right now is the likelihood that the global manufacturing purchasing manager's index (PMI) looks to have either stabilized (in advanced economies) or begun to recover (in emerging economies). As I've explained many times before, the PMI is a leading indicator of commodities demand from factories and manufacturers. 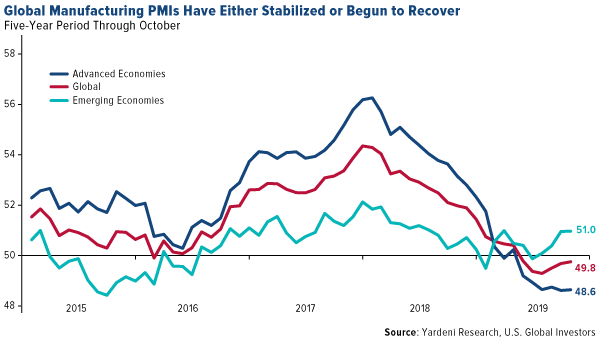 A sign that reports of China's slowdown have been overdone includes the news that sales of excavators by Chinese manufacturers hit a record high this year as hopes escalate that the government will stimulate the economy by boosting infrastructure spending.

According to Caixin Global, Chinese manufacturers sold 196,222 of the earth-moving machines, essential for large construction projects. Almost 90% of these excavators were purchased by domestic firms.

To Nancy's point, I might also add that progress in the US-China trade dispute has been constructive for commodities demand expectations, not to mention trade. This has helped spark a year-end stock rally as investors catch a case of "fear of missing out", or FOMO.

Fund managers' cash levels have dropped in November to their lowest since June 2013 on improved optimism. According to Bank of America Merrill Lynch's most recent survey of managers overseeing more than $500 billion in assets, cash levels fell from 5% in October to only 4.2% this month. That's the biggest one-month drop since Donald Trump was elected president.

Safe haven assets, including gold, US Treasury bonds and the Japanese yen, have normally receded in "risk-on" environments, and this cycle has been no exception. Gold prices have fallen around 6.3% from their six-year highs of more than $1,565 an ounce in early September.

Consequentially, investors have been taking money out of gold-backed ETFs at a rapid pace. In the week ended November 8, as much as $620.7 million was withdrawn from SPDR Gold Shares (GLD), the world's largest ETF backed by physical gold. That amount was the most for a single week since October 2016.

I see this decline as a healthy correction, and I urge investors to consider taking advantage of the discount. After all, we wait to buy certain items until Black Friday or Cyber Monday, when they go on sale and are more affordable. We should have the same buying habits with regard to gold and other assets.