END_OF_DOCUMENT_TOKEN_TO_BE_REPLACED

Gold demand in world No.2 consumer set to rise this Diwali...

Rural households make up a third of India's annual consumption of the yellow metal. So it's a relief to hear that India just had its best monsoon season in three years, with heavy rains washing away people's fears of yet another drought.

Add to that the fact that the yellow metal is now trading in the affordable $1250 to $1260 range – a sizeable discount from only a month ago – and gold jewelry sales are expected to surge as much as 60% over last year, according to the India Bullion and Jewellers Association.

That would take sales to a four-year high as we near Diwali – traditionally a time when gold-buying is considered auspicious – which would help support prices.

Following Diwali comes the important Indian wedding season. It's almost impossible to exaggerate how massive this industry is, with one India-based research firm expecting it to hit 1.6 trillion Rupees ($24 billion) by 2020.

I've shared with you before that between 35% and 40% of a typical Indian wedding's expenses is devoted to gold jewelry. If we use the higher estimate, that means close to $10 billion could be spent on gold alone.

But for spending like this to happen, a strong monsoon is needed, which farmers in many parts of India got this year.

For millennia, gold has played a key role in Indian culture, valued not only for its beauty and durability but also as financial security. That's no less true today. A 2013 survey conducted by the Federation of Indian Chambers of Commerce & Industry (FICCI) found that more than three quarters of Indians view the precious metal as a "safe investment".

The same FICCI study also found that gold is a regular line item in most Indian households' budgets, comparable to what they spend every year on medical expenses and clothing. 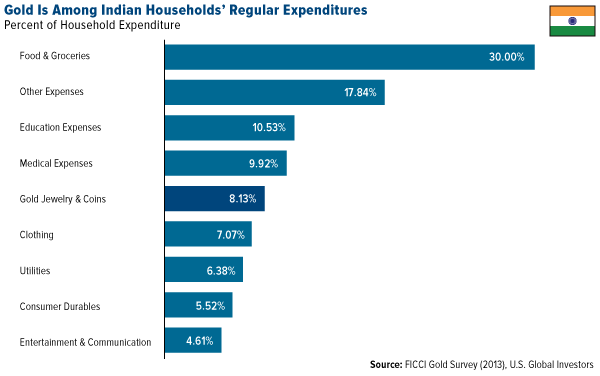 It should come as little surprise, then, that Indian households have the largest private gold holdings in the world. Standing at an estimated 23,000 tonnes, and worth close to a whopping $1 trillion, the amount surpasses the combined official gold reserves of the United States, Germany, Italy, France, China and Russia.

After logging its best first half of the year in 40 years, gold is now trading range-bound while we await the Federal Reserve's decision to raise rates in December. Most, but certainly not all, of the recent economic data seems to be pointing in this direction, with initial jobless claims at a four-decade low, voluntary quits at pre-recession levels and household income finally on the rise.

Early October was especially brutal. With markets in China, the world's largest consumer, closed in observance of Golden Week, the short sellers had free rein, driving the price down more than 3% on Tuesday alone.

Despite the weakness, inflows into gold ETFs continue to pour in, as savvy investors recognize that real, or inflation-adjusted, Treasury yields are still in negative territory. I use the 2-year yield here because it's what many currency traders look at. 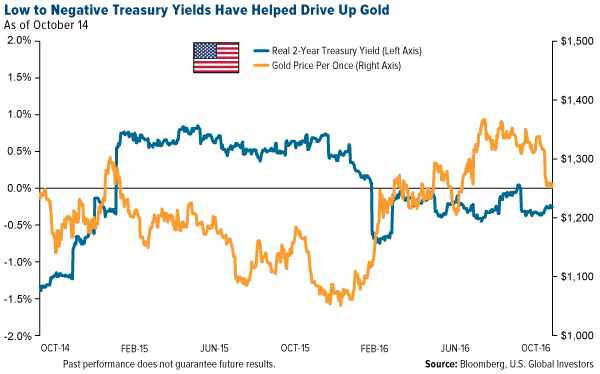 But now some analysts see gold ready to turn again, perhaps prefacing a rally that could carry the metal to an all-time high.

In a note last week, UBS said that as long as the Fed doesn't hike rates too quickly, gold should resume its upward momentum. And remember, the bull market was triggered last December after the Fed raised rates for the first time in nearly a decade. 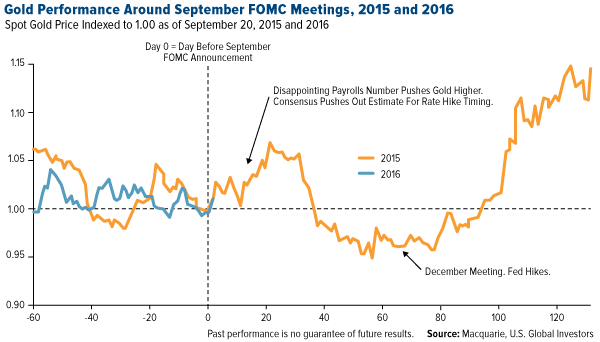 Meanwhile, London-based investment firm Incrementum suggested last week that gold could reach a new record within the next two years, supported by higher consumer prices, low to negative government bond yields and a lack of confidence in central bank policy.

"In this uncharted territory, with big monetary experiments going on, it just makes sense" to hold bullion, Ronald Stoeferle, a managing director at Incrementum, told Bloomberg.