END_OF_DOCUMENT_TOKEN_TO_BE_REPLACED

Gold imports, trading and jewelry all changing...
GOLD TRADING, importing and jewelry buying in India – the precious metal's 2nd largest consumer market – are going through a massive overhaul, led by new rules from government.
Last week saw a "pilot run" of trading on the new International Bullion Exchange, which from 1 October shall become the "Gateway for Bullion Imports into India" as mandated by new regulations passed in December.
Long billed as a potential "game changer" for the country's huge but fractured gold industry, it's expected to boost demand for bullion bars made by India's domestic refiners – an industry long suffering massive over capacity – and so hitting gold bar imports from global center Switzerland in particular.
With the National Stock Exchange (NSE) providing a key part of that new infrastructure, finance regulator the Securities and Exchange Board of India (Sebi) this month ordered the NSE to ban any of its members from trading so-called "digital gold" – a fast-growing sector where retail investors can buy and sell metal held in secure storage trading online – because it isn't a financial security for stockbrokers to offer.
Meantime, India's huge gems and jewelry industry – employing some 5 million people, and already hit by the weakest annual household demand in 2020 for a quarter of a century – is struggling to hallmark every new item of gold, plus those already in stock, under rules in force since mid-June. 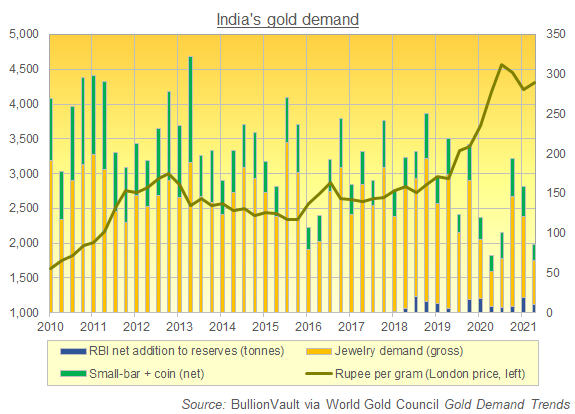 "At the current capacity of hallmarking centers," says Dinesh Jain, director of the All India Gem & Jewellery Domestic Council (GJC), "it will take around 500 days, equivalent to 18 months, to hallmark the existing stock of approximately 50 million jewelry pieces."
Monday saw many jewelers hold a strike – merely "token" action according to others in the industry, as sales are already seasonally low during the summer – arranged by 350 associations and federations brought together as the National Task Force on Hallmarking.
"Strike for what? The government is listening to every issue raised by stakeholders, the idea is uncalled for," said Bureau of Indian Standards (BIS) director-general Pramod Kumar Tiwari.
"Hallmarking scheme is turning out to be a grand success with more than 1 crore pieces of jewellery [10 million] hallmarked in a quick time. The number of registered jewellers has increased to 91,603."
But gold sales during the bumper autumn season of weddings, post-harvest investment, and then the key Diwali festival will be hampered, many jewelers say, because it is taking between five to 10 days to get a piece hallmarked through the country's 965 certifying centers.
Coming on top of the 2020 and then spring 2021 Covid Crises, such bottlenecks, says Jain at the GJC, "will eventually lead to the collapse of the industry."
Bottlenecks also threaten India's wider gold trading as a result of the centralized Bullion Exchange, according to former secretary of commerce and finance Ashok Jha.

With details of vault locations for India Bullion Exchange-traded metal still unpublished, "A single location exchange-based import mechanism could lead to disruption of supply lines," Jha told Arabian Business earlier this week.
"A policy change should not be aimed at promoting one institution but to ensure that gold is made easily available to end users."
Moreover, the exchange "should function as a two-way traffic" says Surendra Mehta of the India Bullion & Jewellers Association (IBJA), "facilitating both imports and exports."
India continues to ban gold bullion exports, as does the precious metal's No.1 consumer China.
This means that, rather than helping determine the direction of global prices, any excess of domestic supply over demand must be worked through by price cuts, and with various Indian governments trying to reduce household gold demand and its impact on the nation's current account balance since 2012, the metal has repeatedly traded at a discount to quotes in London, the global bullion market's key storage and trading hub.
A key part of New Delhi's fight to reduce gold demand has been higher import duty and sales tax on bullion, but that has only created a boom for smuggling – estimated at 300 tonnes per year against legal inflows of 700 tonnes over the last 12 months – according to the Indian Gold Policy Centre, part of the Indian Institute of Management-Ahmedabad.
Traditionally, "Lower duty leads to higher revenue collection," says the IGPC, estimating that India is losing INR 20,000 crore (US$2.7bn) in revenues by charging a total of 14% on legal purchases, down just 2 percentage points after a surprise cut in this February's Union Budget.
As for jewelry buying, and "given that India's rural economy was adversely impacted during the [spring's] severe second wave of the pandemic," says specialist consultancy Metals Focus, "a revival could boost gold demand during the all-important wedding and festive season" starting in October and running into New Year 2022.
While government levies continue trying to curb private gold imports by reducing consumer demand, the Reserve Bank of India has extended what have become regular purchases of bullion for its foreign-exchange reserves, moving into the Top 10 national holders worldwide with a stockpile of more than 705 tonnes.