END_OF_DOCUMENT_TOKEN_TO_BE_REPLACED

Annual plea in gold's No.2 consumer nation...
CUTTING India's gold bullion import duty and sales tax would reduce gold smuggling into the metal's No.2 consumer nation according to senior figures in its massive jewelry industry.
The pleas repeat what has become an annual call for lower gold bullion levies ahead of the Union Budget, due for 2021 release on 1 February.
"We urge the government to reduce the customs duty to 4% from the current 12.5%," says the All India Gem and Jewellery Domestic Council (GJC). If not, the massive profit margin offered to illegal inflows "will encourage smuggling."
Jewelry retail giant the Malabar Group also called this week for a cut to gold taxation, urging an effective gold levy rate of 7% – including import duty and GST sales tax – again "to curb large-scale gold smuggling in the country."
Legal gold imports sank by two-thirds last year from what was already a 3-year low in 2019, as high taxation, record-high prices and Covid pandemic lockdowns dented household demand and gifting of jewelry, coins and small bars.
Estimates for the flow of illegal gold into India vary, with 2014's sustained premium to London prices – caused by the government's 80:20 rule blocking new imports – seeing perhaps 200 tonnes of smuggling.
2020's pandemic shutdowns failed to halt illegal inflows however, with customs officials continuing to report regular seizures and arrests, including a ring accused of using the United Arab Emirates' consulate in the western state of Kerala, and now implicating senior local politicians, to smuggle 167 kilograms of gold – currently worth nearly $10 million – between November 2019 and June last year.
2020's weak demand for gold with 12.5% duty and 3% GST was reflected in India's domestic pricing, where wholesale bullion sank to average an $18 discount per ounce to London quotes across the year, the worst disincentive to new imports from the world's bullion storage and trading hub since the $20 discount across 2016. 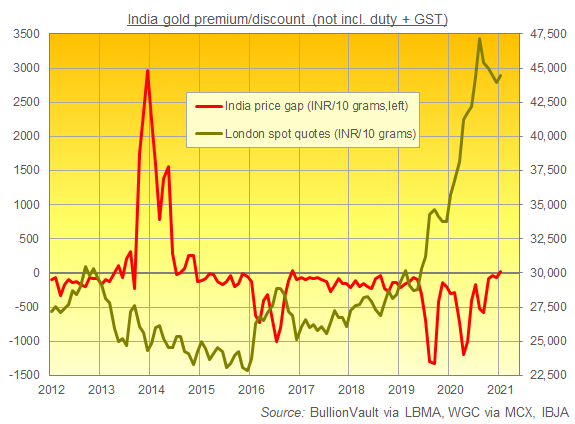 India's domestic wholesale gold price has risen to show a $1 per ounce premium so far in 2021 according to Reuters' news reports.
But figures compiled and published by the mining industry's World Gold Council say India has now traded flat or below London quotes in all but 1 of the last 74 months.
Prior to India imposing a national General Sales Tax in 2017, the industry had already warned in 2016 that adding GST sales tax on top of the then-10% import duty "would be unviable and push the trade underground."
New Year 2017 then saw industry figures call for higher GST and lower import duty both to deter smuggling and to stop 'round tripping' – where a trader exports and re-imports the same material to reclaim sales-tax illegally.
The following year brought more calls for a cut to gold taxation, as did 2019, but instead the Government raised the duty to 12.5% from 10% that July.
"I am expecting a significant reduction in import duty on gold," the Economic Times quoted one Pune-based jeweller in January 2020.
The Government instead raised its import duty on gold coins to match the 12.5% rate on bullion, the highest rate since India began deregulating and decriminalizing the private import and trading of bullion after the 1991 current-account crisis.
With India now reporting 10.5 million confirmed cases of Covid-19 with 150,000 deaths – both peaking last September – international airflights remain suspended until at least 31 January 2021.
But while lockdown may have helped thwart some gold smuggling, 23 countries remain open to flights through India's "air bubble" agreements, including the UK and also the UAE.
Meantime in the formal gold jewelry sector, and after reporting a loss for April-June – its first in nearly 2 decades – manufacturing and retail giant Titan (NSE: TITAN) said in October that its July-September sales of gold bullion fell only 2% from the same period of 2019 by value.
Gold priced in Rupees, however, cost almost 37% more from a year earlier, signalling a steep decline in sales by weight.
"Fresh uncertainty for the jewellery industry" comes from the new PMLA rules, says specialist bullion consultancy Metals Focus, noting the
Under rules introduced at the end of 2020 – "a time when demand is just recovering from the pandemic" according to Metals Focus' latest India Focus Monthly – the Prevention of Money Laundering Act will now require dealers to take and keep details of any customer trading over INR 1 million (around $13,500) in either one or more transactions paid in cash.
This move, reportedly led by India's obligations to the international Financial Action Task Force (FATF), follows the aborted 2017 attempt to impose Know Your Client rules on cash transactions above just INR 50,000 (less than $700) – something which the jewelry industry successfully lobbied to overturn.
Any non-compliance with the new rules however will see a retailer strictly monitored. "If KYC is effectively required for all cash transactions," warns Metals Focus, "it will undermine consumer purchases and ultimately weigh on jewelry demand."
Due for presentation by ruling BJP leader Narendra Modi's finance minister Nirmala Sitharaman on 1st February, the Government's 2021 budget is expected to confirm that capital-gains tax does not apply to any of the Sovereign Gold Bonds (SGBs) first launched in 2015 to try diverting some of India's massive annual household gold buying into taxpayer-backed schemes instead.
Data from the Reserve Bank of India say that over the last half-decade the SGBs have attracted investment equal to less than 31 tonnes of gold.
Gross bullion imports have totalled some 4,650 tonnes over the same period.