END_OF_DOCUMENT_TOKEN_TO_BE_REPLACED

A "SLOW-growth trap", writes Frank Holmes at US Global Investors.

That's how the Organization for Economic Cooperation and Development (OECD) described the global economy last week in its latest Global Economic Outlook. The group sees world GDP advancing only 3% in 2016, the same as last year, with a slight bump up to 3.3% in 2017.

Catherine Mann, the OECD's chief economist, urged policymakers around the world to prioritize structural reforms that "enhance market competition, innovation and dynamism," as monetary policy has been used alone as the main tool for far too long. The longer the global economy remains in this "slow-growth trap", Mann said, the harder it will become to revive market forces.

This is precisely in-line with what I, and many of my colleagues, have stressed for months now. To push the economy on a high-growth path, we need structural fiscal reforms, both here and abroad. One need only look at the global purchasing managers' index (PMI) to see that manufacturing conditions have been slowing for the past several years since the financial crisis. The PMI in May registered a 50.0, which Markit Economics describes as "lethargic" and "low gear."

US manufacturing also saw further weakness in May, with its PMI reading falling to 50.7, more than a six-year low. The Eurozone's PMI fell to 51.5, a three-month low. Meanwhile, the Caixin China General Manufacturing PMI came in at 49.2, still below the neutral 50 threshold.

It's clear that policymakers need to address slow growth with smarter fiscal policies, lower taxes and streamlined regulations. Zero and negative interest rate policies are taking their final gasp as far as what they can accomplish.

But one of the bright spots continues to be India, whose own manufacturing sector expanded for the fifth straight month in May. The country's GDP advanced an impressive 7.9% in the first quarter, following 7.3% year-over-year growth in 2015. This helps it retain its position as the world's fastest growing major economy.

Many analysts are referring to this as the "Modi effect," in honor of Prime Minister Narendra Modi, elected two years ago on promises to reinvigorate business growth by cutting red tape and increasing infrastructure spending. Modi, who is scheduled to visit Washington this week, has had limited success at this point. But to be fair, India's challenges run deep, and it will take quite a bit longer to make substantial changes to the country's notorious regulations and corruption.

Make no mistake, China's oil demand is still massive, second only to the US. But it has begun to contract in recent months, and there to offset the difference is India, who is expected to have the fastest growing demand for crude between now and 2040, according to the International Energy Agency (IEA). India's consumption stood at 4.5 million barrels a day in March, which is up considerably from an average of 4 million barrels a day in 2015.

The Asian country represented a whopping 30% of total global consumption growth in the first quarter. This makes it the world's "star performer" growth market, a role occupied until recently by China. India is now poised to overtake Japan as the second largest oil consumer in Asia, if this hasn't already happened. 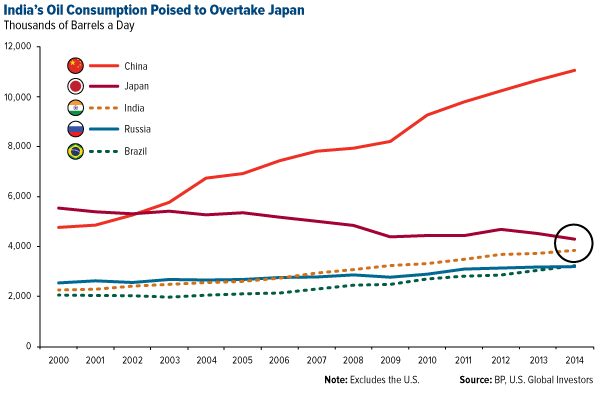 Contributing to India's oil binge are policy changes that make its economy resemble China's in the late 1990s, soon before its industrial boom. Compared to other major economies, India's per capita consumption of oil is relatively low, as ownership of automobiles and motorcycles – many Indians' preferred mode of personal transportation – is still developing, with penetration at merely 144 per 1,000 people. If we look just at passenger cars, the rate is closer to 17 per 1,000 people. (In the US, the figure is 850 per 1,000 people.) 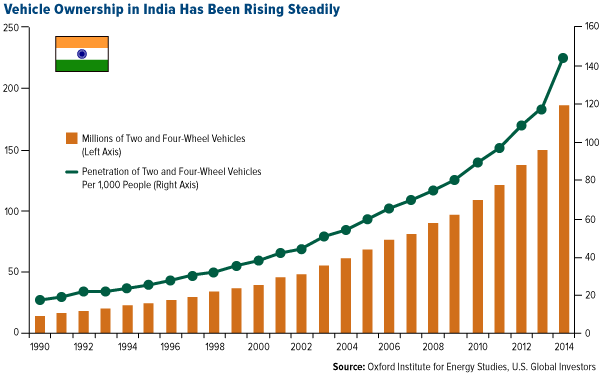 This is the exciting part, of course. A couple of months ago I shared with you a factoid from my friend Gianni Kovacevic's book "My Electrician Drives a Porsche?", that in 1979 there were only 60 privately-owned automobiles in China. Today, it's the world's largest auto market.

India's rise appears to be similarly dramatic. In the chart above, courtesy of a March report from theOxford Institute for Energy Studies, you can see that the number of vehicles driving on Indian roads doubled between 2007 and 2014, thanks not only to an exploding population but also the rise of India's "spending class," as Gianni calls it. More than 600 million Indians are under the age of 25, based on 2014 data, and many in this cohort aspire to have social mobility and the American Dream. The country is now on track to become the third largest auto market by 2020, behind China and the US, and obviously this has huge implications for oil consumption.