END_OF_DOCUMENT_TOKEN_TO_BE_REPLACED

Thank (and blame) the Index Investors...

HARD as it is to believe, there's a large group of "investors" out there who don't care about the price of what they're buying, writes Chris Mayer in Bill Bonner's Diary of a Rogue Economist.

They don't care about earnings, dividends, or any of that. They buy, no matter what.

And the result is a market full of over-loved and overvalued stocks.

Take a look at Coca-Cola's annual revenue and share price from 2012-17: 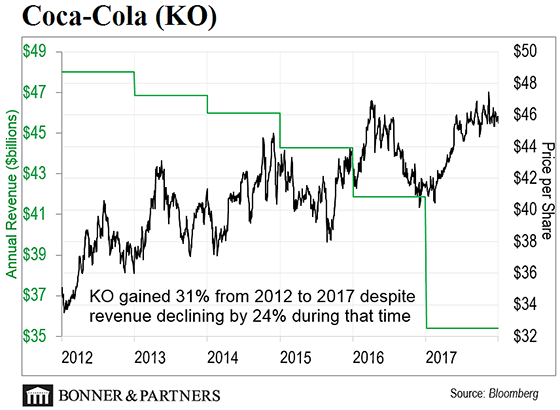 In 2017, Coca-Cola delivered another year of declining sales. And the stock was up again. So nothing has changed.

A company can't keep reporting lower and lower profits and somehow see the stock price continue to go higher and higher. Eventually, you get absurd prices.

Today, I'll show you the group of investors who are causing these distorted prices...and a little-known trick to fade or counter this trend to find value in the market.

Companies like Coca-Cola can see their share prices rise, despite falling earnings, because of a practice called indexing.

An example of indexing is when you put your money in an S&P 500 Index fund, or exchange-traded fund (ETF). These funds aim to mimic the returns of the S&P 500 by buying all the shares in the index in the exact proportion they are held in the index.

The fees are very low. And since most actively managed funds can't beat the index, index funds have become a popular option.

Popular may be an understatement. The Vanguard Group – one of the largest providers of index funds and ETFs – has $4.5 trillion under management. That's no typo. Trillion, with a "T".

The top 10 index firms report $9.2 trillion in indexed assets. That's about a third of the value of tradable shares in the S&P 500. And the inflow continues.

And those inflows are creating distortions. You have a steady buyer sending a tsunami of money into index funds as well as a limited number of big stocks.

Indexers don't care if Coca-Cola is overvalued. If it is in the index, the index fund has to buy it. Period.

Over the years, this creates odd effects on the pricing of those stocks in the index.

Few do a better job of documenting these distortions than Murray Stahl, the chief investment officer and co-founder of Horizon Kinetics, a New York-based investment firm.

Murray calls companies like Coca-Cola "revenue decliners". In March 2017, Stahl warned that Coca-Cola was overvalued. He showed that sales and earnings had fallen since 2012. And yet the stock carried a premium valuation.

"No one seems concerned that a highly caloric soft drink like Coca-Cola is losing market share to healthier alternatives," he wrote.

How to explain it?

Coca-Cola is an index favorite. And the flood of money pouring into index funds gives stocks like Coca-Cola lots and lots of automatic buyers. I think it is a leading contributor to overvaluation.

Here's a little-known secret of how S&P constructs its index: The focus is on the market cap, as indicated by the float.

The float is the number of shares outstanding less shares held by people inside the corporation.

And it underweights shares with high insider ownership, such as Berkshire Hathaway.

That's the exact opposite of what a smart investor would do.

Instead of piling into overvalued index funds, you should be attentive to the differences between companies.

It may not feel like it because the indexers have done very well blindly betting on the S&P 500. But they are taking risks that will catch up with them eventually.

In Bonner Private Portfolio, we continue to own firms that are either not in the S&P 500 or that are underweighted because of high insider ownership. That's where we're finding value.

On the flip side, there is a steady supply of sellers of stocks not favored by indexes, as money flows away from the active managers who would typically hold such stocks and toward the indexers.

The result is that you can find value in stocks not favored by the indexers. Now is a great time to be a stock picker.