END_OF_DOCUMENT_TOKEN_TO_BE_REPLACED

WITH the US Dollar taking another hit last Friday on a weaker-than-expected jobs report, gold closed up 1% for the day today, writes Frank Holmes at US Global Investors.

A Bloomberg gauge of 72 junior mining stocks, however, has lost 15% since the end of January, and the rebalance of the VanEck Vectors Junior Gold Miner ETF (GDXJ) is also having a depressing effect on many gold names.

This was a major concern among investors at the International Metal Writers Conference in Vancouver, which I presented at last week. Despite gold gaining 9% so far this year, junior gold miners have not followed through with those gains as the GDXJ is set to cut in half its exposure to the junior mining space on June 16.

Other investors aren't so pessimistic. Every year for the past 11 years, Liechtenstein-based investment firm Incrementum has issued its closely-read "In Gold We Trust" report. The 2017 edition, released last Thursday, raises a number of interesting observations that add some shine to gold's investment case.

For one, its analysts firmly believe that gold's price turnaround last year "marked the end of the cyclical bear market," adding that "the rally in the precious metals sector has probably only just begun."

To illustrate this, the group tracked the performance of every gold stock bull market going back to 1942, using the Barrons Gold Mining Index. The bull market that began last year, highlighted in red below, does indeed look as if it has much more room to run. 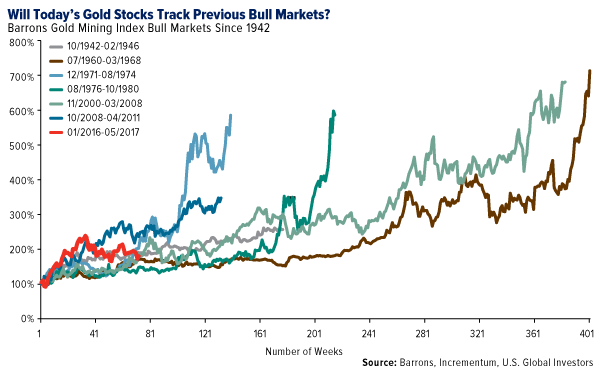 Among the reasons why "prudent investors" should consider accumulating gold and gold stocks now, according to Incrementum, are excessive global debt, the "gradual reduction of the US Dollar's importance as a global reserve currency" and what the group sees as a high probability that the US is close to entering a recession.

Interestingly, the investment firm shows that nearly every US recession, going back 100 years, was preceded by an increase in interest rates.

"The historical evidence is overwhelming," Incrementum writes. "In the past 100 years, 16 out of 19 rate hike cycles were followed by recessions. Only three cases turned out to be exceptions to the rule" – one in the 1960s, one in the early 80s, the last in the mid-90s.

The US, of course, is currently at the start of a new cycle, though the ho-hum jobs report for May – 138,000 jobs added, versus expectations for 185,000 – casts doubt on a rate hike this month. Nevertheless, Incrementum's research makes a compelling case that a recession could be imminent, making gold even more attractive as a store of value.

As for gold stocks, Incrementum favors "conservatively managed companies which are not merely pursuing an agenda of growth at any price, but are instead prioritizing shareholder interest."

This is an apt description of the kinds of gold companies we prefer – frugal, small- to mid-cap names.