END_OF_DOCUMENT_TOKEN_TO_BE_REPLACED

Now some people don't want container companies to profit from them.

In January 2020, a little-known rule went into effect that today regulates the kind of fuel maritime shipping vessels are allowed to use. Conceived of by the United Nations' International Maritime Organization (IMO), the rule, known as IMO 2020, caps the amount of sulfur in carriers' fuel at 0.5%, dramatically below the previous limit of 3.5%.

Although not considered a direct "greenhouse gas" like carbon dioxide and methane, sulfur can contribute to the formation of aerosols, which are believed to affect the earth's climate.

(As you might remember, the US effectively banned the use of chlorofluorocarbon (CDC) aerosol cans back in 1978 out of concern for the ozone.)

Under IMO 2020, vessels are permitted to use dirtier bunker fuel only so long as they have "scrubbers" installed, but these exhaust gas cleaning systems aren't cheap. Depending on the ship's age, they can cost anywhere between $2 million and $6 million per vessel.

That price tag doesn't factor in the opportunity cost of having a vessel out of service while the scrubber is being installed, not to mention the ongoing maintenance and hassle of disposing of the waste chemicals, which ultimately end up in a landfill anyway. 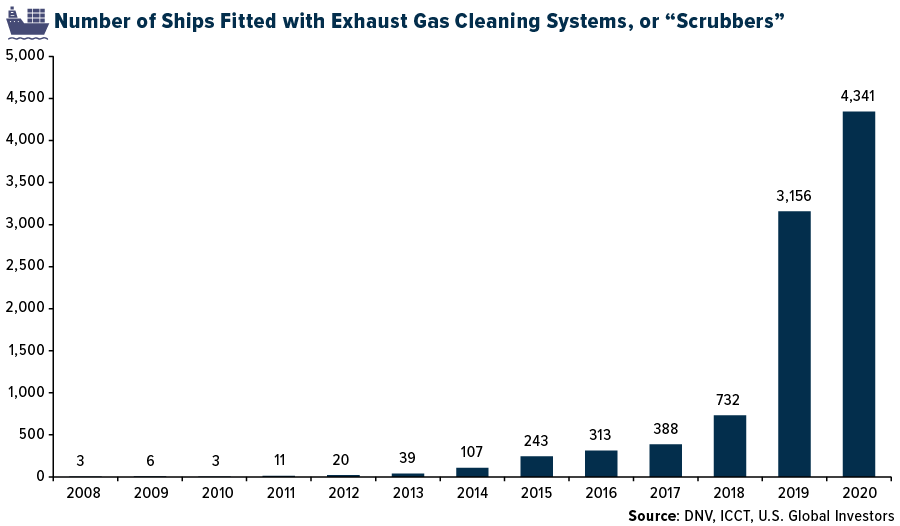 Nevertheless, many cargo shipping companies are opting for the scrubbers to avoid having to buy the pricier 0.5% stuff. According to the US Energy Information Administration (EIA), there's currently a $20-per-barrel differential between very low sulfur fuel oil (VLSFO) and high sulfur fuel oil (HSFO).

That's a not-insignificant amount when you consider that a typical Panamax-class vessel can hold up to 2 million gallons of fuel.

My reason for sharing this with you is that, as is often the case, policymakers' intentions may be good, but there are always unintended consequences – including additional costs that get passed on to customers and eventually consumers.

I believe IMO 2020 has contributed to shipping rates that have remained elevated for over a year now, the other contributors being the pandemic, country lockdowns, consumers' increased demand for goods and the ongoing semiconductor chip shortage. 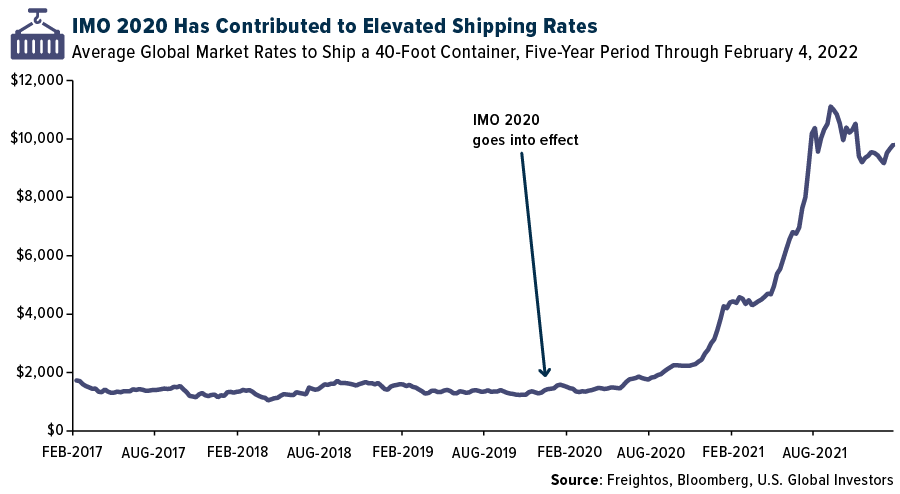 As I've said before, there's no free lunch on the periodic table. Cutting out carbon, sulfur and other potentially harmful elements is highly inflationary, and unfortunately it's everyday families and small businesses that end up paying the price.

Just ask European households, which are facing record-high energy prices. Consumers in Poland right now are reportedly being told that their exorbitant electricity bills are the result of the European Union's draconian climate policies.

And this could just be the beginning. Last year saw the fewest oil and gas discoveries in 75 years as investment has dried up, according to energy research firm Rystad Energy. Chevron CEO Mike Wirth believes $100-per-barrel oil could be right around the corner.

Interestingly, Germany's insistence on closing its nuclear power plants – which have provided the country with clean, carbon-free energy for decades – has made the country even more reliant on natural gas, a fossil fuel, imported from Russia. Putin, a former KGB agent, need not fire a single shot in his feud with the West; his financing of foreign non-governmental organizations (NGOs) that focus on climate policy is an effective enough tool in sowing division and instability.

I'm not against the energy transition, but I worry it's being undertaken without first bringing adequate technologies online to replace traditional fossil fuels. In many cases, climate laws and policies are written and enacted by officials, often unelected officials, who have little understanding of science and engineering.

It's not like we didn't anticipate higher shipping rates as a result of IMO 2020. Before the rule went into effect, analysts at Wood Mackenzie predicted that rates would increase as "the marine sector uses more costly fuels, which has wide reaching consequences across the global economy. The impact could be felt from mid-2019 onwards and last for a few years, as the refining and shipping sectors adapt."

Due to higher rates, the global container shipping industry had its best quarter ever in the final three months of 2021, with massive gains recorded by industry leaders Maersk, Hapag-Lloyd, Evergreen, COSCO and others. Below you can see Taiwanese carrier Evergreen's 2021 operating revenues compared to the two previous years.Evergreen Marine Corp. Quarterly Operating Revenues: 2019 – 2021 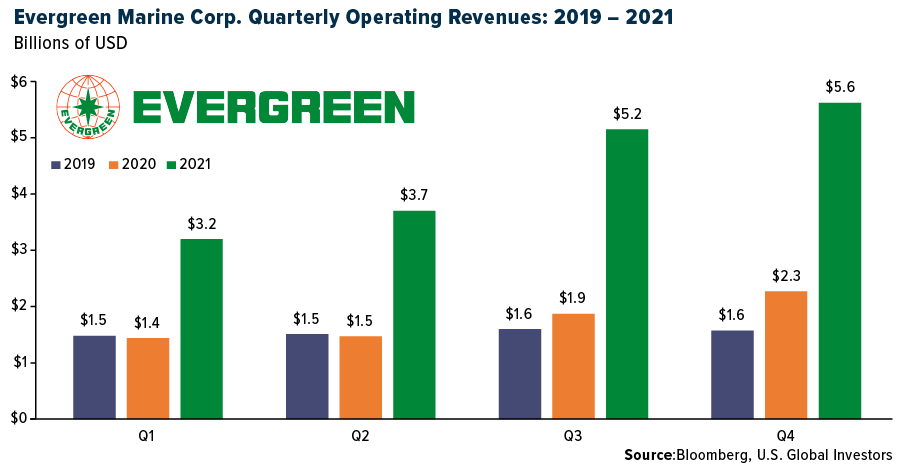 For the full year, the group is estimated to have reached a combined $150 billion in net income, an unprecedented amount.

Amazingly, some business groups, activists and lawmakers are now taking aim at shipping companies' profits, accusing them of charging "abusively high fees." So in essence, the same people who helped create the conditions for higher rates oppose the idea of container companies profiting from those higher rates.

Their opposition looks even more misplaced when you find out what carriers are doing with those profits. As I shared with you last month, many of them are rewarding not just their executives but also their rank-and-file workers, with some employees seeing a year-end bonus that was 30 times their monthly salary.

Shouldn't that be a thing to be celebrated?