END_OF_DOCUMENT_TOKEN_TO_BE_REPLACED

Despite declining US deficits, foreigners aren't buying enough bonds...
The BASIC imbalance driving the US economy is the government deficit, writes Bud Conrad, chief economist at Casey Research.
That deficit spun out of control as a result of the Credit Crisis of 2008/9. But the sequester, improving tax base, lower interest rate, and elimination of stimulus spending have caused the big government deficit, while still extreme, to drop to half its previously nosebleed levels. 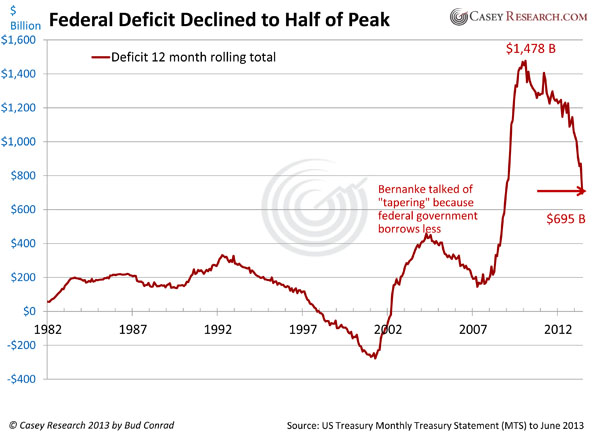 Even so, the US deficits remain well out of proportion for a sustainable future. Projections for future government expenditures, including those related to the masses of retiring baby boomers, are on track to increase exponentially. Especially given that the deficits are actually much worse than generally discussed. Honest accounting would include the growing liabilities for retirees in the current accruals, resulting in deficits running closer to $5 trillion per year.
Foreigners recycling their trade surpluses have been an important source of purchases for US government debt. As you can see from the chart of long-term securities purchases by foreigners, that buying collapsed during the crisis. And, interestingly, it has recently fallen sharply again. 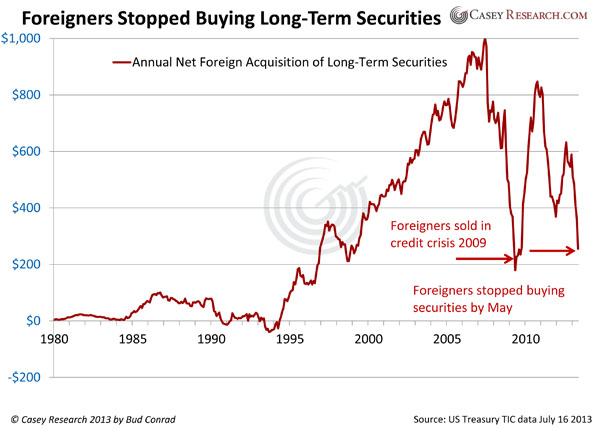 Offsetting the reduction in purchases of US debt by foreigners, the Federal Reserve has stepped in with multiple quantitative easings (QE), buying government securities itself in order to add liquidity and drive interest rates down.
The shift into an accommodative policy is easy to see in the big picture of the holdings of Treasuries at the Fed. 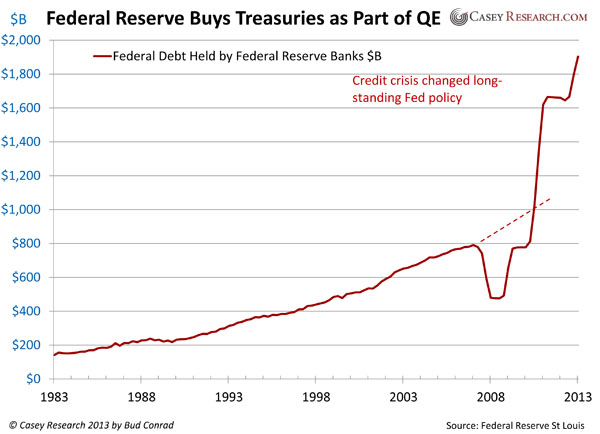 Simply put, the loss of foreign enthusiasm for US government debt would normally be a red flag for our economy. This time around, the slack is being papered over by the Fed, which is creating money out of thin air with QE in order to buy what is, in essence, most of the new debt being issued by the federal government.
By filling the gap left by exiting foreigners, the Fed has been able to sustain low interest rates – for the time being. 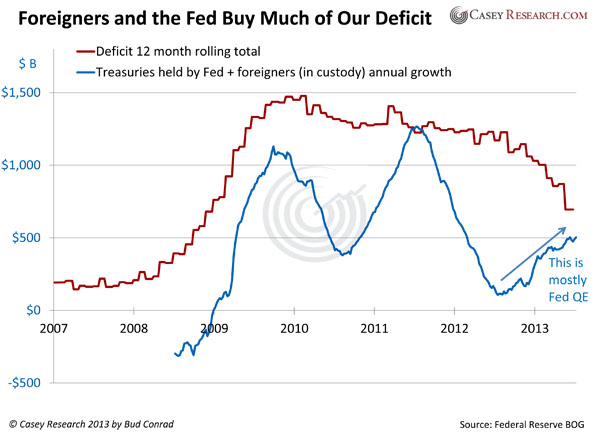 As the American public doesn't save much, and because foreigners are stepping away from US government debt, the Fed is left as the buyer of last resort and will have to keep up its QE.
Among a number of problems, the money creation required for the Fed to serve as the government's lender of last resort can be very inflationary once it ultimately bleeds into the economy. For now, most of the new money has been bottled up on the balance sheet of the Fed. With low rates, that is manageable. But if rates rise, as they eventually must in the face of rising inflation and a loss in confidence in the Dollar, the interest the Fed pays on deposits rises as well, putting the viability of the institution at risk.
In addition, as rising rates increase the cost of servicing the government's many debts, federal deficits will also rise. And that has the very real potential to create the equivalent of an economic death cycle as foreigners, and pretty much anyone other than the Fed, rush to the exits on US government paper, causing interest rates to rise further.
While it is impossible to say with any certainty when the US government bond bubble, the largest in history, will burst, the recent up-moves in interest rates should serve as a clear warning shot. From the charts, it looks like the foreigners have taken notice.
For those interested in learning more about the coming end to the bond bubble, the latest edition of The Casey Report contains an up-to-date report and in-depth analysis on inflation, deficits and interest rates. Your subscription comes with a 100% money-back guarantee... so you have nothing to lose by giving it a try.