END_OF_DOCUMENT_TOKEN_TO_BE_REPLACED

Did you know? There's an international accounting standard for hyperinflation...
HYPERINFLATION – the word is tossed around, and many have an opinion about it, without having any real clear idea of what it means, writes Nathan Lewis on his New World Economics blog.
We all probably have some mental picture of the "billion Dollar banknote" or "price of coffee rises as you drink it" kind of hyperinflation, as happened in Germany especially in 1923.
But, this is somewhat rare. Not as rare as you might think, but it constitutes only a small portion of those events which I think are legitimately labeled "hyperinflation".
This table, the Hanke-Krus Hyperinflation Table, lists fifty-three of the most intense hyperinflations in recent history.
The least intense hyperinflation listed is a 55.5% increase in "prices" in a month in Kazakhstan in 1993, which works out to a doubling of prices every 47.8 days. However, this table leaves out many hundreds of events which are legitimately called "hyperinflation" in my opinion, and in the opinion of those who lived through them, and historians.
You see what I mean when I say that hyperinflation is "not as rare as you might think". Contrast Wikipedia on various hyperinflations too. Extreme hyperinflations like these tend to grab people's attention. However, I would suggest that they are actually less relevant than some milder cases.
Let's say you start with the price of a cup of coffee at $1. After a few years, the price of the cup of coffee is $100. I say that most of whatever is going to happen has already happened by that point. The "purchasing power" of $1 has already declined by 99%. There actually isn't much difference between a cup of coffee that goes from $1 to $100, and from when it then goes to $1000, or $1 million, $1 billion or $1 trillion. It's just the last bit from 99% to 99.999999% loss of "purchasing power." I call it the "final clownshow". Many countries never get there.
There is no particular dividing line between "inflation" as the US experienced it in the 1970s, and "hyperinflation". It is somewhat arbitrary. However, there is a point at which certain things begin to change, which I think is a legitimate point at which to add the "hyper-" prefix.
I'm using the word "inflation" here too as it is popularly conceived. These terms don't have clear definitions. Although I can apply clear definitions to them, and have in the past (in my book Gold: the Once and Future Money), nobody else shares my definitions. I now think it is best to avoid them altogether, or, to use them as others might understand them, in a vague and casual way.
The International Accounting Standards Board, which is the general rule-maker for accounting worldwide, has a specific definition of "hyperinflation". IAS 29 says that hyperinflationary accounting standards apply when "the cumulative inflation rate over three years is approaching, or exceeds, 100%." By "inflation rate" they basically mean the official Consumer Price Index. FASB, the standards-making body for US accounting, has the same definition as the IAS.
Thus, for them, "hyperinflation" is a rise in the CPI of 100% or more over a period of three years. It works out to 26% per year compounded, or 2.0% per month.
Two percent a month. Which probably doesn't seem very "hyper-." It certainly doesn't make the price of your coffee go up in the thirty minutes it takes to drink it. But the IASB is not just throwing out these definitions on a whim. This is based on real-life experience, of many corporations that have had to deal with accounting in situations of hyperinflation.
For example, in the 1980s, essentially all of Latin America – pretty much everything south of Texas – experienced hyperinflation. The Latin American subsidiaries of Coca-Cola, for example, had to ask for guidelines on how to do their accounting in this environment. So, this admittedly arbitrary definition is nevertheless based on an enormous amount of real-life experience.
When you get annual CPI rises on the order of 26% per year, over a period of three years – the minimal requirements of "hyperinflation" according to IAS 29 – certain essential elements of the modern market economy start to break. For example, accounting breaks. And other things break, like any sort of long-term contracts or agreements.
During hyperinflation, wage agreements and contracts for services have to be renegotiated several times a year. Public and private pensions, annuities, life insurance, and of course any kind of long-term bonds or lending becomes worth a lot less, or even worthless. The tax system might also break, either taxing at much too high a rate (for example, on corporations who seem to have enormous "profits" because their cost-of-goods-sold is based on FIFO accounting, or capital gains based on years-ago purchase prices), or too low (for example, on regular income, which is paid on April 15 for the entire previous year, in a dramatically devalued currency with very little current value).
Actually, the IASB described hyperinflation in these terms:
In other words, things start to break. Not only the things listed here start to break. These are just a few of a great many elements of the money economy that stop functioning properly when the money goes bad.
One reason I called the 1970s experience in the United States "inflation" rather than "hyperinflation" is that these things didn't break. Interest rates rose to mid-teens levels, but the financial system didn't dry up and blow away as it did in Latin America. The US income tax system, which was not automatically indexed to inflation in those days, was on its way to choking off the economy altogether as the middle class rose into tax brackets intended for the very wealthy. But, it didn't quite get there.
Things almost broke, in the 1979-1980 time, but that's when Paul Volcker panicked and did whatever he had to do to avoid that outcome.
Here's what hyperinflation looked like in Mexico during the 1980s: 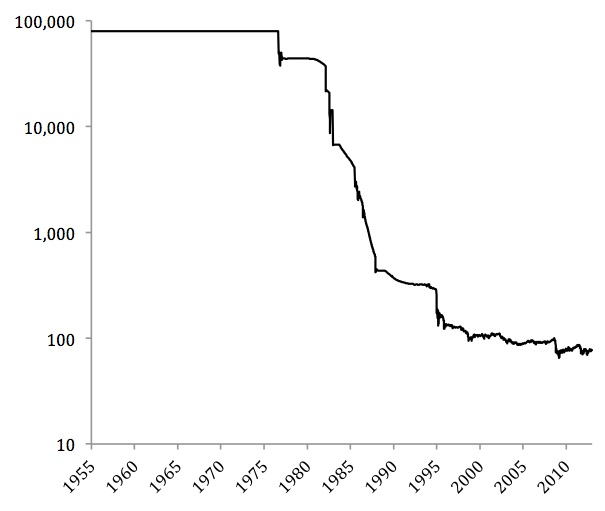 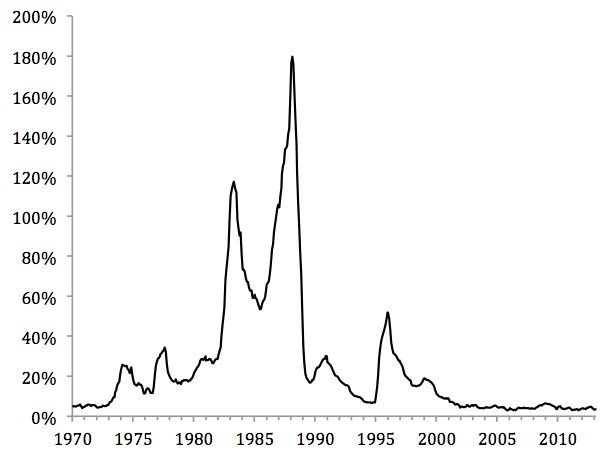 The official CPI rose by an annual rate of between 55% and 180% during that time period, typical throughout Latin America during this era. This fits the IASB definition of "hyperinflation", and indeed that's what Mexicans called it at the time.
However, even the peak 180% per year rise works out to 8.9% per month, which maybe doesn't strike people as very "hyper". Nevertheless, if the value of your pensions, savings, bonds, etc. fell by a factor of 100:1 over six years, you would be a little peeved.
If your $100 pension was then worth only $1 it wouldn't really matter that much if it then went from $1 to $0.10 or $0.01, and at what rate of speed that might happen. That's why I say most of the action happens in the first 100:1, and the rest is just the clownshow at the end. In the case of Mexico, it never got there. In 1988, the value of the Peso was stabilized against the Dollar and the hyperinflation ended, although the Peso did have another incident in 1995.
The worst thing about the clownshow at the end is not really the "rate of inflation," which is not actually so relevant. It is really the time lost. By this point, the economy is reduced to subsistence. Things are very difficult. People are just trying to get enough to eat. This can go on for a few months, or it can go on for several years. It's the time – the time spent in this period of despair and bare subsistence – that is the real "cost" of hyperinflation at that point.
These kinds of IASB-defined hyperinflations don't even show up in the Hanke-Krus table or Wikipedia's list of hyperinflation events, although they are certainly hyper-destructive. There are also many examples of currencies, like the Turkish Lira, which decline by a 30%-50% rate every year, fitting the IASB definition of hyperinflation, for perhaps decades at a stretch.
There's more. Japan had a hyperinflation in the 1945-1950 period, when the value of the Yen went from about 4 per US Dollar to 350. This again was about a 100:1 devaluation, much like that of Mexico, in about the same time period. It doesn't show up in these lists. There are also some other events.
The French Franc was worth 40 per Dollar in 1939, and 350 in 1949. This was not quite hyper, but it was still a 10:1 devaluation over a period of ten years. At 26% per year, it is right on the borderline of the IASB definition of "hyperinflation". (Actually, most of this appears to have been after 1945, because during the German occupation, the value of the Franc was fixed at 20 per Mark, and the Mark was worth, in prewar terms, about 2 per Dollar. This would compress the French hyperinflation into the 1945-1950 period, or 10:1 in only five years, or 58% per year.)
France also had about a 5:1 devaluation during and soon after WWI, not quite hyper but quite significant nonetheless.
The Italian Lira was 20 per Dollar in 1941, and 625 in 1950, a 30:1 devaluation in eight years (53% per year). The US Dollar was meanwhile worth $35 per ounce. of gold in both 1939 and 1950, roughly speaking. Italians had other things to worry about besides the value of their money; it wasn't the only thing that was destroyed in the war years. But, nevertheless, it was a hyperinflation event that generally isn't remembered by historians. And Germany also had another hyperinflation after WWII, again in the 1945-1950 period.
What I find is that, basically, all the countries in the world have experienced some sort of hyperinflation in the last 100 years. All of them! The exceptions are basically the anglo-speaking countries: Britain, the US, Canada, Australia and New Zealand. That's one reason that understanding and experience of hyperinflation is rather poor in the English-speaking world, but rather familiar in the Spanish-speaking world. We think it doesn't happen often because the anglo-speaking countries – just five out of the 150 or so countries in the world – haven't had it in the last 200 years. (Actually, there was hyperinflation in the Confederacy during the Civil War.) But, in the rest of the world, it has been drearily familiar.
The reason that there hasn't been hyperinflation in the anglophone world is because of the tradition of Hard Money embraced by the British and the American colonies that became the United States. This is why Britain, and then the United States, became the leaders of the world monetary systems of those times, with the premier international "reserve" currencies.
But, as we can see, this tradition has been getting rather soft recently. The anglophone world is starting to look a lot like ...the rest of the world in these matters. Maybe the US, Britain etc. are even leading things in this regard, while the Chinese and others say "stop!" Even Brazil, a serial hyperinflationist, is saying stop (with Chinese prompting).