END_OF_DOCUMENT_TOKEN_TO_BE_REPLACED

"Prolonged inflation (and, especially hyperinflation) cannot continue without increases in the monetary base..."

"A COUNTRY'S LONG-RUN INFLATION is caused primarily, or perhaps exclusively, by increases in its own monetary base," wrote Richard G.Anderson – a vice-president and senior economist at the Federal Reserve Bank of St.Louis – in a 2006 paper.

Which would mean America is about to get hit by a hurricane of money-blown inflation in the cost of living. 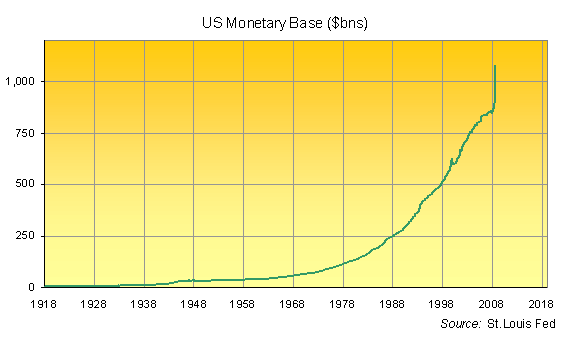 Base money, the economists tell us, means cash – notes and coins only – held outside of the central bank and outside government.

It doesn't include any measure of credit, debt or near-money items (such as commercial bonds or letters of credit). The monetary base is simply the sum total of notes and coins available in the economy. That's why it's also known as "high-powered money"...the source of what then becomes credit, debt and near-money promises when it's lent, re-lent and re-lent again by the banks.

As you can see, the steady growth in the US monetary base – averaging 6% per year since the end of the First World War – just morphed into an unprecedented jump. The quantity of base money in the US economy – meaning the actual volume of Uncle Sam's official cash notes and coins held in private hands – swelled by 25% during October.

And what does that mean?

"Prolonged inflation (and, especially hyperinflation) cannot continue without increases in the monetary base," continued Dr. Anderson – who's made something of a specialism of studying base money – in that 2006 research paper. Whereas "sharp reductions in inflation such as occurred in the United States during 1979-1980 typically are accompanied by, and likely require, sharp reductions in the monetary base."

There seems little chance, however, of a "sharp reduction" in the amount of money flowing round America right now. Not with the Federal Reserve itself pumping credit into America's banks, brokers and dealers. 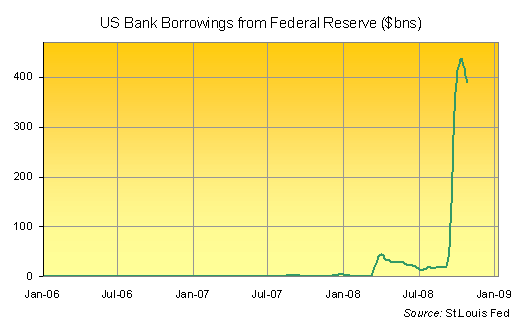 By the middle of last month, that outstanding debt stood above $400 billion, thanks to two developments

Please Note: The Fed's new and fast-growing loans to the money markets – the "Term auction credit" – doesn't show in the Fed debt figures charted above. So that's another $750 billion you can add to the pile for the Oct.-to-Dec. period.

The upshot? "I am worried about the deflation risk," says Stephen King, head economist at HSBC bank in London. "Deflation and stag-deflation will, in six months, become the main concern of policy authorities," agrees Nouriel Roubini, the media's credit-crunch darling, from the Stern Business School in New York.

All in all, "if inflation expectations were to decline sharply," says Frederic Mishkin – a former Fed policy maker and now a professor at Columbia University – "that would greatly increase the risk of deflation."

Confused? You should be. Deflation as properly defined means a shrinking money supply. Inflation is its opposite. The one tends to create falling prices (and thus encourage bankruptcy and job losses) while the other is always and everywhere followed by a rise in the cost of living (but without stronger business necessarily hiring new staff).

So place your bets now. Because whether you're a gambler or not, the Fed's massive monetary inflation – both in loans to banks and brokers, as well as in notes and coins – is going to force your hand.