END_OF_DOCUMENT_TOKEN_TO_BE_REPLACED

IT'S NOW about 2 months since the gold stock sector, as represented by the HUI index, topped out, writes Gary Tanashian in his Notes from the Rabbit Hole.

The ensuing correction has been a whip-saw affair of ups and downs, but smoothing that volatility out we find an ongoing correction in time and price that has not been too difficult to manage.

Some would call the pattern a "complex head and shoulders" (TA-speak for a freakish pattern with too many shoulders). It held a key lower high on the recent bounce to the daily chart's simple 50-day moving average (blue line). The neckline has been tested (and held) twice since it was created in September and the negative Relative Strength Index divergence that began last summer has been guiding Huey downward. 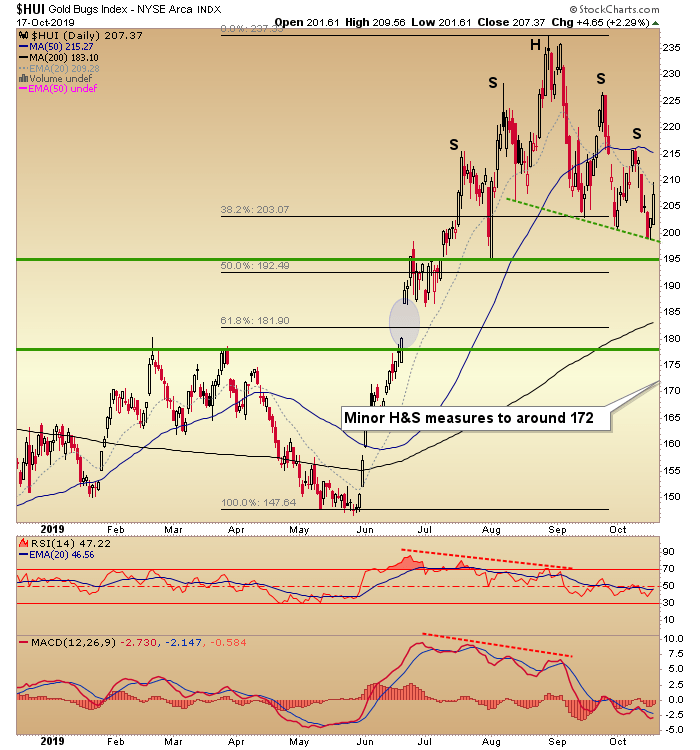 It's all normal and by the chart above you can see the targets, with a lot of technical traffic pointing to the 170s-180s for the correction's ultimate goal, which is to wash out the excess.

And excess there sure was, as we noted well ahead of time in NFTRH using this chart showing how far HUI got ahead of what I consider the most important macro fundamental indicator for the sector, gold vs. stocks and in particular gold vs. the US S&P 500. 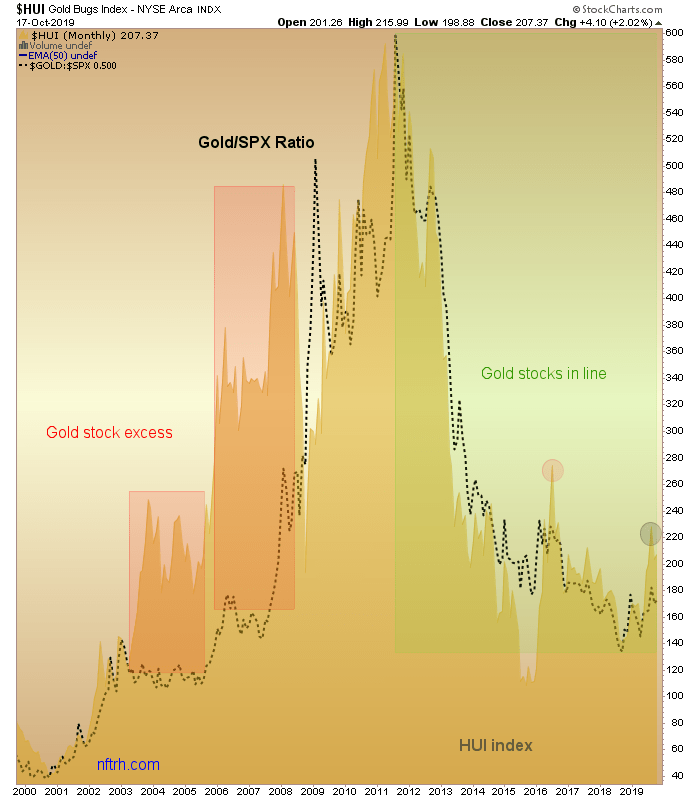 But a correction is not to be feared. In the gold mining stock sector especially, it is to be anticipated, worked with, and even appreciated as the furious momentum gets addressed and is slowly turned toward a dull despair after weeks and months of grind.

The chart above makes the point that HUI got as far ahead of itself (with respect to gold/SPX) as it did at the fatal 2016 top (red dot).

Yes it did that, but I don't expect this situation to prove a killer again. Not in the least.

Below, we can add another support marker to the TA traffic as the monthly Exponential Moving Average 20 (now at 173) has flattened out and is starting to turn up. It was a key limiter in the preceding bear market as well as during the post-2016 consolidation/correction. 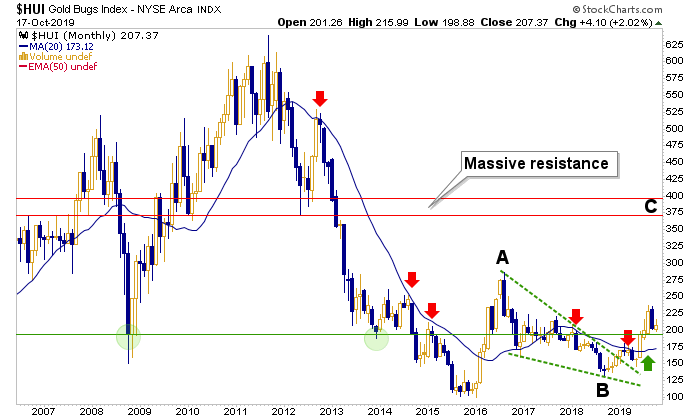 So what lays ahead?

On the bigger picture the best target for this rally that I am willing to put out there (until the macro shows its cards) is in the upper 300s, which even as an upward A-B-C bear market correction would be about a 100% increase in the index from the current shorter-term downward correction's objectives. And for many of the miners and explorers we track and update each week the gains would be much higher (in some cases they already were on the rally leg that began in May).

If we move into an inflationary phase, the US Dollar could weaken substantially. In NFTRH we are currently using the 2003-2008 playbook as a 2020-forward guide due to factors beyond the scope of this article.

In that historical time frame the HUI index rose some 250% before its bloated over-valuation was rightly addressed in H2 2008. So the good news is that gold stocks can go a long way as valuations bloat and fundamentals degrade.

And the fundamentals did degrade into that justified 2008 top. If the view is correct that rising long-term yields, a steepening yield curve and cyclical inflation issues are going to bubble to the surface of US and global markets in 2020, then a strong rise would be very doable.

But as I've harped upon repeatedly, gold stocks would then be just another passenger on the inflation train. If it's a runaway train, beaten down resource and commodity producers and regions will participate. The inflation/reflation trade would fan out and as gold underperforms cyclical commodities the investment case in the miners would weaken.

If on the other hand the US Dollar and Japanese Yen strengthen again, along with long-term Treasury bonds and risk goes off and deflation regains its footing, the gold stock fundamental backdrop would remain excellent as was the case last summer. If a chronic deflationary backdrop were to gain the upper hand...then we'd talk about a longer-term gold stock bull.

The bottom line is that while a majority of gold bugs also seem to be inflation bugs, if a global inflation/reflation trade comes about the gold miners are likely to participate and spit out good profits. But at some point players should tune out the cheer leading sure to come in the tradition of the 2003-2008 phase, that pumps unsuspecting and less experienced players with hair-brained theory like last decade's "oil is going up, driving inflation up, driving gold up...buy gold stocks!"

That stuff actually was promoted and bought in and around 2007. Never mind that oil is a prime cost driver of gold mining operations. Why let reality get in the way of a good story?

Let's also keep in mind that some of the best gains for gold mining stocks can come not as the fundamentals are at their best, but as they degrade. So bring it on, inflation or deflation, but have the proper game plan for whichever backdrop plays out.