END_OF_DOCUMENT_TOKEN_TO_BE_REPLACED

Australian house prices are more severely and seriously unaffordable than the US or even UK...

Median house prices have fallen over 15% in the United States in the last year, according to the National Association of Realtors. The median price of $175,400 is obviously starting to clear some of the inventory over-hang. If prices fall even more, you can expect more buyers to come in off the sidelines – even if it does take a while – and head back into the market.

The alternative is to keep those new buyers out of the market by propping up prices through various government-backed lending initiatives. If you want to make homes more affordable, you should let home prices adjust lower, to a level that reflects tighter credit. How hard is it to figure that out?

And would falling house prices be such a bad thing? Well, it is if you own a house and have a large mortgage on it. But let's consider a new study on global housing affordability by Performance Urban Planning. The report concluded that Australia has the most unaffordable housing of all the nations surveyed. Not only that, but according to the report, Australia doesn't even have a single urban area in which housing is merely "moderately unaffordable".

Now before Aussie readers write in defending the honor of Australia's housing market, let's be clear what the survey's designers consider unaffordable. They use a ratio of Median House Price to Median Household income, and:

Australia sports a ratio of 6.3, which is both "Severely Unaffordable" and "Seriously Daloob" in anyone's opinion.

New Zealand comes next at 5.7, followed by Ireland at 5.4 and the United Kingdom at 5.3. Owing to its large number of metropolitan areas in which there is a wide variety of median prices and incomes, the United States nationwide is priced at just 3.2 times average income.

But pockets of vastly over-inflated real estate remain...and will do for a long while yet, even at current rates of devaluation. Whereas part of the problem in those other countries is that national median incomes and house prices are derived from just a small number of densely populated urban areas. It's a pretty common occurrence in America to pack up your car, change states, and change jobs. You trade lower wages for a lower cost of living. That may be harder to do in more homogenous labor and housing markets, like, say, Australia.

So is today's ratio any higher than it was historically? You bet it is!

According to the study, "In recent decades, the Median Multiple has been remarkably similar among the nations surveyed, with median house prices being generally 3.0 or less times median household incomes.

There are other ways to measure affordability, of course. But it really comes down to the mortgage payment. Looking at house prices in terms of household earnings and income, then, is the method that makes the most sense to us. And by that measure, Australia has some of the most expensive housing in the world.

And eight of the top twenty "Severely Unaffordable" markets are in Australia, according to the survey... 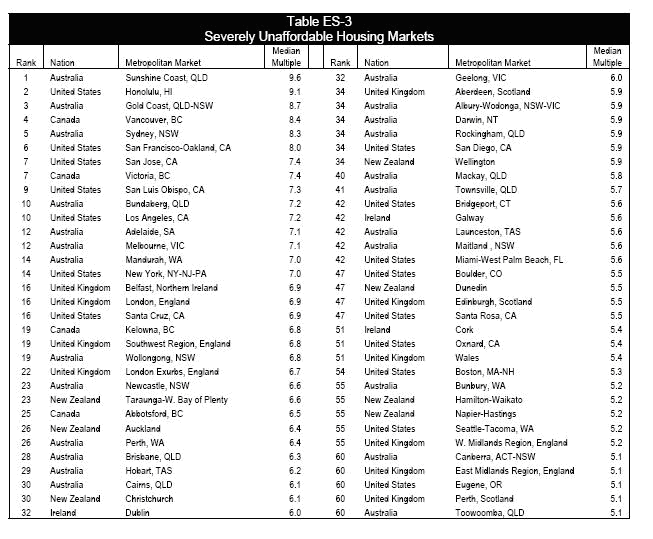 If you're in the market for something "Seriously Unaffordable" you should try Bendigo (4.8), Wagga Wagga (4.9) or the goldfields in Ballarat (5.0).

The other 24 major urban areas surveyed are either prohibitively expensive, or overvalued, depending on your point of view.

"Unlike the other national markets in the Survey," the report surmises, "Australia has thus far been able to avoid material house price declines. It seems likely that, sooner or later, the inherent instability and unsustainability that characterizes bubbles will lead to house price declines in Australia.

"However, were it possible for Australia to retain its highly over-valued house prices, there would still be a significant cost. Future generations would pay far more for housing than in the past, and Australia's relative standard of living would decline."

Far be it for us to suggest that Australia's love affair with homeownership could be financially ruinous at these prices. Besides, we don't have to say it when you can see it for yourself in the image below. But the generation psychology of getting rich in property is hard to break.

It's worked for the Boomers. Now everyone thinks it will work. Hmmn... 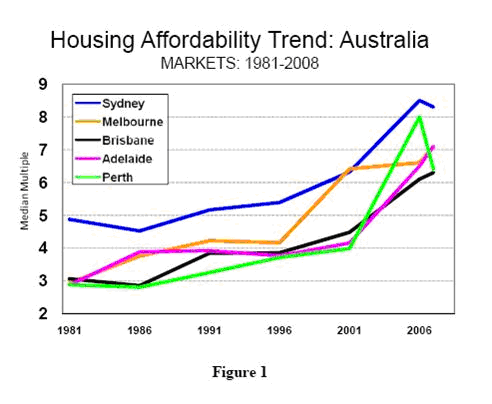 The other side of the affordability ratio is household incomes. And if the latest jobs market data from the US is a preview of what's ahead for Australia and the rest of the Anglo-Saxon world's over-heated housing markets, median incomes are going to decline – not least for the people who got fired.

In the US alone, over 79,000 pink slips were handed out to start the week. Maybe it will be remembered as "Pink Monday". Corporations are hoping to stem the rising tide of red ink by slashing jobs. Caterpillar is cutting 20,000 people loose. Sprint Nextel fired 8,000, Home Depot, 7,000. Pfizer is laying of nearly 19,000. And American Express, after reporting an earnings drop of 79%, is sacking 7,000 workers too.

It's a lot of bad news. But the Amex news shows just how bad things are getting in the real economy.

"Our fourth-quarter results reflect an operating environment that was among the harshest we have seen in decades," Amex CEO Ken Chenault said. Card member purchases declined by ten percent, year-over-year. Amex reported rising late payments, delinquencies, and is expecting larger default rates by its customers.

Do you see what's happening? Consumers are cutting back their use of credit cards. But even so, they are having trouble servicing their outstanding credit card debt. Households have a cash-flow problem too. They too, are overleveraged and have to reduce the amount of debt they are carrying.

The only way to do that is to cut spending. Thus a double whammy for the retail economy. With one hand, households cut spending, damaging business profits. With the other hand, businesses lay off workers, further reducing household income. And on the cycle goes.

The cycle of rising unemployment, negative earnings news, and recession is obviously a big downer for the stock market. Of course, as we write that, stocks are up on the day. But in a credit depression, asset values fall faster than government efforts to reinflate the money supply.

As we've pointed out recently here at The Daily Reckoning Australia, the value of credit outstanding dwarfs the patchwork efforts of various government spending programs to prop up banks and house prices. We'd expect weaker stock prices, falling house prices (yes, even with interest rate cuts from the RBA), and the build up of a big inflation trade.