END_OF_DOCUMENT_TOKEN_TO_BE_REPLACED

HUNDREDS of thousands of homeowners in Texas have made their voices heard after receiving their 2022 home appraisals, says Frank Holmes at US Global Investors.

In Bexar County, where US Global Investors is headquartered, home values have risen 23.2% from last year. Austin homeowners recently got notice that their residences skyrocketed a jaw-dropping 56% in value.

So what's going on? You might say "inflation", and certainly that's part of the story. There's a housing boom in major Texas metro areas, with median home prices in Austin, the next big American tech hub, surging above half a million Dollars for the first time ever. (Back in 2015, a Texas Monthly article asked, "Can You Afford to Live Here?" Since then, homes have doubled in some cases.)

This appreciation is in line with home prices nationwide, which have climbed at their fastest annual rate on record.

In December, houses were selling for 23% more than they were just a year earlier, topping the previous all-time rate of 19% set way back in 1973. 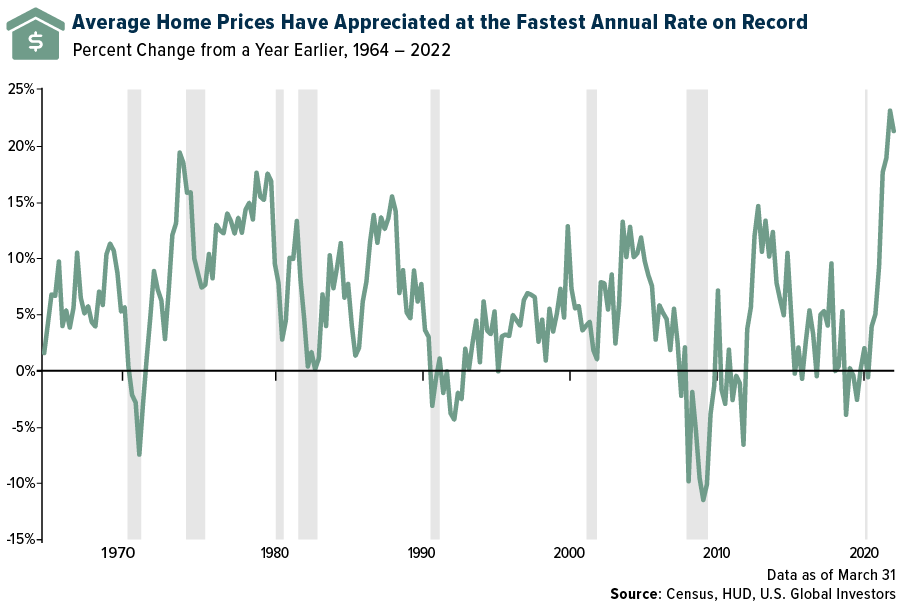 But inflation isn't the full story. Texas famously has no income taxes, but it still has school, hospitals, highways and more that need to be funded. It's for this reason that the Lone Star State has among the highest property taxes in the US – the sixth highest of any state, in fact, according to the Tax Foundation.

When local officials and lawmakers need a bump in revenue, then, homes are inevitably appraised at even higher values so they can tax you more. If you're planning to sell your home, appreciation is exactly what you want to see; if not, then receiving your inflated property assessment was probably a rude awakening.

I feel the same way about mark-to-market accounting. Unrealized gains and losses on corporate investments are recorded on the income statement, meaning revenue can go up or down on paper quarter-to-quarter, and it can look very volatile. The difference with home appraisals is that, for tax purposes, valuations only go up for the most part.

Fortunately, Texas taxpayers are given the right to protest their property appraisals, the deadline for which was May 15. Many districts were expecting a record number of protests and lawsuits.

Change is more likely to happen if enough people raise a fuss.