END_OF_DOCUMENT_TOKEN_TO_BE_REPLACED

How to crush retirement dreams...
WE GOT the latest figures from the Land Registry this week, writes John Stepek at MoneyWeek.
These are the least timely house price figures, but that's because they're based on real, done-and-dusted transactions, whereas all the other price indicators are taken somewhere further up the transaction chain.
You know all that stuff about how the end of the stamp duty holiday was going to poleaxe house prices? Total nonsense, as it turns out.
House prices UK-wide rose by 10.6% in the year to August. That was an increase from 8.5% in the year to July.
We could pore over the data for ages. I'm not going to. Suffice to say prices are rising everywhere. Even London is recovering its mojo after losing out during the great pandemic exodus.
Also, this isn't an outlier. All the other housing market measures point to house prices continuing to rise strongly, despite changes to stamp duty and also despite signs of a return to working in the office. 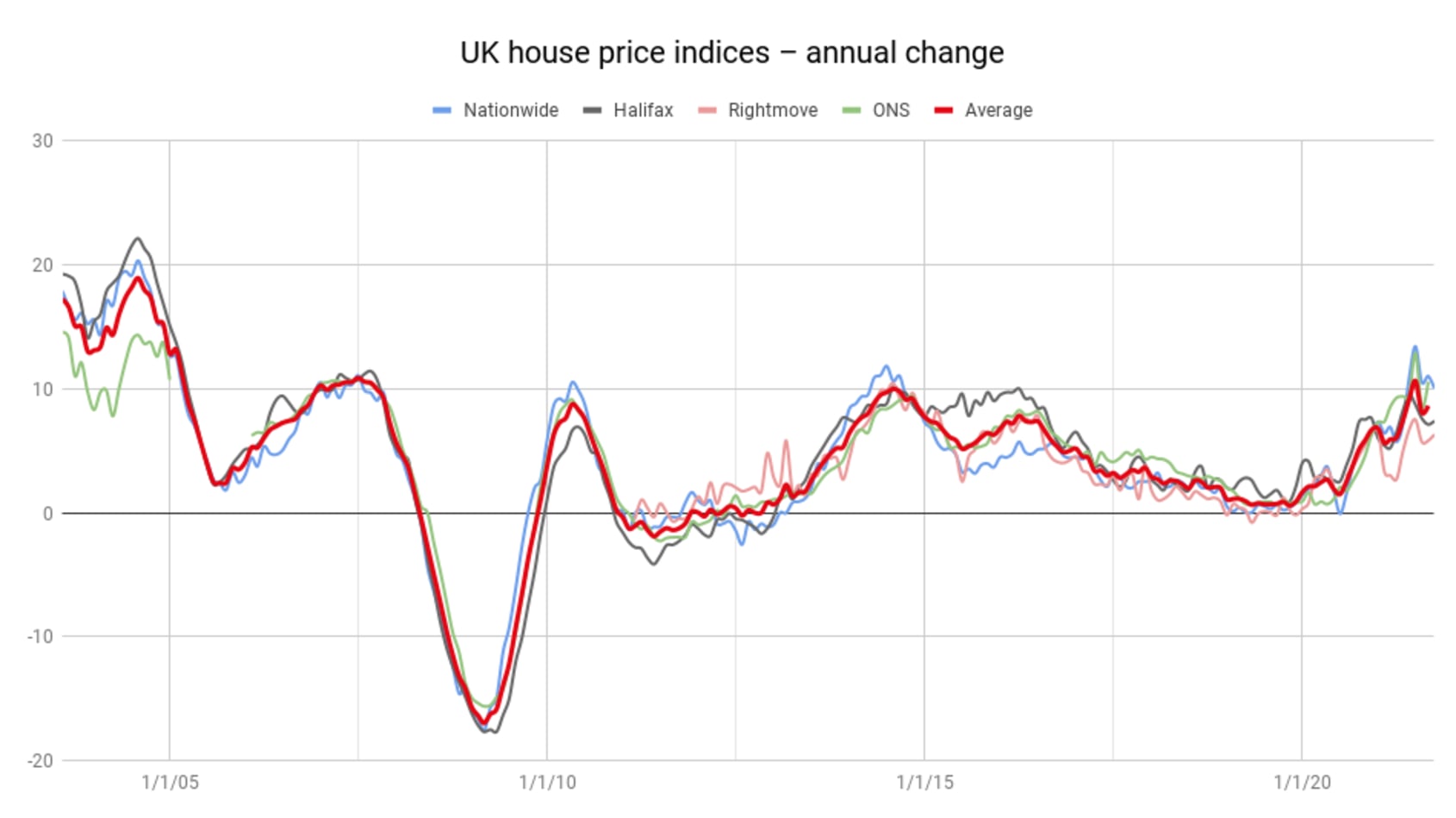 What's driving this?
The big relocation is presumably still one factor.
But by now you'd think that pandemic-related migration from city to country would be starting to tail off, or at least reached its maximum point.
Instead, the big issue for house prices, as we've noted over and over again here, is interest rates. Or more specifically, the cost and availability of mortgage loans.
Mortgages – despite heavy hints from the Bank of England that interest rates will have to rise soon – have never been cheaper. That might well change shortly, particularly as gilt yields have been going up.
The yield on UK government debt and the rate on the average mortgage loan are connected, because the gilt yield affects the price at which the bank can borrow the money it then lends to you.
However, competition is also heating up in the mortgage market. So while the Bank of England might be keen to push up the key interest rate, battles for customers will tend to suppress mortgage costs in the meantime. We saw this during the last boom and bust. The Bank was raising rates, but you could still get your 125% mortgage with few questions asked.
And while the Bank of England is talking about raising interest rates, there's quite a jump between raising rates and doing something that might result in a housing market crash. There's no way the Bank (or the government) wants to see that.
So is there anything that could make the housing market wobble?
Right now, I'm not expecting any big change to the trajectory of house prices. But there is one thing worth watching in the medium term, and that's the government's drive to make us all more carbon neutral.
This may seem odd. How could the drive to make Britain "greener" affect your house price?
Well, one of the government's proposals for getting us all to "net zero" carbon emissions is to make it harder or more expensive to get mortgages on energy-inefficient homes.
Way back in 2007 – almost at the peak of the last housing bubble, ironically enough – the government of the day introduced energy performance certificates (EPC) as part of the home-buying process.
I'm not sure how much attention people pay to them when they're buying a house. I suspect that if you were to plot the time that the average home buyer spends worrying about each part of the process, the EPC would rank somewhere within the bottom 10%.
That looks set to change – not overnight perhaps, but the government's aim is for all homes to meet EPC band C by 2035. Given that the average home in England and Wales at the moment is rated "D", that implies a certain amount of upgrade work that needs to be done.
So how is the government going to encourage this "retro-fitting" of Britain's housing stock? One way is to make it harder to get a mortgage on an energy-inefficient house. With that in mind, the government will be looking at ways to encourage lenders (with targets, quite possibly) to make more loans to "green" homes.
As a result, those who live in, or who want to buy, energy-inefficient homes will have to upgrade them, or see the value of their property fall. Either the homes will be less attractive to buyers, or the buyers who do decide to buy them will need to spend so much extra money on upgrades that they'll be unable to pay as much for the house.
Now none of this is going to happen overnight, but what's interesting to me is that the mere prospect of it happening is bound to do two things. Firstly, it'll make individuals pay more attention to EPCs. Secondly, it'll make lenders start to consider a new set of risks when lending on less energy-efficient properties.
Will that chilling effect be sufficient to put a dent in the market? Probably not yet, bar a few specific cases. In fact if you're a first-time buyer it sounds like you'll just be getting a load more cost dumped on you.
But if you're inclined to be a property investor, for example, or if somewhere at the back of your mind, you're relying on the value of your home for a downsizing or retirement strategy, this is definitely something to take into account.
As Sarah Coles of Hargreaves Lansdown points out, this could "have far-reaching consequences" for those living in old family homes that end up needing a lot of work.