END_OF_DOCUMENT_TOKEN_TO_BE_REPLACED

So if the Dollar is to be an honest, trustworthy currency, the Chairman of the Federal Reserve and the Secretary of the Treasury must also be honest and trustworthy.

Given this inescapable truth, what are we to make of the revelation that the Chairman of the Federal Reserve and the Secretary of the Treasury allowed the multi-trillion-Dollar Libor fraud to operate for more than four years?

"LIBOR, which stands for London Interbank Offered Rate, may seem like a meaningless financial obscurity to most folks," we explained in the July 19 edition of The Daily Reckoning, "But this particular obscurity happens to determine the pricing of trillions of Dollars' worth of credit lines and credit derivatives.

"Therefore, rigging Libor is a little like rigging magnetic north...or its modern-day equivalent, the Global Positioning System (GPS). Every compass in the world would point to a deception. More importantly, your Paris-bound jet might touch down in Tripoli. And even if your Paris-bound jet touched down in nearby Lyon, you'd still be a little annoyed...

"According to press reports," we continued, "only three of the 16 banks that establish the Libor rate have admitted — or sort of admitted — to posting fraudulent LIBOR rates... But very few filthy kitchens contain just three cockroaches."

Just a few days later, the world learned that the Federal Reserve and US Treasury were scuttling around with the roaches. Chairman Bernanke and Secretary Geithner knowingly allowed the Libor fraud to operate for four years! Incredibly, this outrageous revelation produced very little outrage. But the public non-reaction does not make the behavior of Bernanke and Geithner any less outrageous.

If the stewards of the world's reserve currency are able to tolerate four years of cheating in the Libor market, what other frauds do they consider insignificant? Or worse, what other frauds might they be directly aiding and abetting?

But that's not all... The biggest victim of this crime may be the US economy, itself.

What's more, the Libor scandal is not the first instance of large-scale, clandestine market-rigging that has occurred with the full knowledge — if not full cooperation — of the Federal Reserve and/or US Treasury. Remember all those secret, not-so-little loans the Fed doled out in 2009 to various financial firms? These were loans the Fed never disclosed at the time and never expected to disclose...ever. They were secret.

"Recent disclosures from the Federal Reserve reveal that honesty was one of the earliest casualties of the 2008 financial crisis," we observed in the December 15, 2010 edition of The Daily Reckoning. "These disclosures contain a number of juicy tidbits, like the fact that Goldman Sachs received tens of billions of Dollars in direct and indirect succor from the Fed...

"Thanks to the Fed's massive, undisclosed assistance, Goldman Sachs managed to project an image of financial well-being, even while accessing tens of billions of Dollars of direct assistance from the Federal Reserve...

"On June 17, 2009, thanks to some timely, undisclosed assistance from the Federal Reserve, Goldman repaid its $10 billion TARP loan. Just six days before this announcement, Goldman sold $11 billion of MBS to the Fed. In other words, Goldman 'repaid' the Treasury by secretly selling illiquid assets to the Fed... 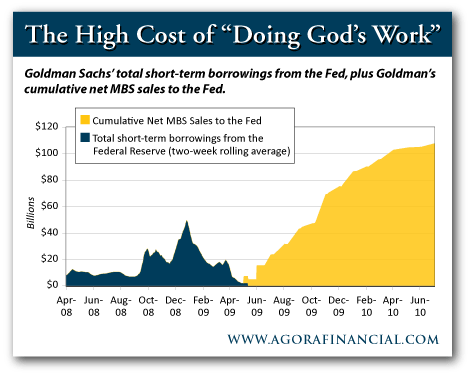 "Yes, would seem to be the obvious answer."

But instead, private investors were forced to match their wits against massive, secret manipulation by the Federal Reserve. This secret manipulation would not become public until 18 months after the fact — long after unwitting investors had lost (or won) the capital the Fed's dishonesty caused them to lose (or win).

Clearly, secret market-rigging is the Fed's lifestyle, not an occasional lark. So the investment capital that is now huddled on the sidelines is unlikely to be thinking, "I'm sure glad the Libor scandal is over and done with. Now I can invest with confidence." Instead, it is likely to be thinking, "Wow! What's next? If the Fed allowed Libor-rigging, what other frauds is it allowing...or directly conducting?"

By his own admission, as early as 2008, Bernanke knew large banks were posting fraudulent LIBOR postings. Geithner has also admitted to knowing about it in 2008. But when the Congressional Financial Services Committee asked the Chairman last month why he never put a stop to the fraud, he replied, "[The Libor rate] is constructed by a private organization in the UK, and so our direct ability to influence that is limited." Geithner provided a similarly feeble defense.

Both men possessed the power to halt a crime spree. Neither did. Instead, they simply winked and nodded at the criminals. Bernanke and Geithner have been doing so much nodding and winking during the last few years that they are starting to resemble narcoleptics with turrets syndrome.

"[Bernanke] is insulting his audience to say there was nothing he could do," gripes Dean Baker, co-director of the Center for Economic and Policy Research, "That is complete nonsense. If he had called up [the head of the Bank of England, Mervyn] King and said that King has to fix the Libor [fraud], and if he doesn't this all goes public, then King would have had no choice... Bernanke allowed this fraud to continue, violating his responsibilities as Fed chair."

The financial markets deserve better. The US Dollar deserves better. And yet, the most scandalous aspect of the LIBOR scandal is that it has produced almost no scandal whatsoever. The Chairman is still the Chairman, doing the same stuff he's been doing for the last six years, whatever that stuff might be. (Don't worry, we'll probably learn all about the stuff he's been doing, eventually...maybe).

"The Libor scandal is clarifying, if not shocking," remarks James Grant, editor of Grant's Interest Rate Observer, "On both sides of the Atlantic, investigations into the alleged manipulation are shifting from the bankers who supposedly did the fudging to the regulators who permitted it..."

Even in the best of circumstances, the Federal Reserve Chairman is a professional price-fixer and market-rigger. "The private sector manipulated prices opportunistically. The public sector rigs them on principal," Grant quips, "In the United States, the Federal Open Market Committee fixes, or 'sets,' the funds rate... It manipulates the yield curve via Operation Twist. It manipulates the mortgage market, along with every other department of the credit markets, via so-called quantitative easing. It attempts to manipulate the stock market (and expectations concerning the stock market)..."

Although these manipulations are usually inimical to free market dynamics, they are, at least, disclosed publicly. Therefore, because they usually unfold in plain view, they do not usually repel or inhibit investment to any great degree. But when the world's leading price-fixer starts conducting and/or ignoring secret market manipulations, that's very bad news.

And neither do many other investors or entrepreneurs. Increasingly, the folks with the capital to risk are refusing to risk it on anything. They are simply refusing to play the game...any game.

The 2012 Survey of Affluence and Wealth in America, from American Express Publishing and Harrison Group, finds that the wealthiest Americans are hoarding three times as much cash as they were two years ago. Their savings rate soared to 34 percent in the second quarter of 2012, up from 12 percent in 2007.

This skyrocketing savings rate is the flip side of lost confidence. A whopping 82 percent of the wealthy respondents said they would increase their spending and investing if they had more confidence in the future.

"[The wealthy are] basically stuffing money under the mattress," says Jim Taylor, vice chairman of Harrison Group. "This has resulted in people managing their risk to a 'no loss' position rather than a 'real gains' position," Taylor said. "That's not the great tradition of American investing."

Clearly, deception and dishonesty are no way to restore or inspire confidence in the financial markets...or to revive America's legendary entrepreneurial dynamism.

Get Allocated Gold – securely stored outside the banking system in your choice of US, UK or Swiss professional vaults – and pay the lowest price possible with BullionVault...