END_OF_DOCUMENT_TOKEN_TO_BE_REPLACED

Not even an $8000 tax break has staunched the loss of value in US housing...

SALES OF EXISTING U.S. homes plunged 17% in December, the biggest decline since record-keeping began in 1968, notes Eric Fry for The Daily Reckoning.

This disheartening news item shocked economic forecasters, but hardly anyone else. Most of us non-experts already knew that folks without incomes or credit buy very few houses.

But for some reason, the experts shun this intuitive logic. Instead, they study their econometric models, tweak their spreadsheets, and go public with forecasts that would embarrass a tealeaf.

These seers might not be so blind if they bothered to observe the world around them, rather than their computer monitors. Then again, the "world" that surrounds most Wall Street economists is a place that still practices (slightly less) conspicuous consumption...and therein lies the root of their woefully misguided forecasts. 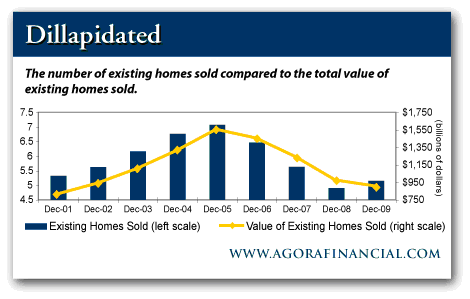 "[But] I don't think there's going to be a lot of buyers out there looking for a home outside of the tax-induced effects until they feel more comfortable with the labor market."

"Past the bottom" but going nowhere is a forecast we can live with. And for perspective, the "recovering" housing market has not really recovered at all.

For all of 2009, existing home sales rose 4.9% to 5.16 million, the first gain in four years. This is the "past the bottom" part of the story. The "going nowhere" part is that the median sales price dropped 12% from 2008, the biggest annual drop on record.

In other words, the NUMBER of existing homes sold increased slightly in 2009, but the VALUE of all existing homes sold actually DROPPED. This unusual divergence suggests that most sales are occurring at the low end of the housing market, where the government's $8,000 tax credit provides the greatest relative benefit.

Meanwhile at the mid- to higher-end of the market, where $8,000 would represent the cost of renovating a half-bath, sales are still dead in the water.

Moreover, as our colleague Dan Denning puts it in his Daily Reckoning Australia today:

"In November, first-home buyers taking advantage of the tax credit made up 50% of demand for existing homes. In December, it fell to 43%. Those two months were supposed to be the final months of the credit. The December decline shows that most people who intended to take advantage of the credit had already locked it in.

"But what now? The credit supported prices and sent sales soaring. The Congress extended the credit through April 30th of this year. But we doubt it will lead to a huge recovery in home prices."

Why not? There is 7.2 months supply of homes at the current sales rate, explains Dan. That's a huge surplus inventory. And it puts massive downward pressure on prices...

...and that's before another likely wave of foreclosures hits the US housing market.