END_OF_DOCUMENT_TOKEN_TO_BE_REPLACED

The death of silver film has been followed by the rise of PV solar energy use...
BACK in the olden days, before the advent of digital cameras, photographers used a curious thing called film, writes Frank Holmes in his Frank Talk blog at US Global Investors.
Surely you remember having to feed a roll of the stuff into your analog camera. Then you'd take the roll to your local drug store and wait a week for it to be developed, only to discover that you had the lens cap on during the entirety of Cousin Ted's birthday party.
What some people don't know about film is that it's coated with a thin layer of silver chloride, silver bromide or silver iodide. Not only is silver essential for the production of film but it was also once necessary for the viewing of motion pictures. Movie screens were covered in paint embedded with the reflective white metal, which is how the term "silver screen" came to be.
Since 1999, photography has increasingly gone digital, and as a result, silver demand in the film industry has contracted about 70%. But there to pick up the slack in volume is a technology that also requires silver: photovoltaic (PV) installation, otherwise known as solar energy. For the first time, in fact, silver demand in the fabrication of solar panels is set to outpace photography, if it hasn't already done so. 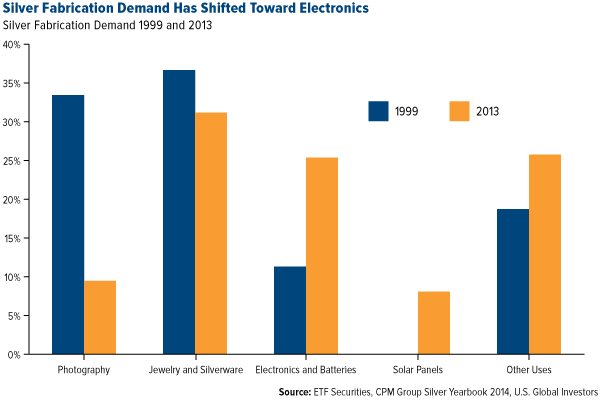 Every solar panel contains between 15 and 20 grams of silver. At today's prices, that's about $20 per panel. When silver was hanging out in the mid-$30s range a couple of years ago, it was double that.
Other industrial uses of silver can be found in cell phones, computers, automobiles and water-purification systems. Because the metal also has remarkable antibacterial properties, it's used in the manufacturing of surgical instruments, stethoscopes and other health care tools. Explore and discover more about the metal's many industrial uses in our " Brief History of Silver Production and Application" slideshow.
Solar energy was once generally considered an overambitious pie-in-the-sky idea, incapable of competing with and prohibitively more expensive than conventional forms of energy. Today, that attitude is changing. Year-over-year, the price of residential PV installation declined 9% to settle at $2.73 per watt in the second quarter of this year. In some parts of the world, solar is near parity, watt-for-watt, to the cost of conventional electricity.
According to a new report from Environment America Research & Policy Center:

"The United States has the potential to produce more than 100 times as much electricity from solar PV and concentrating solar power (CSP) installations as the nation consumes each year."

Additionally, president and CEO of solar panel-maker SunPower Tom Werner says solar could be a $5 trillion industry sometime within the next 20 years, calling it "one of the greatest ever opportunities in the history of markets."
This investment opportunity will likely expand in light of the climate agreement that was recently reached between the US and China. Back in April I discussed how China, in an effort to combat its worsening air pollution, is already a global leader in solar energy, accounting for 30% of the market.
Commenting on how government policy can strengthen investment in renewable energies, Ken Johnson, vice president of communications for the Solar Energy Industries Association (SEIA), notes:

"If governments are smart and forward-looking and send 'clear, credible and consistent' signals as called for by the International Energy Agency (IEA)...solar could be the world's largest source of electricity by 2050."

These comments might seem hyperbolic, but as you can see in the chart below, installed capacity has been increasing rapidly every year. According to the SEIA, a new PV system was installed every 3.2 minutes during the first half of 2014. 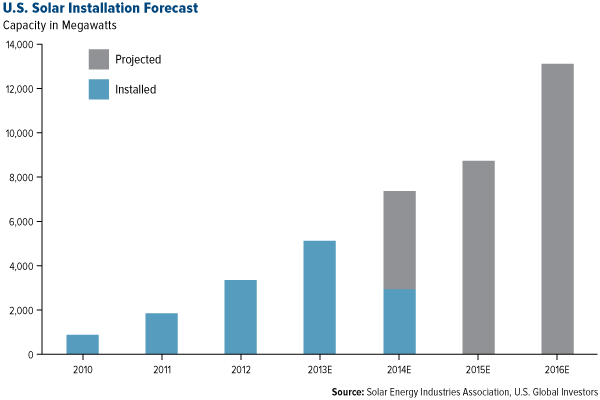 With PV installation on the rise, silver demand is ready for a major surge. About 80 metric tonnes of the metal are needed to generate one gigawatt, or 1 million kilowatts, of electricity – enough to power a little over 90 typical American homes annually. In 2016, close to a million and a half tonnes of silver are expected to be needed to meet solar demand in the United States alone.
Another clear indication of solar's success and longevity is the rate at which employment in the industry is growing. Currently there are approximately 145,000 American men and women drawing a paycheck from solar energy, in positions ranging from physicists to electrical engineers to installers, repairers and technicians. Between 2012 and 2013, there was a growth rate of 20% in the number of solar workers, and between 2013 and 2014, the rate is around 16%. Nearly half of all solar companies that participated in a recent survey said they expected to add workers. Only 2% expected to lay workers off.
What this all means is that solar isn't just for granola homeowners and small businesses. On the contrary, it has emerged as a viable source of energy that will increasingly play a crucial role in powering residences, businesses and factories. Already many Fortune 500 companies make significant use of the energy – including Walmart, Apple, Ford and IKEA, 87% of whose US facilities are powered by solar – with many more planning to join them. This helps businesses save money over the long run and improve their valuation.
It's also good news for silver demand.