END_OF_DOCUMENT_TOKEN_TO_BE_REPLACED

JULY saw the US jobs market fully recoup the number of jobs that were lost due to the pandemic, says Frank Holmes at US Global Investors.

It happened in less than half the time it took to recoup all the lost jobs following the previous downturn. A stunning 528,000 jobs were added in July, pushing the total number of payrolls above the February 2020 level. 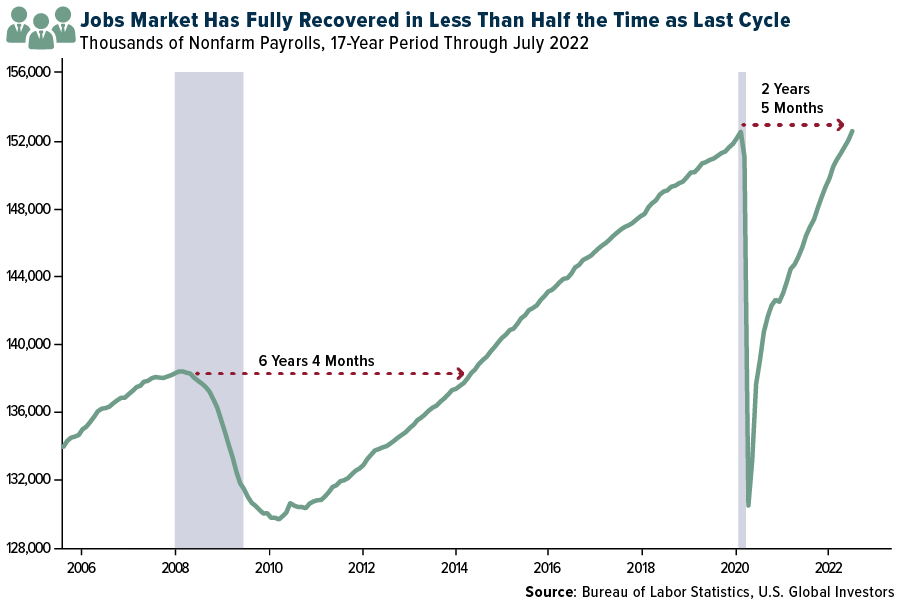 Good news may be bad news in this case, however.

The blockbuster jobs report may prompt the Federal Reserve to tighten more aggressively than planned to cool growth. This could decisively trigger the recession many market-watchers believe we've already entered, with real gross domestic product (GDP) having shrunk for two consecutive quarters, inflation standing at near-historic highs, and a service sector in contraction.

In addition, US yields have inverted at the deepest level since 2000. Last week the yield on the two-year government note traded over 40 basis points above the 10-year yield. Every recession in the past several decades has been preceded by a yield curve inversion, so we may be in the very late stages of the business cycle.

It will be interesting to see what Jay Powell & Co. decide to do at the next Federal Open Market Committee (FOMC) meeting, scheduled for September 20-21. Another sign that parts of the economy may be slowing is lower fuel demand coupled with falling gas prices.

Energy Information Administration (EIA) data shows that this summer, Americans are consuming less gasoline per day than they did in the summer of 2020, when nearly everyone was stuck in their homes bingeing Tiger King on Netflix.

Gas prices above $5 per gallon, it seems, are a greater deterrent to venturing outside your house than Covid fears and government-mandated lockdowns were.

The decrease in driving activity is in line with the results of a recent survey conducted by the American Automobile Association (AAA).

The non-profit found that a whopping 88% of Americans were driving less due to higher gas prices. Three quarters of respondents said they were combining errands in each trip, while 56% said they were reducing shopping and dining out.

Interestingly, only 13% of people who took the survey said they were driving a more fuel-efficient vehicle in response to soaring gas prices; virtually no one, or 2% of respondents, said they were switching to an electric vehicle (EV).

The EIA will report last week's fuel consumption numbers on Wednesday, and I expect to see that demand has jumped back above 2020 levels now that gas prices have fallen for more than 50 straight days after peaking at an all-time national average high of $5.02 on June 14.

Another recent survey, this one conducted by McKinsey & Co., shows that many Americans are still planning a vacation this summer "no matter what" even as inflation remains a top concern. Nearly 70% of respondents said they were taking a trip regardless of rising prices, Covid, a potential economic slowdown, or other worries.

This positive sentiment was echoed by Booking Holdings CEO Glenn Fogel, who told CNBC recently that Americans are "going to keep on traveling and they are going to travel more and more over the long run."

Fogel joined the network to discuss Booking's incredible second-quarter financial report. The online travel agency, which owns well-known brands such as Priceline, Kayak and OpenTable, recorded more room night bookings in the three months ended June 20 than in any quarter in 2019, before the pandemic. Total revenues were $4.3 billion, nearly double what they were in the previous quarter, while net income was $857 million, compared to a net loss in the same quarter last year.

Looking ahead, Fogel expects record revenue in the third quarter, and bookings for the final quarter of the year are currently about 15% ahead of the same period in 2019.

Besides consumers, lower gas costs are beneficial to industries that consume great amounts of petroleum liquid fuels. Those include airlines and shipping container companies, the latter of which is still seeing worsening congestion at ports in North America, Europe and China, according to shipping giant A.P. Moller-Maersk.

The world's second-largest shipping company is often seen as a barometer of the global shipping industry, and if that's the case, Maersk's second-quarter results should put investors' minds at ease.

The Copenhagen-based company reported record revenue of $21.7 billion in the June quarter and a net profit of $8.6 billion, also a new quarterly record.

Based on these impressive results, Maersk is raising its guidance for the full year, from $30 billion EBITDA (earnings before interest, taxes, depreciation and amortization) to $37 billion. It's also raised its free cash flow (FCF) estimate from $19 billion to "above" $24 billion. Maersk's Board of Directors is also increasing the company's share buyback program to $3 billion for the years 2022-2025, up from $2.5 billion earlier.

Some financial news outlets have drawn attention to the fact that Maersk moved 7.4% fewer containers in the second quarter compared to the same quarter last year, but as the company itself points out, this is due to the increasing port congestion, not a meaningful slowdown in demand.

According to the Census Bureau, new orders for manufactured durable goods rose to $272.6 billion in June, a 2% increase from May. Shipments of manufactured goods have also been up 13 of the last 14 months as of June.