END_OF_DOCUMENT_TOKEN_TO_BE_REPLACED

Helicopter Ben has called in the choppers, creating 18 years' of new money inside 3 months...

The US FEDERAL RESERVE is increasing the US money supply at an unprecedented rate, writes Mike Hewitt of DollarDaze.org.

In response to the present deflationary asset crunch – and following the longest running inflationary boom in the country's history – the Fed has added an incredible amount of cash to the monetary base since September. 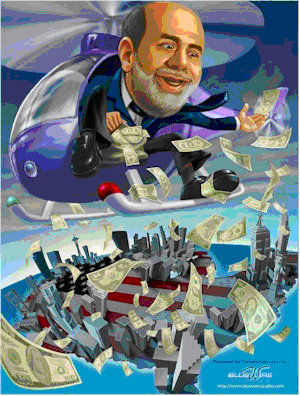 Newly printed dollars are being used to replace the capital losses of America's corporations. If it were possible to replace wealth simply by printing money, humanity would have eliminated poverty shortly after discovering the printing press. Instead, it always results in the same fate – destruction of the currency through the process of hyperinflation.

The last three months have seen an increase of $636.7 billion. That's equivalent to the increases of the previous eighteen years put together!

This policy should come as no surprise, however. On November 21, 2002, then-Fed governor Ben Bernanke made the infamous remark which earned him the nickname "Helicopter Ben", by claiming that deflation need never be an issue for the US economy.

"US dollars have value only to the extent that they are strictly limited in supply. But the US government has a technology, called a printing press (or, today, its electronic equivalent), that allows it to produce as many US dollars as it wishes at essentially no cost."

It would appear that Helicopter Ben is now making good on his word...

Mike Hewitt is the editor of www.DollarDaze.org, a website pertaining to commentary on the instability of the global fiat monetary system and investment strategies on mining companies. The opinions expressed are not intended to be taken as investment advice. It is to be taken as opinion only, and Mike encourages you to complete your own due diligence when making any investment decision.