END_OF_DOCUMENT_TOKEN_TO_BE_REPLACED

OF THE 14 commodities we track closely at US Global Investors, wheat rose to take the top spot for the first half of 2017, returning more than 25%, writes Frank Holmes in his Frank Talk blog.

The grain was followed closely by palladium – used primarily in the production of catalytic converters – which gained 24%. 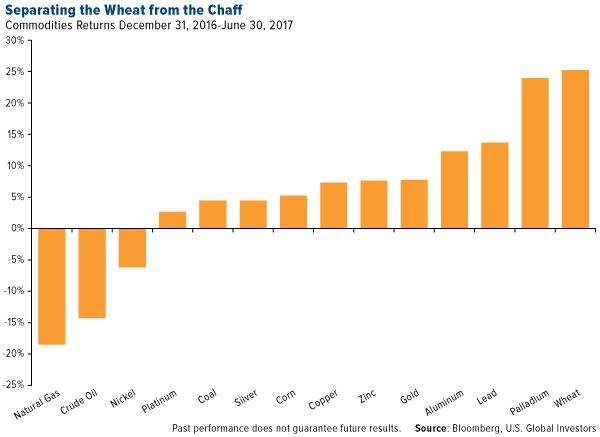 Between the start of the year and June 30, the Bloomberg Commodity Index contracted 4.03%, with energy weighing down on the mostly strong performances of precious and industrial metals and agriculturals.

Contributing to metals' gains was US Dollar weakness. During the first six months, the greenback lost 7.54%, responding partially to President Donald Trump's comment in April that the Dollar was "getting too strong."

More recently, the President tweeted his thoughts on gas prices, which he pointed out were "the lowest in the US in over ten years" for the July Fourth holiday. "I would like to see them go even lower," he added.

Trump just might get his wish. Having fallen 14.30% in the first six months, oil is currently underperforming its price action of the past four years. 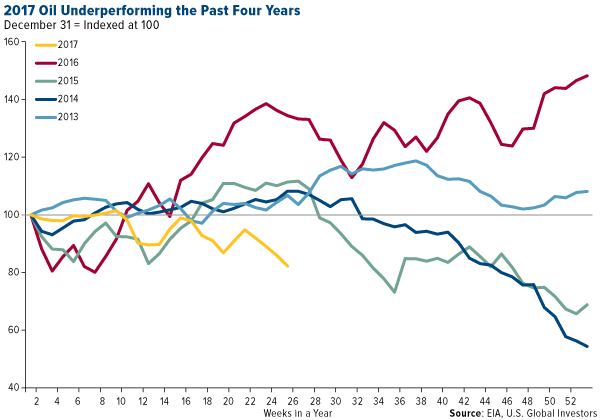 Much of the thanks for oil's slump goes to US shale producers, which were quick to reactivate dormant rigs following the Organization of Petroleum Exporting Countries' (OPEC) December announcement that it would be cutting production.

As a result, the market is awash in black gold. In May, the Energy Information Administration (EIA) estimated that domestic output should average 9.3 million barrels a day this year and nearly 10 million in 2018, a level unseen in the US since 1970.

West Texas Intermediate (WTI) popped above $47 a barrel last week, however, on news that oil and gas inventories in the US dropped sharply the previous week. What's more, the number of active North American oil rigs fell by two in the week ended June 30, from 758 to 756 rigs, the first such contraction since January, according to the Baker Hughes Rig Count.

Although constructive, there's still quite a bit of terrain to cover before oil reaches the low- to mid-$50s we saw at the start of the year.

As I reported back in May, the US reclaimed its longstanding title as the world's number one wheat exporter this year, displacing Russia, whose weak currency gave the Eastern European country a competitive advantage.

We might soon slip to second place yet again, for two primary reasons: 1) low US wheat plantings and 2) severe droughts and unexpectedly hot weather conditions in the Northern Plains.

According to a March report from the US Department of Agriculture (USDA), American farmers just aren't planting wheat like they used to. Not only are we seeing shrinkage in the acreage devoted to the amber grain – more and more farmers are switching to soybeans – but wheat seedings are down for a second straight year. The USDA, in fact, estimates them to be at their lowest level ever since records began nearly 100 years ago in 1919.

As to the second point, severe to extreme hot and dry weather conditions in the Northern Plains – specifically in areas of Montana and the Dakotas – are putting wheat (and corn) on the defensive. According to the US Drought Monitor, parts of Montana just experienced their driest May and June in 99 years and the driest January through June since 1983. Last week alone, temperatures in the region surged into the 90s and 100s, about 15 to 20 degrees above the norm. These conditions are expected to persist for several more weeks.

Supply constraints have pushed the grain up 25% so far this year to a nearly two-year high. A bushel now costs a little over $5, but some analysts see it rising above $6 and $7.

Also benefiting from limited supply is silver, which climbed nearly 4.5% as of June 30. The Silver Institute reported in May that global silver mine production in 2016 declined for the first time in 14 years on lower-than-expected output from lead, zinc and gold projects. World supply decreased 0.6% year-over-year, or about 32.6 million ounces.

Meanwhile, silver's use in solar photovoltaic (PV) cells hit a new record high last year, further boosting demand. As I shared with you in May, solar ranked as the number one source of new electric generating capacity in the US in 2016, followed by natural gas and wind.

In the first half of 2017, palladium, the silvery-white metal used in the production of catalytic converters, has surged to a 16-year high on speculative demand.

At first blush, this trade might seem counterintuitive. After all, gas-powered vehicles, which use catalytic converters to control emissions, are expected to be surpassed in sales by electric vehicles, which do not require palladium, as early as 2040. Volvo just announced that it would completely phase out gas-only vehicles by 2019. Meanwhile, Tesla's first mass-market battery electric vehicle (BEV) finally hit production last week.

Driving palladium's rally this year, though, are bets that European car buyers will soon be switching from diesel-burning to gas-burning cars because of emissions concerns.

Palladium is the smallest of the 4 major precious metals market, making its prices particularly vulnerable to such speculative trading. It's achieved near-price parity with its sister metal, platinum, for the first time in two decades.

On the other end of the spectrum is gold, whose market is larger than many major global stock and bond markets. Those include UK Gilts, German Bunds, the FTSE 100 Index, the Hang Seng Index and others.

Up 7.75% in the first six months, gold was supported largely by strong demand in India as consumers made their purchases ahead of the government's Goods and Services Tax (GST), in effect since July 1, which levies a 3% tax on gold.

The impact of the country's demonetization in December is also still being felt, with Indians' confidence in fiat currencies tested. I believe Prime Minister Narendra Modi's scheme to combat black money and public corruption, while admirable, has only reinforced Indians' faith in the yellow metal as a store of value.

With consumer prices in the US possibly set to begin rising on President Trump's more protectionist policies – once he can get them enacted – gold priced in Dollars could also be headed higher.

There's a lot we'll be keeping our eyes on in the second half of the year. For one, look to India's upcoming Diwali holiday and fourth-quarter wedding season, during which gold gift-giving is considered auspicious.

Earlier in the year, I was excited about Trump's ambitious infrastructure agenda, which would have greatly boosted domestic demand for base metals and energy. But with the Senate still locked in negotiations over what to do about Obamacare, an infrastructure deal looks as if it's months if not years away.

Finally, I think with Tesla firing up its Nevada-based Gigafactory, investors would be prudent to keep their eyes on aluminum, cobalt, nickel and especially copper, as electric vehicles use around three times as much of the red metal as conventional vehicles. Lithium, which I featured back in March, is also expected to be a beneficiary of the move to BEVs.