END_OF_DOCUMENT_TOKEN_TO_BE_REPLACED

Americans stock up on gold, guns...

EVEN AFTER last week's rapid commodities selloff, the "Flight to Safety" trade is still on…big time, writes Eric Fry in The Daily Reckoning.

Gold Prices may have retreated from their all-time highs, but applications to purchase a handgun continue soaring to record levels.

According to the FBI, background-check applications for handgun buyers are on a record-setting pace so far this year. "In this year's first quarter," Bloomberg News reports, "the FBI's Instant Criminal Background Check System processed 4.25 million requests on prospective gun buyers – up 16% from a year earlier." If the current pace continues, the number of "gun checks" would hit a seventh straight annual record. 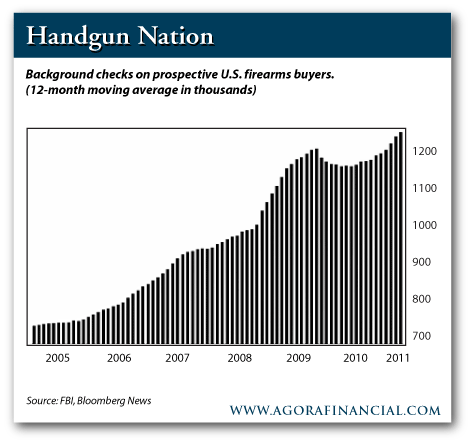 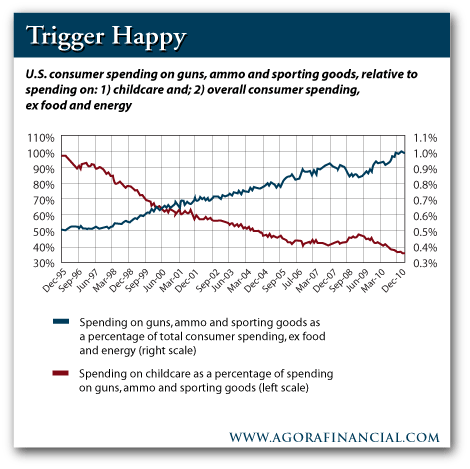 Meanwhile, Wal-Mart CEO, Mike Duke, observes that the retail giant's "core shoppers" are "running out of money much faster than a year ago." Since many of Wal-Mart's core shoppers live paycheck to paycheck, they typically do most of their shopping at the beginning of the month…and less of it at the end. "Purchases are really dropping off by the end of the month, even more than last year," Duke says. "This end-of-month [purchases] cycle is growing to be a concern."

This troubling trend is not just a Wal-Mart thing. As a retailer that averages 140 million shoppers per week to its US stores, Wal-Mart's "concern" is also the American economy's concern. Wal-Mart is, as CNNMoney puts it, "a barometer of the health of the consumer and the economy. Wal-Mart has struggled with seven straight quarters of sales declines in its stores."

Maybe that's why Wal-Mart announced last week that it would resume selling guns and ammo in many of its stores – ending a five-year hiatus. (Handguns will not return to Wal-Mart shelves, but rifles and other "long guns" will, according to a recent press release).

It is not certain that America's "gun boom" (pun only partially intended) means something...but it likely means more than nothing. Roughly 14 million Americans – about one in twenty – tried to buy a handgun last year. Another 16 million will shop for a sidearm this year.

These 16 million folks certainly do not share identical motives for their purchases, but they do share an identical objective: to arm themselves. They are buying handguns in record numbers because they are feeling uneasy in record numbers.

It would be easy to dismiss the "gun boom" as an irrelevant cultural curiosity…if it wasn't so seemingly relevant. Investors are also "arming themselves" in record numbers. They are Buying Gold and silver and oil and almost any other commodity under the sun.

At the same time, they are also unloading US Dollars in exchange for almost any other currency under the sun. The Norwegian Kroner, Swiss Franc, Aussie Dollar and Canadian Dollar are all trading near all-time highs against the US Dollar.

Something serious is going on here. America's economic recovery may be much weaker than advertised, while her economic vulnerability may be much greater than widely believed.

Confident citizens do not usually buy record amounts of guns and gold.

Looking to "arm yourself" with Gold Bullion? Buy through BullionVault and take advantage of safe, low cost storage in your choice of New York, London or Zurich...