END_OF_DOCUMENT_TOKEN_TO_BE_REPLACED

Why the world's biggest bond fund is fleeing US Treasuries...

PURCHASES OF US TREASURIES by the US Federal Reserve show a strong correlation with commodity prices, writes Eric Fry at The Daily Reckoning.

Just look at this chart: 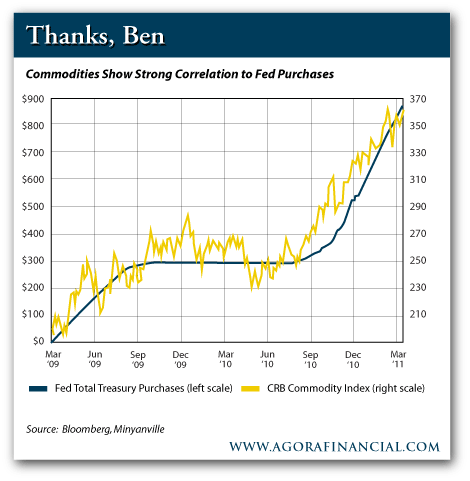 Bill Gross, founder of Pimco, the $1.2 trillion investment management firm that used to buy bonds, has stated very publicly that he considers US Treasury securities to be high risk, low reward investments.

"If I were sitting before Congress," Gross recently remarked, "and giving testimony on our current debt crisis, I would pithily say something like this: 'I sit before you as a representative of a $1.2 trillion money manager, historically bond oriented, that has been selling Treasuries because they have little value within the context of a $75 trillion total debt burden. Unless entitlements are substantially reformed, I am confident that this country will default on its debt; not in conventional ways, but by picking the pocket of savers via a combination of less observable, yet historically verifiable policies – inflation, currency devaluation and low to negative real interest rates.'"

Gross is not merely selling Treasuries, he is selling them short. His flagship, $235 billion Pimco Total Return Fund (PTTAX), now holds a net short position in "government-related" debt securities, while also sitting atop an enormous $73 billion pile of cash.

As such, Zero Hedge's Tyler Durden points out, "The world’s largest 'bond' fund now has cash, at a stunning $73 billion, or 31% of all assets, as its largest asset class on both a relative and absolute basis. We repeat: cash is more than PIMCO's holdings of Treasurys and Mortgage securities ($66 billion) combined…US debt is no longer the safe haven it once was. Which begs the question: when will the Total Return Fund break out a 'gold' asset holdings line item."

Whether or not Gross begins adding precious metals to the Total Return Fund, he is clearly erecting defenses against Ben Bernanke’s "War on the Dollar". Yes, it is a war, even though the Fed never officially declared it. And history demonstrates that undeclared wars can inflict casualties just as well as the officially declared kind.

In fact, wars on money always begin as "covert ops" and usually proceed as "classified" campaigns, far removed from public scrutiny. As long as these wars inflict limited damage, as measured by published inflation rates, the money-holders rarely complain. But if/as/when inflation starts inflicting painful wounds, the money-holders scream. By that point, often, the money-holders have already lost the battle.

Ben Bernanke does not mean any harm, of course. He doesn't really want to prosecute a war against the Dollar. That thought has probably never occurred to him. But so what? That’s exactly what he is doing…and the free-spending members of Congress are his conscripts. Together, they wage war against the Dollar with their trillion-Dollar deficits and money-printing schemes.

This blatant Ponzi scheme seems to be working so far…and we predict it will continue working…until it doesn't. Anticipating that day, Bill Gross, the "Bond King", is selling bonds and asking himself, "Who will buy Treasuries when the Fed doesn’t?"

"If the USA were a corporation," Gross concludes, "then it would probably have a negative net worth of $35-$40 trillion once our 'assets' were properly accounted for, as pointed out by Mary Meeker and endorsed by luminaries such as Paul Volcker and Michael Bloomberg in a recent piece titled 'USA Inc.'

However approximate and subjective that number is, no lender would lend to such a corporation. Because if that company had a printing press much like the US with an official 'reserve currency' seal of approval affixed to every Dollar bill, that lender/saver would have to know that the only way out of the dilemma, absent very large entitlement cuts, is to default in one (or a combination) of four ways: 1) outright via contractual abrogation – surely unthinkable, 2) surreptitiously via accelerating and unexpectedly higher inflation – likely but not significant in its impact, 3) deceptively via a declining Dollar– currently taking place right in front of our noses, and 4) stealthily via policy rates and Treasury yields far below historical levels – paying savers less on their money and hoping they won't complain."

Gross is fortifying his defenses and manning the ramparts for a long, bloody campaign.

Planning to fortify your defenses with Gold Bullion? Visit BullionVault...