END_OF_DOCUMENT_TOKEN_TO_BE_REPLACED

This is not a replay of the post-QE stockmarket boom of 2012 onwards...
A YEAR AGO we began tracking a 'Macrocosmic' theme that would eventually see gold bottom and rise vs. stocks and bonds in 2016, joining its bullish status vs. commodities, which had been in place since 2014, writes Gary Tanashian in his Notes from the Rabbit Hole.
Nominal gold bottomed in December 2015 before silver, commodities and stocks as a counter cyclical environment birthed a new precious metals bull market. We updated the progress to our original analysis throughout 2016 so far.
But markets, being the product of immeasurable moving parts, are always in motion and you cannot get too hung up on any one theme, ideology or habit. When the Semiconductor sector began burping up its positive signals for the economy and for stocks, we listened intently and I for one, put my capital where my mouth was and noted as much each week in NFTRH.
Back in April, with the first improvement in the Semiconductor Equipment sector's bookings, we went on bull alert. By June 22, we had established a trend in the rising bookings and noted the details behind semiconductor leadership and the bullish implications that this Canary's Canary in the coal mine carried.
With silver firmly leading gold and more recently palladium making a move as well, we had the makings of a risk 'on' atmosphere. The 'buy' point (and speaking personally, short-covering point) was the Brexit hysteria, which as NFTRH noted at the time was an exclamation mark on the bear case and quite possibly, the deflationary case.
It was time for an economic growth spurt, quite possibly an inflationary economic growth spurt. First gold broke down vs. silver and then it did so vs. palladium. In January 2013 we used gold vs. palladium as a cross reference to the Semi Equipment upturn that had just begun.
This time we have an echo, only this time… silver is playing ball and hence, the precious metals are out in front of the broad market rallies and the indication may be inflationary as opposed to 2013's global deflationary/US Goldilocks. Here is gold vs. commodities, with the key breakdowns in the last two panels. 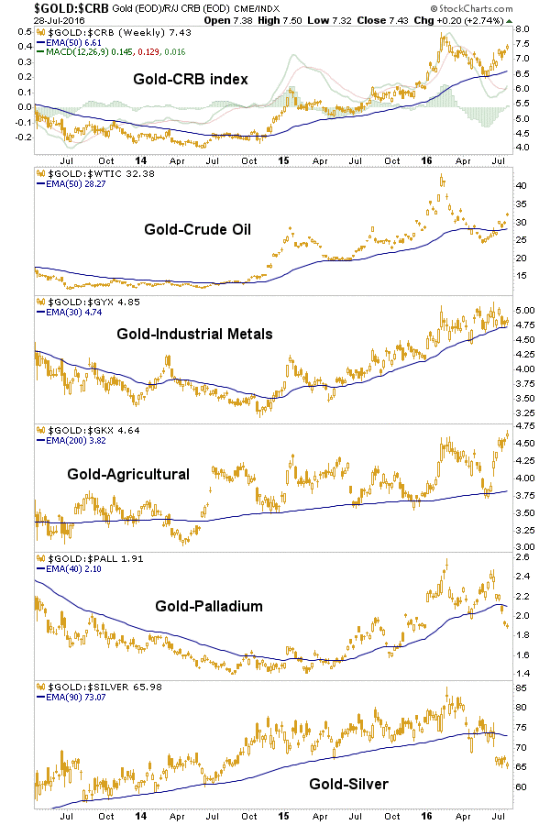 The above signals are bifurcated as the top four panels point counter cyclical still, while the bottom two opened up a pro-economy cyclical view. We can only go by what is in the markets and what we have are some mixed signals. But the trend in the signals is toward a firming economy with potential increasing inflationary issues (the Fed's stated goal is to increase headline inflation after all) as evidenced by the economy-leading, cyclical Semi Equipment sector and firming price signals within manufacturing.
So unlike the post-2012 phase when the precious metals and commodities got hammered into the depths of a bear market, we are using the 'Greenspan blueprint' on the current cycle. In that scenario, gold and stocks can rise together.
The first phase of the precious metals' initial bull market rise is maturing and we have defined the stock market bull trigger out of the Brexit drama to be a "suck-in", but so too was 1999-2000 a suck-in. A lot of actively shorting bears got blown up back then and a lot of actively longing bulls made money (temporarily, at least).
So the current stock market view is one of taking some of the well-earned profits (the market is generally very over bullish, sentiment wise) from having been brave while many were cowering at the negative hype and rotating to positions that look relatively prospective. For instance, I have been taking profits in the Semis (here and here for example), which are now over bullish with the herd stampeding in, and buying other items from Asia (ex-Japan) to India (each ongoing NFTRH trade ideas) to individual stock situations that look interesting.
In the precious metals, I tell you that I am not the one who has been a resolute bull with a "buy, hold, win" mantra. That would be my friend at IKN, who has distinguished himself so well this year not only in philosophy, but in the quality gold stock situations he covers. And yes, that's a well deserved plug for a rarity in gold-sector-specific analysis.
In the precious metals, NFTRH simply continues to advise when risk is high (as with the recent short-term top amid rampant over bullishness) and when risk is favorable, as with an NFTRH update last Friday and last week's report. As part of #405's 'Wrap Up' segment…

"…over bullish sentiment is all gone (by Sentimentrader's data, at least) in this bipolar sector. With the average gold bug now convinced of correction the sector seems to be shaping up for re-entry."

There was one more hard down day and then all that negative sentiment manifested in a new bounce and potential new up leg.
We have our targets for the metals and the miners and, given the mature state of the initial bull launch phase, I will continue to sell the surges and buy the pullbacks (especially when sentiment gets cleaned up as well as it did last week). Meanwhile, stop losses are easily observable in an up trend.
As we approach the end of summer and the rancorous political theater, market participants can be on alert for changes toward year-end and a return of volatility across most sectors. But for now, despite short-term risks building in stocks, we have passed 2016's mid-point in great shape with markets generally performing per our indicators and thus, expectations.