END_OF_DOCUMENT_TOKEN_TO_BE_REPLACED

The Greek crisis could be back in the headlines soon – and in a big way...

IN THE WORLD of money and finance we all too often think in abstract terms, writes Greg Canavan for the Daily Reckoning Australia.

Money is after all an abstract concept. But at its core, economics is about human beings going about their daily business. We make choices. And these choices filter through into the financial world.

At least, in a free market that's how things are meant to work. In today's increasingly interventionist world, the process also works in reverse. That is, what happens in the abstract financial world – such as the Greek debt crisis, has a major impact on human decisions.

And we mean major. Take this report from the BBC:

Greece's financial crisis has made some families so desperate they are giving up the most precious thing of all – their children.

One morning a few weeks before Christmas a kindergarten teacher in Athens found a note about one of her four-year-old pupils.

"I will not be coming to pick up Anna today because I cannot afford to look after her," it read. "Please take good care of her. Sorry. Her mother."

Is this what trickle-down economics has become? Decisions made to protect the banks and the precious Euro project has bled Greece dry. The country is in a depression.

As the following graphic shows, Greece's economy shrunk by around 5.5% in 2011 and could contract by a further 6.5% in 2012. With no debt relief in sight, Greece's debt-to-GDP ratio continues to climb as GDP shrinks. 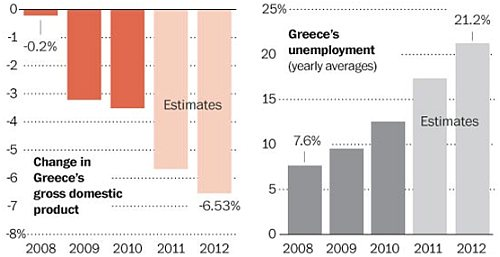 The country is in an economic death spiral. The Washington Post reports...

"Conditions have deteriorated so dramatically that doctors in this country now believe that the Greek crisis is no longer just a financial crisis but a humanitarian crisis," said Dimitris Varnavas, the president of the Federation of Greek Hospital Doctors' Unions.

Towards the end of 2011, Greece moved to the side of the financial stage, giving room for Italy to play a starring role. But that has not stopped the economic situation deteriorating daily.

The markets stopped worrying about Greece towards the end of last year when one of the many emergency summits stumbled upon a 'solution'. The bureaucrats decided that holders of Greek bonds would take a 50% haircut, with the aim of reducing Greece's debt burden to a 'manageable' 120% of GDP within a decade.

Although it was a farce, the markets liked the short-term respite it offered. Now, events haven't played out the way the central planners, err...planned.

Over the past few months, the banks that originally held the Greek debt have sold much of it to specialised hedge funds. The whole agreement about taking a 'voluntary' 50% write down on the value of the debt is now in question. The hedge funds don't want a bar of it.

There is a large chunk of Greek debt – around €14.5 billion – maturing in March. Greece needs the next tranche of the IMF bailout funds to make the payment. Because the hedge funds now own a large amount of this maturing debt, they have no incentive to agree to a voluntary restructuring.

It's a high stakes game. Without a deal on voluntary restructuring, the IMF says it won't pay the next bailout instalment. But if it doesn't provide Greece with more funds, it risks bringing on a disorderly default. This is the precise outcome everyone has tried to avoid from the start.

An outright default or a forced (non-voluntary) restructuring would trigger all the insurance policies (credit default swaps) taken out to protect against a Greek default. This could knock down the house of cards that is the European and international financial system.

Those writing the insurance have most likely hedged their exposure to someone else – and so on and so on – until no one knows where the risk really resides. And no one wants to find out.

So we're back to where we started with bankers and politicians desperate to avoid a Greek default, but with no credible plan to achieve such an outcome.

Despite the billions of Euros in aid (which has only gone back to those holding maturing bonds) Greece is even deeper in debt and has a much smaller economy than when this whole mess started. Its debt-to-GDP ratio will be much higher than anyone expected. That means ever greater haircuts, or all-out default, is the only way out of the debt trap.

But right now, a debt trap is what it is. We can talk about numbers and hedge funds and default and what it all might come to ad nauseam. But a debt trap is a social disaster. Among many other individual tragedies, it results in parents giving up their children. This already happens in many developed societies, but in Greece, where the family unit is sacred, it's a very big deal.

Despite the market's optimistic tone to start the New Year, expect Greece and Europe to be back in the headlines very soon. And in a very big way.