END_OF_DOCUMENT_TOKEN_TO_BE_REPLACED

A good old-fashioned bank run is underway in Greece. Spain next...?

In PAMPLONA, SPAIN the locals run with the bulls. Whereas in Athens, Greeks run on the banks, writes Eric Fry, reporting from Laguna Beach, California for The Daily Reckoning.

Yes, a good old-fashioned bank run is underway in Greece. 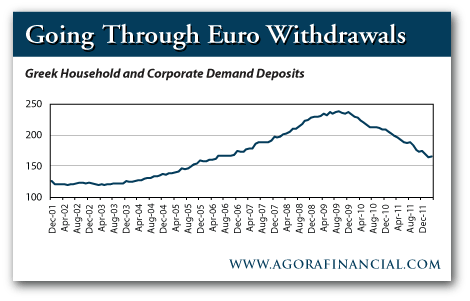 During the last couple of years, anxious Greeks have yanked a net €72 billion from their domestic banking system — or nearly a third of total short-term bank deposits.

And according to the scuttlebutt, withdrawals have been accelerating in recent days, as the "unthinkable" possibility that Greece might withdraw from the Euro bloc has become increasingly thinkable.

Anxious Spaniards are also queuing up to withdraw their Euros from the banking system, albeit not so fast as the Greeks just yet. Some €1 billion was apparently pulled from newly part-nationalized Bankia last week. And many bond investors are behaving similarly: they are dumping Spanish government bonds and/or buying insurance against a default by the Spanish government.

You all remember Spain, don't you, Dear Readers? That's the country that, if it were an American high school senior, would be voted, "Most likely to follow Greece out of the Eurozone." Spain's fiscal problems are not new news, but thanks to the renewed turmoil in Greece, distress has returned to the Spanish bond market. 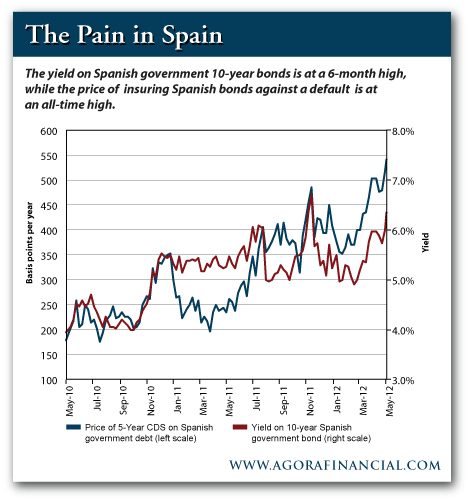 As the chart above illustrates, the yield on Spanish government 10- year bonds recently touched a six-month high, while the price of insuring Spanish bonds against a default just hit a new all-time high.

That's what we would call, no bueno.

Your gold, in a specialist vault, in Zurich, Switzerland, for just $4 per month. Start with this risk-free gram of fine gold right now at BullionVault...