END_OF_DOCUMENT_TOKEN_TO_BE_REPLACED

So check how Cyprus prevented capital flight and saved its economy...
AMERICAN industrialist J. Paul Getty once said: "If you owe the bank $100, that's your problem. If you owe the bank $100 million, that's the bank's problem," writes Frank Holmes here at US Global Investors.
And when the amount is $1.73 billion, it's everyone's problem. Greece is officially in arrears for missing its scheduled payment last Tuesday to the International Monetary Fund (IMF). Expecting this, American stocks had their largest one-day drop of 2015 last Monday. Market volatility, as measured by the VIX, spiked sharply. 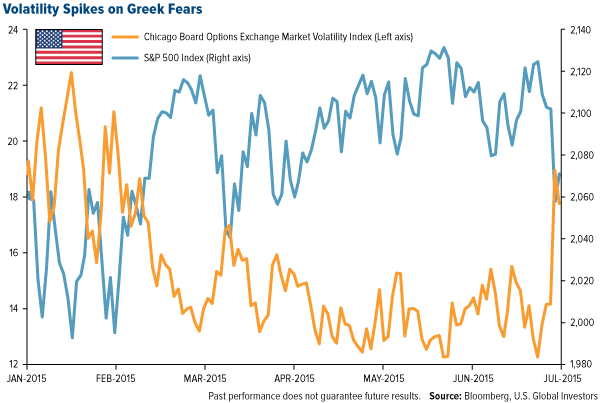 Investors responded by seeking safe-haven investments such as Treasuries, gold and municipal bonds. Because on Sunday, Greece plans to vote on whether to comply with their creditors' present conditions or to reject the terms, a choice some think could lead to a so-called Grexit from the Eurozone.
Currently, there's no such exit clause written into the legal fabric of the currency system other than leaving the entire European Union, an extreme "solution". No matter how this particular act plays out, there are still more (and even larger) loan payments waiting in the wings, the next one owed to the European Central Bank (ECB) and totaling nearly $4 billion.
German Chancellor Angela Merkel, whose country holds the greatest total amount of Greek debt, officially refused to renegotiate the bailout terms until after the referendum. 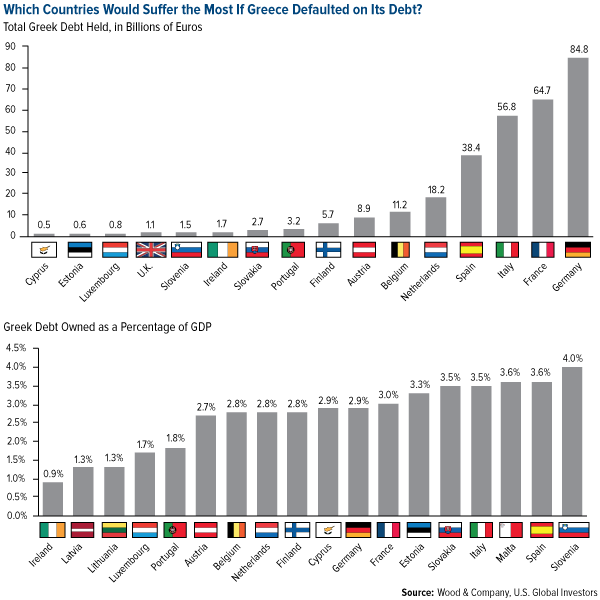 In many ways, the unfolding Greek drama is playing out like a sequel to the Cyprus banking crisis two years ago, which also had far-reaching ripple effects in world markets. But the present situation could potentially have much larger ramifications.
Cyprus has climbed most of the way out of its financial hole after making bad loans to – wouldn't you know it? – Greece, following the 2008 crisis. One of the ways the Cypriot government managed to do this was by implementing capital controls. Cyprus imposed restrictions on how many Euros could be withdrawn per day or taken out of the country, and ATMs rationed cash.
Similar capital controls are now in place in Greece. Banks are closed until at least next Monday – the day after the referendum – and no more than 60 Euros may be withdrawn from ATMs per day, per account. Greeks traveling abroad also face restrictions. Even parents who have children studying abroad will need to apply for permission to send them money. These inconveniences are forcing citizens to realize the possible, and potentially very unpleasant, consequences of a no vote in the upcoming referendum.
One opinion poll right now shows that a slim majority of Greek respondents are in favor of working out a deal with the IMF and other lenders. Former Cypriot Minister of Finance Michael Sarris – who's had plenty of experience with debt negotiations – agrees. He urges Greece to vote yes, stating that to do so "takes [them] back to the negotiating table with the chance of a better outcome."
Among the Greek voters, of course, are pensioners and low-income Greeks who receive government benefits. Fed up with austerity, such voters seem much more likely to vote no. But this way of thinking is precisely what landed Greece in its current situation to begin with. For years the country has been financing its ever-expanding budget with loans from European banks and the IMF, with no plan in place on how to repay them. In fact, Greece has spent 90 of the last 192 years in one financial crisis or another, according to Bank of America Merrill Lynch. 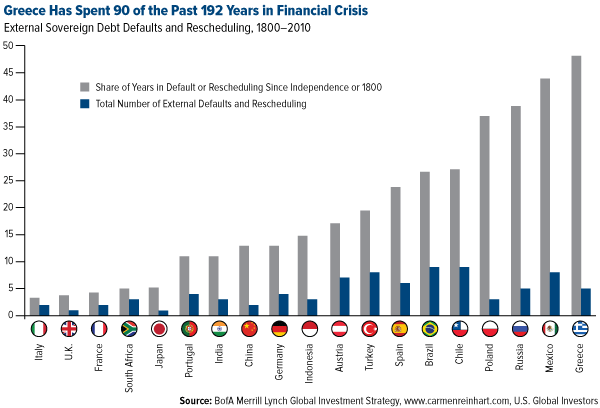 For this reason and more, MSCI – the global index provider – is seriously considering demoting Greece from the emerging market category to the solitary, windswept "standalone" category, which includes Venezuela, Ghana, Zimbabwe and other outliers. 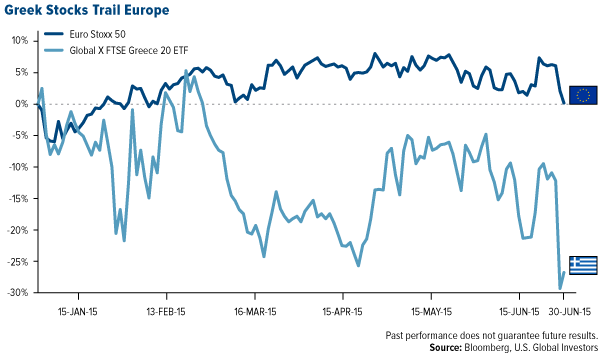 This past April, Cyprus lifted the last of its capital controls. Although it was a painful process, things are moving in a positive direction. Let's hope the people of Greece make the right decision so that their country can likewise begin the recovery process.
Obviously this topic is of interest to our investors, so I'll be sure to update you on how our investment team is handling the situation. For now, it's important to know that a Grexit is unlikely to happen. Such a move would be a huge, symbolic blow not only to Greece, one of the earliest members of the fledgling European Community, but also the monetary experiment known as the Euro. Even Greek prime minister Alexis Tsipras admits that the cost to the EU for kicking Greece out of the Eurozone would be too immense.
The uncertainty has sent shockwaves through world markets, prompting investors to seek safety in core investment assets.