END_OF_DOCUMENT_TOKEN_TO_BE_REPLACED

GOVERNMENTS have always been very good at stiffing those who lend money to them. The history of sovereign finance is a history of broken promises, writes Addison Wiggin for the Daily Reckoning.

As a result, during the boom phase, creditors demand much lower interest rates from government borrowers than they do from similarly rated corporate borrowers.

Such is the predicament in which Greece finds itself today. But the Greek government is hardly unique. Greece may be the poster child of distressed sovereign borrowers, but its grim financial predicament is not so different from that of Portugal, Spain, Italy or a dozen other sovereign borrowers around the globe...including the United States. 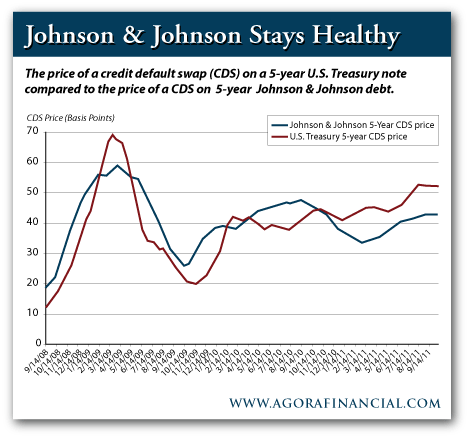 As you can see in the chart above, the CDS price on a 5-year US Treasury has been inching higher and is now above the price of a J&J CDS.

It may seem surprising that CDS buyers would consider Treasury debt riskier than J&J debt. And it is somewhat surprising, until you consider that J&J is the 125-year-old AAA corporation that throws off $14 billion of free cash flow per year, while the US Treasury is the 222-year-old former AAA federal agency that generates more than $1 trillion of negative cash flow per year.

In light of that comparison, the only surprise is that the prices of CDS on Treasury debt are not higher still.

The credit downgrades that are showering down on the sovereign borrowers of Europe and elsewhere are upending a generations-long belief that government bonds are "safer" than corporate bonds...and for good reason.

Throughout the Western world, governments are struggling to confiscate enough wealth to repay their creditors. Meanwhile, many large corporations around the globe have never been in better financial shape in their entire corporate lives.

Consider the striking contrast between the debt levels of the US government compared with the debt levels of the S&P 500 companies. One decade ago, when the Clinton administration was relishing America's last annual budget surplus, US debt-to-GDP was floating around the 60% level. At that same moment in history, the debt-to-revenue of the S&P 500 companies was soaring to 90%.

Over the next six years, US debt-to-GDP inched up to 66%, while the S&P 500's debt-to-revenue jumped to 111%! But then a funny thing happened...corporate debt levels plummeted, while Uncle Sam's debt levels soared.

The Crisis of 2008 pushed hundreds of billions of Dollars of corporate debt into bankruptcy or onto the Federal Reserve's balance sheet, thereby producing the precipitous drop in corporate credit levels from 2007-09. But since then, corporations have continued to retire debt and to bolster their balance sheets with cash. 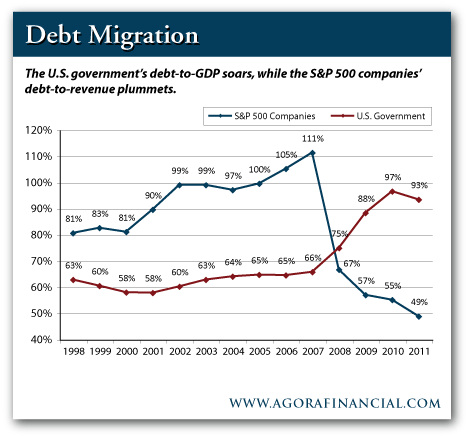 Meanwhile, thanks to a variety of costly "stimulus measures," along with the inexorable upward climb of entitlement expenditures, the US government is now counting its annual deficits in trillions, rather than billions. Accordingly, America's debt-to-GDP has soared from the mid-60% level to nearly 100%.

Municipal finances in the States are also deteriorating rapidly. Rating activity in the "muni" market during the first half of 2011 marked the ninth and 10th consecutive quarters in which downgrades in the municipal sector exceeded upgrades, according to Moody's.

"With negative outlooks assigned to all major municipal sectors, the trend is likely to prevail for all of 2011," the ratings agency grimly predicts.

Once the preserve of widows and orphans, the muni bond market has become a game of chance that would feel at home on any casino floor — right between the craps table and the roulette wheel.

The deteriorating condition of government finances worldwide is causing an entire generation of investors to question the value of a government guarantee, at least in comparison to the value of a strong corporate balance sheet.

This loss of faith in a government guarantee is already forcing government bond yields higher in most parts of the globe. But the potential consequences of this lost faith extend far beyond the bond market.

If investors lose faith in sovereign debt, they are not far away from losing faith in all government guarantees, like the guarantee that a government will make good on its entitlement promises or on its implicit guarantee to preserve the power of its currency.

In other words, the fissures opening in the sovereign credit markets may be signaling the beginning of a tectonic shift in global finance — a shift that forces investors to select investments according to their real-world merit, rather than their government-contrived merit.

Once a government starts breaking its promises, all government guarantees are in jeopardy.