END_OF_DOCUMENT_TOKEN_TO_BE_REPLACED

IT MIGHT SEEM that the appearance of gold in the Wall Street Journal indicates a certain acceptance of the place of gold in the finances of the individual, writes Gasman for the FreeMensch journal online.

But not so. In fact the article is a hodgepodge of subtle misinformation, barely disguised contempt and outright propaganda. Read it for yourself here. Below, I'll just dissect a few of the more egregious half truths.

First, the title – "Catching the Gold Bug". If the Wall Street Journal were presenting an article on investment in companies or commodities would they present a title suggesting that it was a kind of madness or disease? I think not.

The concept of saving in gold (and its inherent suitability for this purpose) has certainly not yet been rediscovered in those quarters. Gold savers are still goldbugs – a term long since linked by association with a kind of village idiot caricature.

"There's 2,000 years of history to show that gold is the best thing to own during bad inflation," says Dr. Van Steyn, a 45-year-old orthopaedic surgeon in Columbus, Ohio. "People used to laugh at me for Buying Gold. They don't anymore."

Much too simple. Actually there is 300 years of evidence that gold will not protect you from credit expansion but it will protect you during the bust that follows. It is an opportunity that comes only once per generation. Buy when deflation threatens. Sell when inflation rages. If the good Dr. Steyn does not know when to sell he will not get rich. No advice from the WSJ on this point.

Is that all? Or do they mean several hundred ounces per investor. That would be more like it.

Certainly, holding bullion carries its own risks, such as keeping it safe. And you also run the risk that gold, as it has in the past, will disappoint investors lured by the storied metal's special gleam.

If they were lured by the metals special gleam, how could they possibly be disappointed? It does not lose that special gleam ever.

Although gold buying by investors has fallen from its 2008 peak, it is still high. The first quarter's 130 metric tons is 50% higher than this decade's average quarterly volume, and analysts say sales for the rest of this year should remain strong.

In the world of the WSJ people only ever buy anything. The supply just magically appears as if from the garden of Eden where there is no scarcity. With gold, more than any other thing, for every purchase there must be a sale. So investors also sold 130 tons. Amount is fixed, total demand = total supply.

All this comes at a time when the supply of newly mined gold is dwindling. Fresh discoveries of deposits are on the wane, and numerous cash-for-gold businesses have sprung up to feed demand. Some employ a Tupperware-party format, where people hold gatherings at home to sell dealers their jewelry and other gold items that can later be melted down.

Earth to WSJ...Earth to WSJ. Cash-for-gold businesses did not spring up to "feed demand". They sprung up because people "lured to the metals special gleam" as a trinket now value it less then people who desire it for its save-ability. An arbitrage opportunity arose and the free market stepped in. Awesome. Its almost like watching Mises' description of the emergence of money in real time.

Many mainstream financial advisers, however, are leery about owning gold in its physical form. "If we get total chaos, are you going to chip off a piece of your gold to buy milk at the store?" says Michael Goodman, president of Wealthstream Advisors in New York.

Maybe, maybe...Or more likely buy the whole store with an ounce or two!

And while they often recommend putting 10% of your portfolio into commodities such as gold for the long term, a number of advisers think that no gold should be included, physical or held in other vehicles such as exchange-traded funds. The thinking is that gold performs best during times of unrest, and not so well at other times.

Gasman thinks that the authors should take a look these charts and then say what they think they would look like just before a "time of unrest". 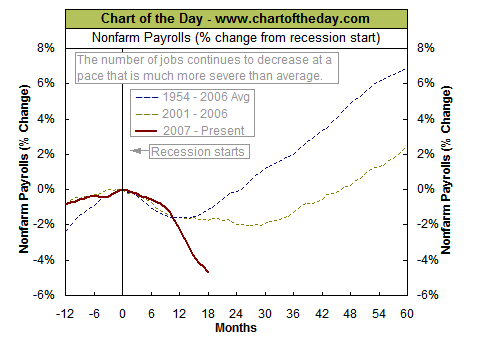 Nothing like these charts I am sure. No, not at all... 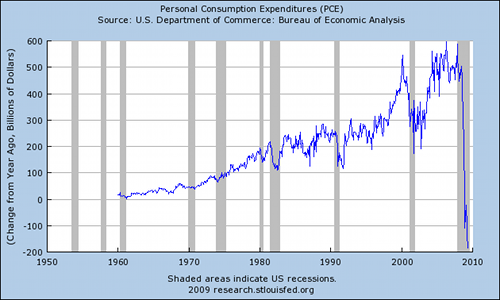 Over the past four decades, gold has been one-third more volatile than the Standard & Poor's 500-stock index, and yet has delivered a lower return: an annualized 8.4%, versus 9.1% for the S&P index, says Steve Condon, director of investor advisory services at Truepoint Capital in Cincinnati.

The biggest threat to bullion, aside from a price collapse, is theft. "The only way to lose gold is if someone steals it," says Dan Deighan, president of Deighan Financial Advisers in Melbourne, Fla., who advocates that his clients own some bullion.

Theft is not a threat that is unique to gold. Just ask the former creditors and owners of GM.

Another way to play gold is via the commodity futures market. You can buy a 100-ounce contract for August at $909,000, putting 10% down. But as with all futures, you run the risk of a huge wipeout if ever-jumpy prices drop.

Leverage never works out too well when prices go down. No matter what the vehicle. Just ask a condo speculator in Phoenix.

Despite renewed investor interest, most gold is still dedicated to ornamental or industrial purposes. According to the World Gold Council, a trade group, there are 163,000 metric tons of gold in human hands, with 51% of it in jewelry and 12% used for such practical applications as electronic circuitry and dentistry. That leaves 16% for private investments, with much of the rest held by central banks.

Rubbish. The simple fact of the price is enough to determine that other substances are more economic than Gold Bullion for most uses. Price directs gold to its most valued use, which is saving. Call it hoarding if you will, but that's what money is for. Without a hoard-able substance we would have to revert to barter and most would starve. The 51% in jewelry is mostly in India and that's a form of saving, hoarding.

So ask yourself the question: If you want to save up for something (and, by the way, you are not allowed to; it's egregious hoarding to the progressives) which is more suitable, gold or a paper ticket claim to another paper ticket?

Gasman's opinion – which everyone is entitled to by the way – is that the Wall Street Journal still hates gold but cannot ignore it any more. They don't understand it yet and maybe never will. So this is not a contrary signal of widespread enthusiasm but quite the opposite.

It's skepticism in the face of ongoing overwhelming superior performance.

Gasman is precisely that – a professional gasman at the University of California, whose Austrian take on the world of finance and economics is better delivered anonymously to the excellent FreeMensch journal. Born in England and brought up in Belfast, he discovered very late that he was not the world's first libertarian, becoming since a disciple of Murray Rothbard.

See the full archive of Gasman.