END_OF_DOCUMENT_TOKEN_TO_BE_REPLACED

HERE ARE a few of the charts we at GotGoldReport are focused on during this pretty uncertain period, writes Gene Arensberg, founder of the GotGoldReport.

We won't go on and on about them, but we will give the gist of what has our attention with them this morning.

First up, the Big Markets, represented below by the S&P 500. 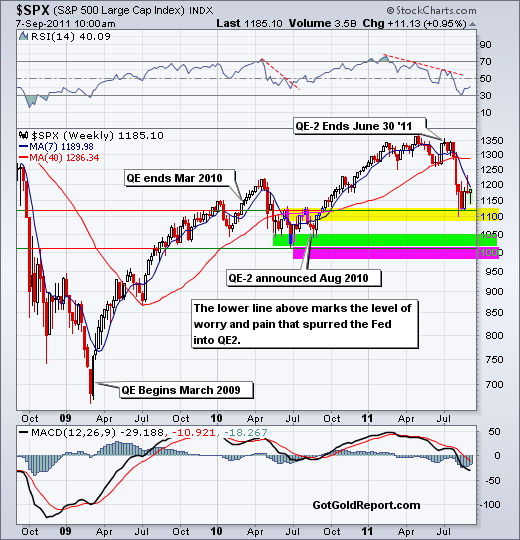 So far it looks to us that despite all the worry, confusion and angst in the world today the S&P 500 has yet to cut a new low since the low three and four weeks prior.

Darn if it doesn't look like the S&P is doing an "echo" to what it did last summer. Notice, please, that even though momentum on this chart is decidedly negative, that the lows being made are actually rising. Our view is that if the world was about to plunge off the rails again, we would likely have already seen new, lower lows on this giant-cap index.

Perhaps Dr. Bernanke's making it unattractive to hold bonds for the next two years has helped to put some support under equities?

Next up, the AMEX Gold Bugs Index attempted breakout out of a wide consolidation since about December may have been given a body blow by Wednesday's smash-down of gold. 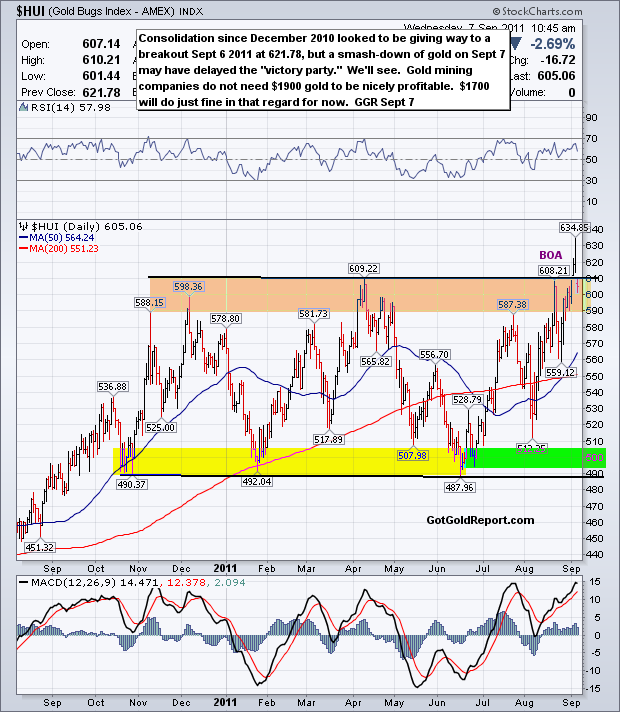 The only point we wish to make is that the big-cap mining stocks don't really need gold to be $1,900 the ounce to have a pretty good time. Our view is that they are likely to be very profitable and throw off strong to enormous cash flow at any Gold Price above about $1,500 the ounce. Another way of saying that is if the large cap miners cannot be very, very profitable at $1,500 the ounce, they would have to be sabotaging their business.

We believe that up to now there has been a general disbelief among portfolio managers and large funds that the Gold Price could be sustained at "high levels." Thus, mining shares have lagged the Gold Price. We believe that we are about to enter a period of convergence, where higher, sustained Gold Prices and higher cash flows/profits do the money manager convincing.

It wouldn't be all that surprising to see one false breakout before the "real deal," kind of like we saw in November of 2009. Let's hope we don't have to wait nine months for the "real deal" breakout to surface as we did then.

Finally, as we get back on the road to the ranch and our HQ near Houston, we would just like to remind everyone that this has been the longest period without a significant correction for gold (on a weekly close basis) since the Great Gold Bull began. Would it be all that surprising to see a period where a negative bias will be 'profitable' for a short period just ahead? 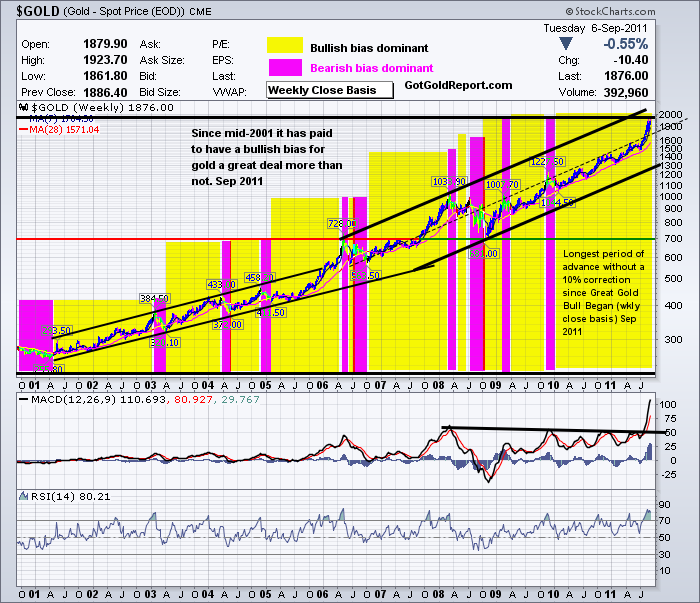 Throughout this entire gold bull move the periods of time that a bearish bias was profitable have been brief. They are loosely represented by the pink zones on the chart above. The clear message of the chart above is that a bullish bias has been much more likely to be profitable than the opposite since about 2001. Is that about to change and for a long period of time? We are very skeptical that such a change is in the offing. How about you?

Of course the obvious other conclusion of that chart above is that up to now, it sure has paid, and paid handsomely to buy the heck out of the very harsh dips for gold.

If we do get a decent correction going here in September/October we can bet there will be legions of people trying to do just that.

Thinking of Buying Gold? Makes it safer, cheaper and easier with BullionVault...