END_OF_DOCUMENT_TOKEN_TO_BE_REPLACED

Under the new Gold Standard, the Dow has lost 12% since the start of September...

ONE-WAY BETS against the US Dollar have been building up over the past eight months, writes Gary Dorsch, editor of Global Money Trends.

Now estimated to total about $550 billion, in what's popularly dubbed the US Dollar "carry trade", this phenomena found its predecessor in the infamous "Yen carry trade". That gained a lot of notoriety after the Bank of Japan pegged its interest rates far below those of any other economy on the planet, enabling hedge funds and other speculators to borrow cheap Yen, sell them into the currency market, and use the proceeds to buy better-yielding assets.

At its peak in the summer of 2007, the Yen carry trade grew in size to some $1.2 trillion, providing the high-powered octane that pumped up commodity and stock markets worldwide.

But whereas the Yen carry trade mushroomed over a period of three years before reaching its zenith, the US Dollar carry trade looks on track to eclipse the $1 trillion milestone by mid-2010. In the case of both the US Dollar and Yen carry trades, ultra-low borrowing rates, combined with an abundance of liquidity, lured multitudes of speculators into riskier bets in commodities and global stock markets, in search of better returns than is available in ultra-low yielding bonds.

Following the Bank of Japan's blueprints, the Fed has slashed the federal funds rate to zero percent, and has kept it there since last December. After its meeting in November, the Fed vowed to keep the fed funds rate locked at unusually low levels for an "extended period" of time. The Fed is aiming to artificially inflate the stock market higher, until the illusionary "wealth effect" kicks in, and US households begin to feel increasingly confident and start spending again.

Stock market investors, who held their nerve and hung onto their shares after the collapse of Lehman Brothers, and subsequent market meltdowns, have enjoyed the biggest rally in decades. The Dow Jones Industrials is up more than 60% from its lows in March, while at the same time, copper, gold, silver, and a broad array of commodities are also zooming higher under the Fed's reflationary policies.

The strategy of fueling bigger bubbles in order to counter the recessionary effects of bursting bubbles – peppered with carry trades, moral hazard, and the suppression of interest rates – is at the core of the Greenspan-Bernanke blueprints to monetary policy.

That is to say, when bubbles are inflating, do nothing. But after they burst, flood the system with paper money to rescue the financial system.

In England and the United States, the Anglo central banks are experimenting a very potent drug, known for its hallucinogenic side-effects, - "Quantitative Easing" that inspires traders to throw all caution to the wind. Bank of England chief Meryn King, and Fed chief Ben "Bubbles" Bernanke are suppressing short and long-term interest rates by flooding the money markets with tidal wave of liquidity. As a result, traders are more willing than ever to participate in speculative bubbles. 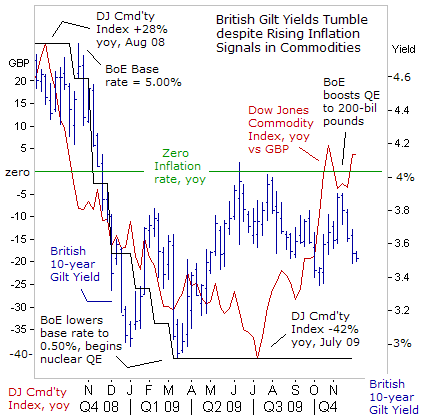 On November 5th, the Bank of England decided to expand its purchases of UK government gilts to £200 billion from £175bn, monetizing roughly 90% of this year's budget deficit.

The BoE has locked its base lending rate at a record low of 0.50% for eight months, and has corralled the 10-year British gilt yield within a narrow range of 3.40% to 4.00%. It's an amazing feat, considering that the UK's Treasury is auctioning a record £220 billion of new gilts this year.

Gilt traders are dancing to the tune of the BoE, and ignoring signs of rapidly escalating inflation in commodities and the explosive surge in Gold Prices to above $1,200 an ounce. There's been a swift turnaround for the Dow Jones Commodity Index, after skidding in July to an annual decline of 42%, only to rebound 5% higher from a year ago versus the British Pound.

For extra insurance, the BoE might print more Sterling, in order to steer away from the deflation zone. Yet still the BoE and the Fed have managed to keep the bond vigilantes under sedation, through massive injections of the hallucinogenic Quantitative Easing drug.

Under this scheme, bond yields are anaesthetized to inflationary pressures, and immune to the avalanche of new government debt hitting the market. However, at some point, bond holders might regain their senses and realize that they've been duped, by lending money at lower interest rates than the "real rate" of inflation. 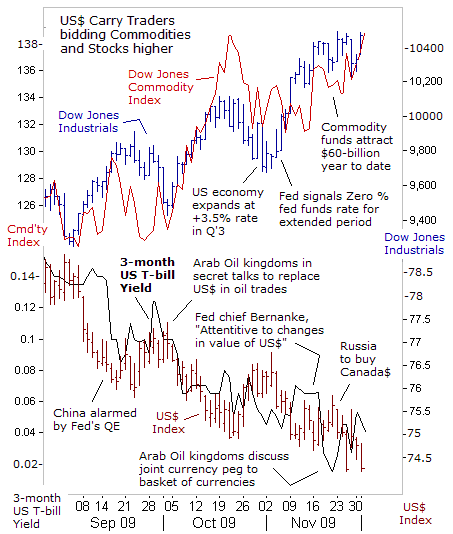 Meanwhile, the Fed is engineering a devaluation of the US Dollar by guiding the Treasury's 3-month T-bill yield towards zero percent. In turn, speculators are borrowing huge sums of US Dollars and buying higher-yielding foreign currencies, base metals, grains, equities, gold, and silver. And there's every indication that the "US Dollar carry" trade could get bigger.

While there are latent fears of bubbles bursting, interest rates pegged near zero-percent for longer than is imaginable will create conditions for commodities and precious metals to go surprisingly higher.

Ultra-low US interest rates and a weaker US Dollar are also drawing "hot money" into the grain markets, despite the weight of mammoth crops. In October, the USDA forecast an all-time high for the US soybean crop of 3.25 billion bushels, and corn production at 13 billion bushels – the second largest ever. Yet since then, corn and soybeans have climbed 20% higher, with near zero-percent yields, fueling the US Dollar carry trade, and whetting the speculative appetite for commodities.

Commodities are on track to attract a record $60 billion this year, already more than the previous record high of $51 billion set in 2006. Total commodity assets under management will probably reach $240 billion by the end of the year, with the largest investments linked to NYMEX crude oil, natural gas, gold and soybeans. Oligarchic banks are also beefing up their commodities staff to take advantage of the upswing in prices and greater risk appetite. Retail traders and swap dealers are also operating in commodities through ETFs, thus magnifying price volatility.

Bernanke and his band of inflationists are happy to see the high-octane carry trades lifting the commodity and stock markets. "Commodity prices, such as oil have risen lately," Bernanke noted on Nov. 16th. "However, that pickup likely reflects a revival in global economic activity and the recent depreciation of the Dollar. But inflation probably will remain subdued for some time.

"It's extraordinarily difficult to tell if a bubble is forming. It's not obvious to me in any case."

Bernanke's sidekick, Fed deputy Don Kohn admits, "One of the purposes of these policies is to induce investors to shift into riskier and longer-term assets." 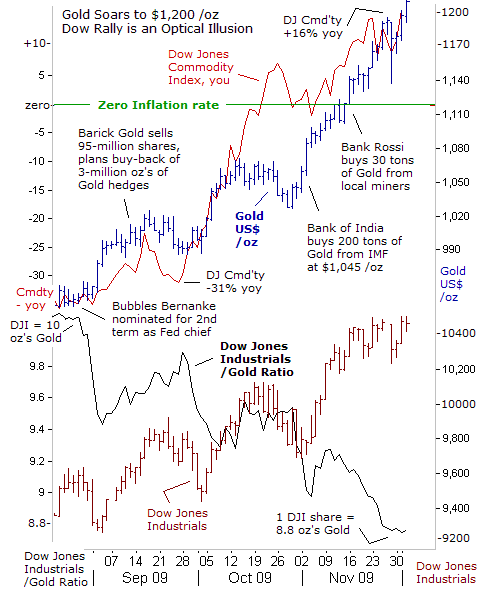 Financial history is marked with times when traders have taken collective leave of their senses and succumbed to the delusions of ever-expanding wealth. Excessive liquidity coupled with visions of new realities allows risks to be downplayed, thereby fueling a massive, largely uncorrected rise in valuations, that discounts not just the present and the near-term, but also a distance far-off into the future.

The parabolic rally in the gold market might in fact, be representing a historic flight from paper currencies of all nationalities, which are becoming increasing worthless, replacing the paper currency system with a resurrection of the Gold Standard.

That is to say, the proper way to value bond and stock markets, would be through the prism of gold, rather than in the host country's currency. For instance, gold's recent surge from $975 to $1200 an ounce coincided with a 13% gain in the Dow Jones Industrials. For many, the Dow's rally above the psychological 10,000 has been perplexing, given the sluggishness of the US economy and the weight of a double-digit jobless rate. The Dow's "green shoots" rally is the least-loved bull market in history.

However, when measured in "hard money" terms, it's apparent that the Dow Industrials is still trapped in a bear market, since one Dow share is worth only 8.8 ounces of gold, or 12% less than three months ago.

Looking to Buy Gold today? "If there's an easier way, I've yet to find it," says one BullionVault user...