END_OF_DOCUMENT_TOKEN_TO_BE_REPLACED

So far this week, it's silver that's making the running...

GOLD AND SILVER both rallied on Tuesday, now that the quarter-end pressure of hedge funds booking profits – so they can pay themselves better bonuses (nothing wrong with that)is gone.

No, we don't think that is the 'only' reason that gold sold down late in typically weak June, but we do believe it is a factor, writes Gene Arensberg, founder of GotGoldReport.

We would like to point out that if Tuesday was a horse race between the two most popular precious metals, and this holiday-shortened trading week (in the US) is the race track, then silver got the better jump out of the starting gate than its yellow cousin, gold, did.

We can tell because as of Friday's data, the Gold/Silver Ratio (GSR) came in with a 44-handle – meaning on Friday it took about 44 ounces of silver to equal an ounce of gold, price wise.

As of the New York close on Tuesday, July 5, the GSR had fallen to a high 42-handle as the chart just below clearly shows. If silver is outperforming gold the GSR is falling. So, at the 'first turn' in this week's metals horse contest 'Hi-ho Silver' has the lead on the rail, with 'Golden Promise' pacing in behind... 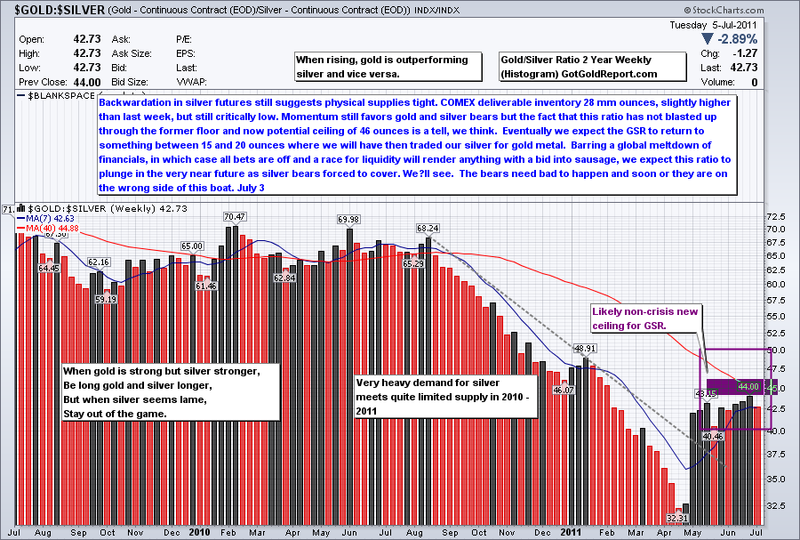 A falling GSR tends to be more bullish than bearish for both gold and silver.

This next chart is so huge that we have to "squanch" down quite a bit. Is the old "floor" for the GSR about to be proven as the new ceiling for the ratio?

Absent another global meltdown we do indeed think it is possible, even likely, that heavier demand for silver than gold will be sustained which supports the technical idea that the old floor might now become the new ceiling.

If true, then a couple of points: Should the GSR travel above 46 ounces to one ounce of gold, then it makes sense to "trade" some gold like-for-like to Buy Silver.

Also, if 46 is the new ceiling; the top of a new range, then where will the new floor develop and when can we expect that?

Everyone needs to decide for themselves where they are comfortable exchanging silver for real gold metal. We have been waiting for this return of silver to its former relationship to gold for a very long time now, so we are comfortable beginning where we said we would. Having said that we have a strong suspicion that the GSR just might overshoot the lower limits of our "envelope" at some point ahead.

Would it surprise us if the GSR eventually trades to less than 15:1 in the future?

Yes, because in our view the difficulty factor for each ratio point below about 20 or so will likely increase exponentially. By the way, at $1,490 gold a 20:1 ratio implies a silver price of "just" $74.50. At 15:1 we are "only" talking $99.33 silver, so we don't really think we are stepping out there with this assessment. How about you?

Buying Gold or Silver Bullion? Get the latest live prices – and deal direct with other investors – at BullionVault...