END_OF_DOCUMENT_TOKEN_TO_BE_REPLACED

Precious metals aren't all responding to the banking crisis in the same way...

IN TROUBLING TIMES LIKE THESE, investors search for safe places to put their money, writes Julian Murdoch for Hard Assets Investor.

With the latest stock-market plunge making many feel like the mattress is a good alternative, are precious metals also serving their role as a safe haven?

Let's go to the charts of gold, platinum and silver. 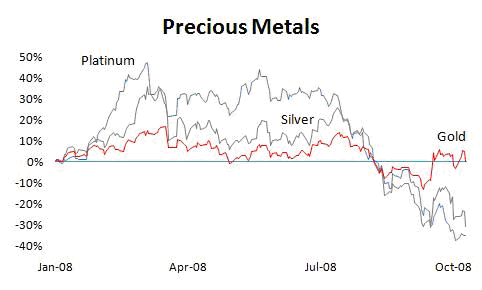 The story here in the precious metal market is a simple one. At the beginning of the year, gold was seen by many commodities investors as "played out", and so the real industrial demand for platinum took center stage instead.

That led to the spike in platinum prices in the first few months of 2008. It didn't hurt that South African platinum miners were failing to cope with unprecedented power difficulties, shutting mines and reducing the supply of platinum worldwide.

Silver, which also has an industrial bent, eventually caught up to platinum's rise in March, before dropping back by one half.

Gold Bullion, meantime, was the laggard among the precious metals. For the first half of 2008, gold limped along like a marathon runner at mile 24, barely squeezing out positive returns through the middle of the year.

The reason? The emerging markets story (a.k.a. the China story) is much weaker in gold. Sure, Chinese consumers may Buy Gold a little more here or there as they join the middle class, but there's nothing to match "Omigosh, we're running out of oil because of surging Chinese industrial demand!"

Whereas that angle does apply to the precious metal of both platinum and silver.

But then, we hit July. In case you didn't know it, the world started going to hell in a handbasket. That played out painfully for broad-based commodities investors starting July 1st. 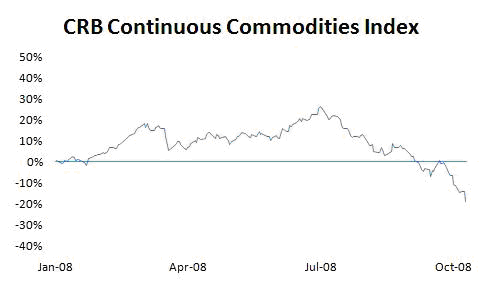 As investors realized that all was not ducky with commodities, they rushed back into gold as a store of value. And as much as I consider myself a rational person, I'm not one to fight the market.

Despite the fact that there's no reason gold should be the thing we place value in, the collective consciousness of the market continues to ascribe value to the yellow precious metal. And this flight back to this agreed-upon de facto currency is what's obviously behind the recent run-up in Gold Prices.

While the rest of the market stumbled, Gold Bullion maintained a positive return for the year, at least until Friday, when it managed to throw away its 5% year-to-date win in a fit of convulsive selling.

So where do we go from here? Let's assume for the moment that the precious metals market isn't headed for an immediate return to low volatility, steady growth any time soon. Let's also assume that consumers remain in a state of too-much-greasy-food nausea for the foreseeable future.

That puts us back in the world of supply and demand – particularly demand. The World Gold Council does a nice job every three months of illustrating what the demand for gold has been, both in quantity (tonnes) and dollar amount, for gold. The latest report available is for the second quarter, which was released back in August. And compared with the second quarter of 2007, the amount of gold used in all areas of what's called "identifiable demand" went down in Q2'08.

Due to higher Gold Prices, this drop in consumption did not result in a lower dollar amount spent. But matching that up against end-of-year information for 2007, here's what the demand situation looked like for the three precious metals at the end of June, just before all this craziness started

What's interesting is the percentage of gold that goes to investment – less than 20%, even if it is a much larger percentage than for silver. By far, gold's most common use is in jewelry. This leaves gold vulnerable to the fickleness of consumer confidence and disposable income.

In hard economic times, demand for luxury items is the first to decline. On the other hand, silver and platinum are used most commonly for industrial uses. We'd expect demand for both to fall in a slowing economy.

These declines in demand for industrial metal and for jewelry are both difficult to predict, but common sense would tell us they'll be lower in a bad economy than a good one.

Gold Bullion, however, is a deeper and more complex story. Because, while it does indeed have to face a potential decline in jewelry sales, we have to wonder how much of that jewelry demand is really just investment demand in disguise?

In India, gold is commonly bought as jewelry not just because it's shiny, but because it's perceived to have lasting value. And that brings us to investment demand. 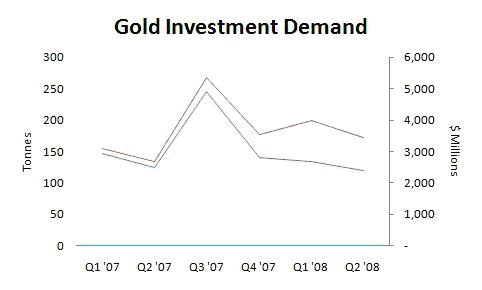 That gigantic spike in demand in the third quarter of 2007 was due almost entirely to Gold Exchange Traded Funds putting on Bullion. And given that Gold ETFs are by far the most heavily promoted way to get in and out of gold in a hurry right now, you'd expect there to be a tremendous demand for them.

And you'd be right: 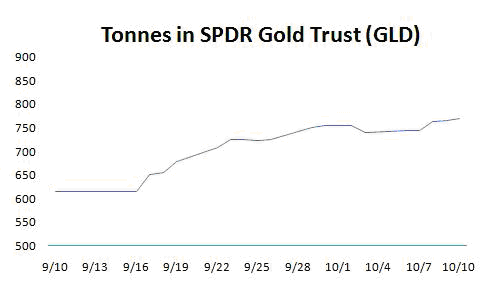 In just a month of trading, the actual piles of Atomic Number 79 sitting in the vault at the SPDR Gold Trust rose 25%. That's a phenomenal amount of gold coming off the street and headed into the vault. And there's no question that investment demand will be driving the gold bus for the next few months.

As if we didn't need further proof that gold is beating silver and platinum, I can't look at a commodity without looking at the stocks of those companies which mine them. 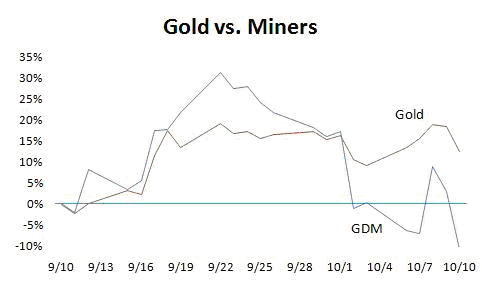 Right now, the gold miners continue to underperform the metal. At one point, the AMEX Gold Miners Index (GDM) was down 56% from its March highs. How long this tremendous imbalance of stocks versus the actual Gold Bullion they produce will last is tough to predict. But with stocks like Freeport-McMoRan (FCX) trading at P/E's under 5, and with stocks generally cheaper than they've been in a generation, how long can the madness last?

In the meantime, I guess it's time to stick Krugerrands in the old sock drawer again, if you can bear the dealing costs and hassle.