END_OF_DOCUMENT_TOKEN_TO_BE_REPLACED

SO WE'VE GOT gold at $1300, silver at $22, big mining stocks within inches of breaking out, the buck gets gutted (and skinned), oil pops above $80, copper trades above $3.65...and the Fed is worried about deflation? Really?

Look, wait a minute, says Gene Arensberg at the Got Gold Report. Isn't this the scenario we thought would happen in 2008, back when the Dollar was under so much pressure then? You know, just before the July Massacre and the world plunged into the 2008 panic from hell?

We are witnessing the process of liquidity fleeing the Dollar and trying to find some kind of "stuff" that will hold its value. This, as confidence in paper and in the governments that print that paper evaporates as the global sovereign race to cheapen most all fiat currencies accelerates. It's just great for gold and silver mavens to be alive.

We worry though, as we probably should, that there is not a happy ending to this movie. To stretch that metaphor, we seem to be in the frantic car chase scene right now, barreling headlong toward a sign up ahead...

For now, we note Silver Prices still outperforming gold, which is always a more bullish than bearish sign for precious metals in general. This is the first time since last October that the Gold/Silver Ratio has moved below 60 ounces of silver to "buy" an ounce of gold.

Notice too that the ICE commercial traders [Ed: the biggest players in the foreign currency market] have now gone "net long" of the US Dollar Index – only a little, but following a very harsh plunge in the greenback. We can expect further intervention by the Bank of Japan most any time, but especially if the Yen trades to below ¥82.5 versus the Dollar.

Note also that, even though gold and silver are at their new highs, the high/low spreads in last week's price action were not contracting. By itself, that suggests strength more than weakness, except when extreme and/or when one is out of proportion to the other.

Finally notice that the gains for both gold and silver are "reasonable" as opposed to "overheated".

As we said last time, gold has seen a remarkable and unusually linear run up to this point. Subscribers to the Got Gold Report made a good, timely entry with our short-term trading capital, and now we want to protect the majority of our hard-won gains while allowing enough volatility to give us a shot at staying in the game if gold continues its historic advance. 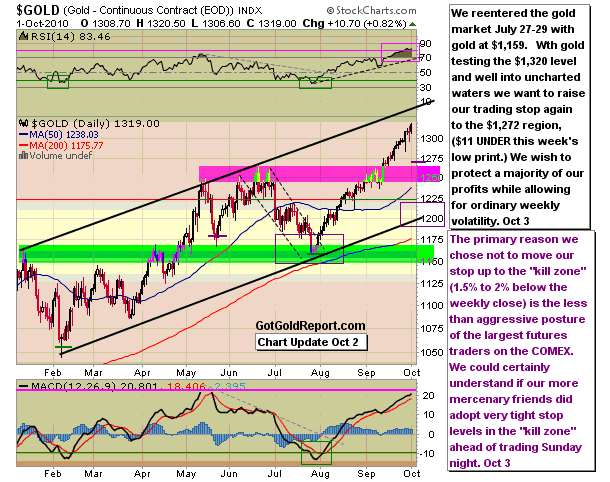 We still believe that gold has entered a favorable period, both seasonally and economically. However, we cannot ignore its being significantly overbought, the continued non-confirmation by the largest Gold Mining shares and the material "opposition" in the futures markets, all of which we detail below.

As for silver, when Silver Prices broke out of their wide triangular consolidation, we managed to secure a one-half normal sized breakout position with an average of $18.71 equivalent. As we also noted on the web log, once we were convinced this current breakout "meant business" we took the other half of the position at an average $20.30 equivalent.

Silver is usually much more volatile than gold, and therefore more challenging to short-term trade. We are not yet seeing aggressive hedging by the Big Sellers in Comex futures; otherwise we would have placed our stop closer to this week's low print of $21.05.

As for gold, resistance is currently undefined and unknowable now that we're trading at new record highs. But traders will likely view $1330 or $1350 as important psychological battlegrounds looking higher. For the past 8 weeks, most all dips – even the smallest of them – have been eagerly bid back higher. That has led to a most unusual looking, near linear upward chart move for gold. We suspect that we are very near now to a more meaningful correction, purely on technical grounds, but even then we suspect that any correction very short term will also be as brief as it is harsh.

When we have had central banks like Russia, China, India, Sri Lanka, Bangladesh, Mauritius, Kazakhstan, and Venezuela on the big for gold in the past year and most probably still on the bid, and when we have Japan, Switzerland, the UK, Korea, Taiwan, Brazil and arguably the US and China also attempting to devalue their fiat currencies at the same time, that strong bid for gold becomes understandable, does it not?

Looking at the latest data from US regulators the CFTC, the relative combined "net short" positioning of the commercial players was statistically flat last week at 48.9% of all Comex Gold Futures contracts open. That is the fourth consecutive week of no material change in the relative net short positioning for the commercial traders (meaning the big banks, refiners, miners and other 'supply side' actors). 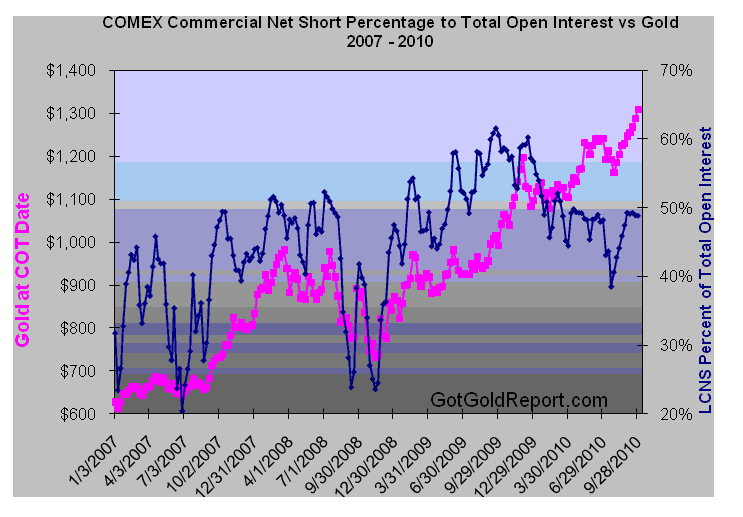 As the LCNS:TO moves higher, it suggests that the largest commercial traders are more willing to increase their net short positioning for Gold Futures and vice versa.

So we find it remarkable that with gold at an all time nominal US Dollar high, and with the total open interest also at a record, the LCNS:TO is surprisingly still slightly under 50%.

For the fourth week in a row, therefore, our view is that the Commitment of Traders' action – as reported for Gold Futures by the CFTC – is intriguingly less bearish for gold than we expected, but we wonder how much longer that will continue. Sooner or later the short side will be looking for blood following such a material move higher.

Speaking very short term, and, mindful of the robust action in silver the past five weeks, it is clear that substantial and perhaps unparalleled liquidity has been flooding into precious metals since August. To us it seemed to accelerate following Fed chairman Ben S. Bernanke's comments regarding possibly more quantitative easing in Jackson Hole on August 27th. His focus then upon deflation and how the Fed would "strongly resist" it – plus his amazing statement that the Fed would continue to resist it until the economy returned to inflation – has been very supportive of the bullish case for gold, silver and some other commodities.

This may not be the first time a Fed chairman has said he would force inflation upon the economy come hell or high water, but it is the first time anyone we talk to has heard such a thing.

We will save the balance of our gold COT analysis for the conclusion (subscribers only), but as we have been saying and we still believe: Given the very strong demand for physical metal on the commercial bullion markets and a now very large offside short position in futures, we fully expect that dips in the price of gold will likely be extraordinarily well bid near term.