END_OF_DOCUMENT_TOKEN_TO_BE_REPLACED

Gold-Silver Ratio rises to 70 as gold outperforms silver amid the "fiat currency" crisis...

WE HAULED OUT the "caution" flags in our Got Gold Report four weeks ago, writes Gene Arensberg in Houston, Texas, because of the ominous signals then showing in the data, charts and ratios we follow closely here at GotGoldReport.com.

The subtitle of that subscriber report said, "Rig for heavy weather and hope we don't get it!" We then wondered whether "we [were] about to enter the eye of the storm or the eye wall itself..."

Since then the world has given us all a heavy dose of anxiety, precious little to be bullish about, and we all have seen even less from our political "leadership" which might cause even the hint of increased confidence in them.

About the only thing we have seen enough to be bullish about is Gold – because it is now so darn easy to be bearish of most all fiat currencies longer term and even more bearish of the poorly chosen elitist, vote-pandering, freedom-stealing, Big Government-loving narcissist cast and crew currently in charge in Washington.

As bad as that seems, we sense it is patently good for Gold Investment longer term, but everyone already knows what is in the news. Let's look at what some of the indicators are telling us.

Looking at last week's price action – and with the HUI index of gold and silver mining stocks running red – we have to note the extremely high Gold/Silver Ratio, now standing near 70. While gold turned in both a higher high and high low last week, silver could not answer. Short-term the table sends us a confused and more mixed up message than we like, but long-time readers know we view a GSR over 70 as an opportunity to Buy Silver. (More about that below...)

Longer term, we still see nothing which undermines the secular bull market thesis for gold metal. With the short-term trading portion of our money, we plan to stay opportunistic for gold, waiting like patient vultures for a juicy opportunity to redeploy our short-term trading ammo, glad that we hold long-term physical metal in our arsenal.

We will have more about our positioning in the linked charts below and likely on the web log later this coming week. As we like to say, we are like a bird dog on point waiting for a re-entry sign. 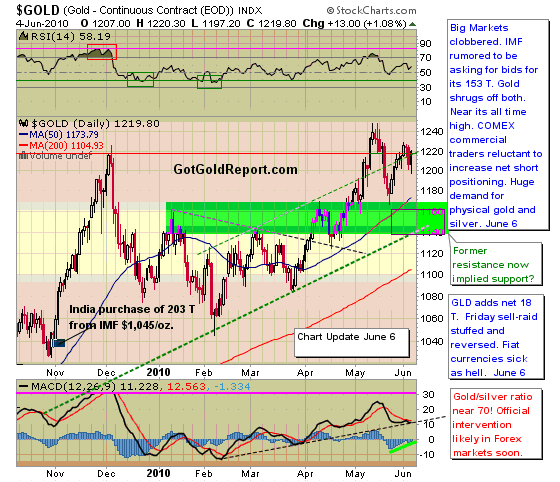 Gold bounced at the very top of the zone we thought might be former resistance morphing into current support, but it has so far not managed to get into our "wheelhouse" (the purple box target). Demand has just been too strong, even in US Dollar terms. As strong as it has been in greenbacks, it has been even stronger in terms of Euros.

We will continue to tentatively mark the high $1150s as potential support for gold – with resistance now near $1250 – until proven otherwise on both counts.

Silver is a little different as far as we are concerned. Commitment of Traders data, released by US regulator the CFTC on Friday, does not suggest that the Big Sellers (BS) have been aggressive on the short side of the second most popular precious metal. Despite some modest negative money flow from the largest silver ETF, we sense that demand for physical silver in bar form has ramped up considerably over the past two weeks. We are privy to rumblings in the rumor mill of plans by "major players" to accumulate substantial amounts of the white metal – most likely through the Comex in New York, but probably also in the London physical camp.

This is not the first time such rumors have circulated. We heard similar stories in April and again in May. It is not the silver accumulation story that we are interested in so much as its longevity. Rumors that don't die are usually not just rumors.

As for Gold Futures, while gold added $21.59 or 1.8% per ounce to $1,225.62 as of last Tuesday's reporting day, Comex commercial traders – meaning "gold industry" players who are typically bearish on prices, since they are in the business of selling it – actually reduced their combined collective net short positioning (LCNS) by a small 756 contracts or 0.3% from 268,379 to a still high 267,623 contracts net short.

So, as the number of open contracts was dropping largely and quickly, the LC's were not really the ones doing the dropping, so to speak. Nevertheless, when we see a decrease in the LCNS on a substantial increase for the price of the metal, we don't normally view that as a bearish signal. Had we seen an increase in the LCNS with the increase in the price of gold, it would have "seemed" normal. What we got instead was the opposite – a little. 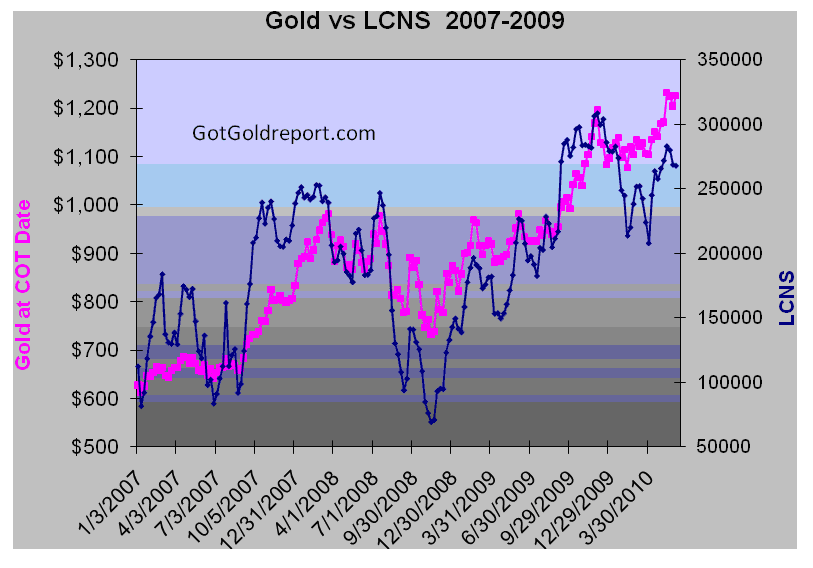 Since last Tuesday, gold met with dogged resistance in the upper $1220s, but a very determined sell-down attempt on Friday, June 4 during the post non-farm payroll disappointment rush to liquidity – one which drove gold below $1200 briefly – was met with equally determined bidding.

Here's the LCNS:TO graph for gold: 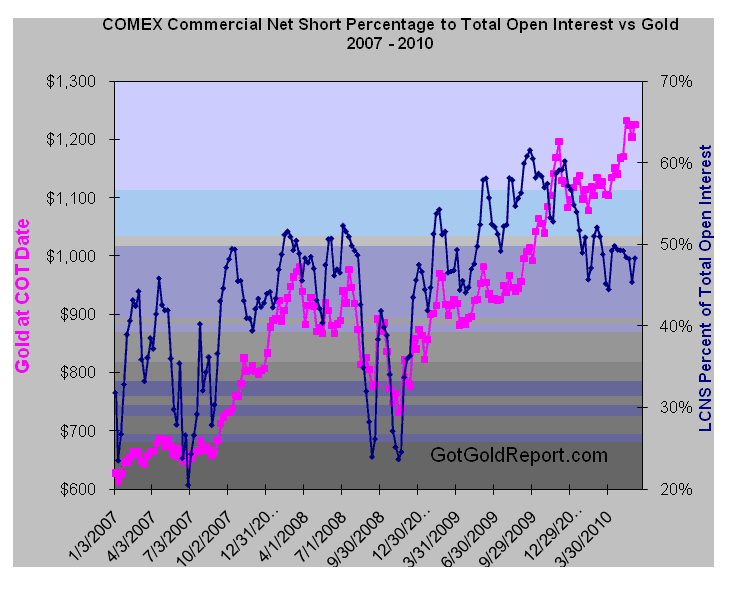 Since last week's report gold is $21 higher, the LCNS is a little lower, but the open interest dropped considerably.

As of Thursday the open interest had fallen a bit more to around 548,000 contracts, meaning there is more bull-side "horsepower" potentially than there was a week ago. The flip side of that Gold Coin is that it also means some of the buy-side has pulled in their bets.

We don't like being on the sidelines with our short-term ammo on gold, but since we believe gold is in a long-term secular bull market and more likely to surprise to the upside than the opposite, we have but three possible positions. Long, leveraged long or flat – never short in a bull market (except to hedge). Thus, our current stance at the GotGoldReport of waiting patiently for opportunity with gold for our short-term ammunition.