END_OF_DOCUMENT_TOKEN_TO_BE_REPLACED

The GOLD RALLY that began last fall and drove Gold Prices through $1200 in late November doesn't seem to be panning out the way the rallies of 2005 and 2007 did, says the Gold Report.

With a career spanning three decades in the investment markets, and annual host of the New Orleans Investment Conference, Brien is stoked on silver too, as he explains here...

The Gold Report: It's been a fun quick ride up to $1200 gold and another little correction. Where do you see us going from here?

Brien Lundin: Quite honestly, I'm still trying to figure out that myself. I rarely make specific price predictions, but let myself be goaded into it by the power of the rally that began last fall, when we burst through $1000 and just kept going up. It was a very close analog to the two previous breakouts that the metal had exhibited in 2005 and 2007, each of which followed nearly a year-long price consolidation. I believe those rallies took the price up 75% and 56%, respectively.

Based on those performances, I projected that the rally that began in the fall would take gold up to between $1350 to $1500 by sometime this spring. We traced those three rallies, the first two plus this one, in an analog chart that we published a couple of times in Gold Newsletter. It's in the current issue, in fact. 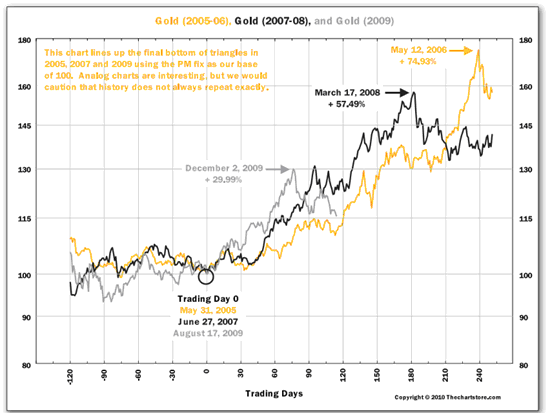 That chart shows the correction that gold underwent this January-February kind of broke the trend that the two prior rallies exhibited. So this is a crucial time.

It's not that hope is lost, because the recent recovery in Gold Prices has me heartened a bit. But this rally is in danger of failing unless the metal really continues upward now and in the near future. I think we really need to clear $1250 over the next six to eight weeks to validate the continuance of this as another one of these major gold rallies. If that happens, I'll put that $1350-to-$1500 target back in place for this run.

TGR: Ian Gordon, who founded the Longwave Group, is looking at the Dow getting down to 5250 this year, having a correction and then starting to move down toward 1000. He sees gold as the ultimate safe haven and, of course, moving the opposite direction. What's the possibility that could be the catalyst to gold's move up to $1250?

Brien Lundin: I can see just about anything working in gold's favor right now. Very roughly, very generally, if you look at the two possible scenarios facing the US and the world economies right now, you essentially have two options. One would be recovery; the second would be relapse. Under either scenario, although there would be some extreme – and I stress the word "extreme" – volatility involved, gold would end up the winner in either case.

If we had an economic recovery, the Federal Reserve in the US, for example, would be reticent to raise rates to strangle that nascent recovery. So we'd still have a very easy-money environment, despite what the Fed may say now. That recovery would prompt bank lending again and there's about a trillion dollars of excess bank reserves just hovering over the US economy, like an ocean in a water balloon. Just the start of bank lending would turn those excess bank reserves into new currency, into liquidity overflowing the economy. That would be highly inflationary and bullish for gold. In addition, any type of economic recovery would be bullish for commodities in general and gold would benefit from that, as well.

So either path would end up, over the long term, being bullish for gold. However, again, that would be a very bumpy road, especially if we went into an economic relapse, because there would be liquidity crunches. As you know, those have not been very good for gold or gold investors in recent history.

TGR: So it's that liquidity need again.

Brien Lundin: Yes, absolutely. If you remember back in September of '08 we were really just a hair's-breadth away from global bank runs. People were rushing for the safety of gold bullion and cash and were shying away – running away, in fact – from equities or any other type of paper investment.

TGR: And, of course, the next black swan could arise from what's going on in the European Union with Greece and Ireland and Spain, some of these other countries.

Brien Lundin: Absolutely. You won't see this angle really reported much in the mainstream media, but it reflects on fiat currencies in general. In the current environment, where many if not most of the world's currencies are being looked at askew, the dollar is the healthiest one standing and it's not looking so good itself. It's only a matter of time before the world's investors and savers, to an even greater extent, look at the dollar and say it's no great shakes either. What's left? Gold.

Brien Lundin: That's already happening to a growing extent, especially outside the borders of the US And it's not just in Asia, but also in Europe.

TGR: So you obviously believe that investors should Buy Gold, but I'm assuming also you believe there are some opportunities in Gold Mining stocks.

Brien Lundin: I do, and partly that's because I don't really forecast the type of equities crash that Ian anticipates, although we think very much alike in the terms of the value of gold and the future of gold-oriented stocks. In particular, I focus a lot on the special situation stocks, the juniors that are actually exploring and finding gold, or are on the verge of major discoveries.

TGR: Going back to what you said earlier about see gold up to $1250 in the next six to eight weeks, if that's the case could silver could have a run to, say, $20?

Brien Lundin: Oh, absolutely, to $19 at least. The gold-silver ratio has gotten out of whack once again and silver's just due for a bounce. I may have seemed a bit pessimistic on gold. I am worried about it, but over the last couple of weeks it seems to me that gold has exhibited a real desire to take off. All that's really kept it back have been headlines here and there about tightening in China, etc. That's exacerbating the volatility in speculative, derivative gold – speculators going in and out of the Gold Futures markets. Overseas and worldwide outside the US, we've seen very strong physical demand and some of the commercials have begun rolling back their short positions. So from a technical standpoint, gold looks fairly positive in the short term.

TGR: But you're even more positive on silver.

TGR: All right. Finally, Brien, what's your take on the rare elements story? Is it a bubble or is it just the beginning?

Brien Lundin: I think it's very similar to the uranium story of a few years ago, where the logic is inescapable, but the timing is indeterminate. It obviously got ahead of itself last year, and I think our good friend, Jim Dines, had a good bit to do with that. It was kind of a self-fulfilling prophecy, but as usual, he was very smart in pinpointing an area that deserved attention. So I think it's going to be here for a while, but be cautious and play it correctly.

TGR: As usual, you've been very enlightening and full of lots of ideas for our readers to digest. We appreciate it.

Brien Lundin: It's always a pleasure.