END_OF_DOCUMENT_TOKEN_TO_BE_REPLACED

Action in silver & Gold Futures positioning is the most favorable since July '09...

The LARGEST of the largest traders of Gold Futures on the Comex in New York continued to drastically reduce their net short exposure to both gold and silver last week, reports Gene Arensberg in his Got Gold Report for the Gold Newsletter.

A net short futures position – which is the sum difference between a particular group's bullish and bearish bets – increases in value if prices of the commodity declines, and vice versa. Some veteran investors track this positioning amongst the very large actors, using it as a predictive gauge of future buying and selling pressure.

Others believe that positioning has no predictive value. But we believe that the commercial players' "commitment of traders" data – reported by the Commodity Futures Trading Commission (CFTC) each week – is one of many important gold and silver indicators, and one that is moving into a more bullish than bearish structure right now.

In Gold Futures, the net short positioning of large commercial traders (LCNS) has not been this "small" since September of last year, with gold then trading in the $950s. For silver futures in New York, the always-short commercials haven't held fewer net short silver positions since July of 2009, with silver then in the $13.70s.

That is only part of the story as we return to a bullish bias for gold, up from neutral. Those Got Gold subscribers who checked out latest technical charts at the start of last week saw we switched to "cautiously bullish" on Feb. 5th, with gold in the $1050s, immediately after Gold Futures traded harshly down – back to where India bought 200 tonnes of gold from the International Monetary Fund (IMF) in October.

We had been neutral on gold since our 2nd December 2009 report, as gold flirted with $1200 the ounce. But in our last full report two weeks ago we said "that may change very shortly, depending on how the gold market behaves over the next few trading days to two weeks." 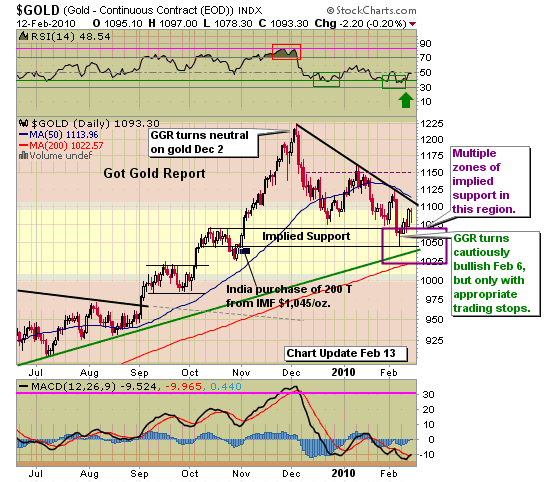 So far so good, as gold has indeed bounced up off the implied support range indicated, slightly insulating our new positioning. We note several corroborating signs in a number of the indicators we rely on.

The very large reductions in commercial net short positioning has to be the big news of this week's report and that's why it takes the lead.

Indeed, since gold challenged the $1200 level in early December, Comex Gold Futures commercial traders have now reduced their net short positioning by 31% as gold corrected a net 10% in price. The story is similar for silver.

Could we be wrong or early? Could we see further material declines in gold, silver and mining shares? Yep. But we are uncomfortable on the sidelines now, and no human can see the future. We certainly could be proven wrong, early or both. The best we have to work with are probabilities and our experience. Our trading stops take care of the rest.

Looking to Buy Gold and trade it at the lowest costs possible live online? Slash your fees – and get direct access to the trading spread – only at BullionVault...

A land developer, professional numismatist, self-taught bullion trader and investor since 1980, Gene Arensberg analyzes technical and fundamental developments in the precious metals markets. In 2000 Gene started sharing his own market research with fellow traders and fund managers. Those email reports evolved into his popular Got Gold Report, a biweekly look at important indicators for gold and silver published on the web. Gene's more in-depth market reports, insights and trading ideas are available at GotGoldReport.